1) The tribal diatribe by Monica Mutsvangwa aimed at Archbishop Robert Ndlovu is unacceptable hate speech that should be condemned by every right-thinking Zimbabwean. The statement made by the Catholic Bishops did not communicate a personal position by Archbishop Ndlovu 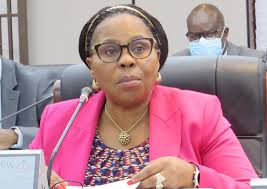 2) but a collective concern by Catholic Bishops as shown by the number who signed the statement. How a whole government spokesperson turned it into a personal letter warranting a tribalised, hate-filled & savage attack on the person of Archbishop Ndlovu is astonishing & betrays a

3) divisive & tribal regime whose modus operandi is rooted in fanning tribalism & labelling to justify attacks on perceived enemies. I went thru the statement & saw the concern by the Bishops for national cohesion, peace & stability built on the ability to speak the truth among

4) ourselves as a people & the need for leaders to be empathetic servants. The letter is a call for leaders to “fill the gap” between what our situation is & where it should be. It is a loving call for responsible leadership which can only annoy criminals & thugs masquerading

5) as leaders. Only thugs, criminals & corrupt leaders feel attacked by such an honest statement that I feel came from a very honest & love-filled place. Any leadership that is worked up by such positive criticism is not only devilish but not fit to lead a country like ours.

6) We have seen some Bishops praising the current Zim leadership & being given raving reviews on state media platforms & we thought the same leadership will accept criticism from other Bishops in the same way they entertain those that rub their egos. We thought

7) as political leaders, servant leaders as some govt officials claim they are, they know that they are not infallible, they are not Saints & therefore should be grateful to those that criticise them when they err. Aren’t they the same people who said “The voice of the people is the

9) I reiterate that the savage attack on Archbishop Ndlovu by Monica Mutsvangwa is regrettable. The attempt to portray Archbishop Ndlovu as fanning tribal hate in the form we saw in Rwanda is ironic, especially when Zimbabweans know that one leader in the current regime

10) fanned tribal hatred similar to the hate speech by Leon Mugesera, which precipitated tribal hate that led to the genocide in Rwanda. We know who called Ndebeles “cockroaches”. We also know who threatened to shorten people’s days on earth. We are concerned when individuals

11) representing such a character begin to attack an Archbishop based on his ethnicity. We condemn that. If these characters attacked some people based on their ethnicity in 1983-87, this is 2020, we will not take that. Never again shall a Zimbabwean be silenced on account of

12) his or her ethnicity. We refuse to be divided by a rogue regime. We are one Zimbabwe & we have freedom, enshrined in our constitution, to criticize government policy, whether one is Ndebele, Zezuru, Karanga, white, yellow or blue, that right is for us all. Mutsvangwa owes

14) given, much is expected. If Zanu-PF believes Zimbabweans gave them the mandate to lead, which I doubt they did, judging from the behaviour of Mutsvangwa as govt spokesperson, people expect delivery. If they fail, the same people criticize them, that’s how it works & that’s

15) the price we should be prepared to pay as leaders. Those that don’t want to be criticised should never be leaders but ice cream vendors. Let those with the heart & temperament to lead, be in leadership. Leadership is never for shrill-tongued squirrels but for grounded & sober minds