President Robert Mugabe’s government plans to seize control of foreign-owned mines without paying for them as part of a program to accumulate $7 billion of assets following his July 31 election victory, a minister said.

The government will compensate bank owners as it takes control of their companies, Saviour Kasukuwere, the minister in charge of the program to compel foreign companies to cede 51 percent of their assets to black investors or the government, said in an interview in Harare, the capital, today. His comments echo a suggestion made by Mugabe earlier this year. 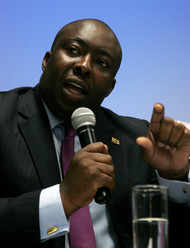 Indiginization Minister Saviour Kasukuwere said the government does plan to compensate bank owners as it takes control of their companies. Photographer: Jekesai Njikizana/AFP via Getty Images

“When it comes to natural resources, Zimbabwe will not pay for her resources,” Kasukuwere said. “If they don’t want to follow the law that’s their problem.” Non-compliant mine owners risk losing their licenses, he said.

Anglo American Platinum Ltd. (AMS), Impala Platinum Holdings Ltd. (IMP), Barclays Plc (BARC) and Standard Chartered Plc (STAN) are among companies that operate in the country. Other industries may have to yield smaller stakes to black owners, Kasukuwere said. Metals and minerals, including platinum and gold, accounted for 71 percent, or $719.9 million, in exports in the first four months of this year, the state-controlled Herald newspaper said, citing the finance ministry.

Anglo American Platinum, the world’s biggest producer of the metal, and Aquarius Platinum Ltd. (AQP), which owns a stake in a Zimbabwe mine, declined to comment, while Impala’s didn’t immediately respond to e-mailed questions.

Shares of Impala and Anglo American Platinum fell 2.7 percent and 1.6 percent as of 2:23 p.m. local time in Johannesburg. Barclays Bank of Zimbabwe Ltd. declined 20 percent by the close on the bourse in Harare.

The government and black Zimbabweans will take half of the value of assets it has identified in the economy, he said. The state empowerment fund has so far acquired about $1 billion in assets, he said.

The government will open a new stock exchange to trade the black-owned stakes in the companies, he said. Trading at the Harare Stock Exchange, which would rival the Zimbabwe Stock Exchange, may start within 100 days of the new government taking office and will only be open to black Zimbabweans, he said.

Investments in Zimbabwe will be protected by the government as long as companies do not seek to exploit the country without its people benefiting, Kasukuwere said.

“We want to welcome investors, as long as it’s in partnership with our people,” he said. “It’s a logical economic plan that has been put forward by our party for Zimbabweans to achieve greater benefits from their resources. Forty-nine percent is a huge part of the cake.”

Investors in the country are unduly concerned about the safety of their assets, Kasukuwere said.

“If you bring your dollar into the country it remains your dollar,” he said. “We are not going to grab anybody’s assets.”

Other industries, such as telecommunications, will be required to give up a smaller stake, Kasukuwere said.

“This is an initial shock but they have to get over it,” Kasukuwere said.

Most banks in the country have stopped issuing new loans because of concern over future policy, two chief executive officers said yesterday, declining to be identified because they didn’t want to anger the government.

“They’ve been very unreasonable,” Kasukuwere said. “We’re putting in place a corrective policy in terms of conducting their affairs.”

Mugabe’s victory was announced on Aug. 3 by the Zimbabwe Electoral Commission.

“Over the next five years Zimbabwe is going to witness a unique wealth-transfer model that will see ordinary people taking control of the economy,” Mugabe’s Zimbabwe African National Union-Patriotic Front said in a statement handed to reporters in Harare today.

To contact the reporter on this story: Franz Wild in Harare at fwild@bloomberg.net

To contact the editor responsible for this story: Nasreen Seria at nseria@bloomberg.net

via Zimbabwe to Seize Mines While Compensating Banks – Bloomberg.