Those concerns took on greater significance Monday when the nation’s stock market suffered its largest one-day decline since 2009.

Harare-based economist John Robertson believes the hopes of business leaders there were quashed when Mugabe took a 61 percent majority of votes last Wednesday in a heavily-criticized election. 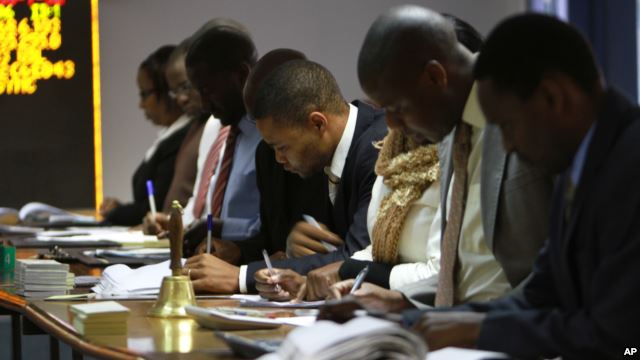 Traders work at the Zimbabwe Stock Exchange in Harare, Aug. 6, 2013. The country’s stock exchange lost more than 0 million in value after plunging 11 percent on its first trade following the announcement of the country’s election results.

“I believe the whole business sector was very much hoping for a change that would’ve led to a different political party with different policies,” Robertson said. “And so there’s a lot of dismay, and a lot of seriously discouraged business people right now who are wondering what step they can take to survive. And those that were contemplating coming here, I believe that every one of them has decided not to.”

Robertson expects investment in Zimbabwe to slow as Mugabe and his ZANU-PF party implement further economic policies aimed at handing foreign business interests over to Zimbabweans.

The party’s signature policy, called indigenization, aims to transfer the majority share of any business operations to black Zimbabweans without financial compensation. Critics of that policy said it also favors Mugabe loyalists.

Mugabe’s re-election and ZANU-PF’s win of two-thirds of parliament seats seem to be a clear mandate for indigenization to proceed at full pace. The Zimbabwe Stock Market’s 11 percent decline Monday appeared to verify the predictions by critics of the policy.

But the economy stabilized after a conversion to the U.S. dollar and the formation of a coalition government between the ruling ZANU-PF party and the opposition Movement for Democratic Change.

Some analysts, however, sid unwise economic policies could hinder such progress.

Some experts said Zimbabwe could have a vibrant economy if not for its current policies.

“Without doubt Zimbabwe would be a very much more enticing place,” said Azar Jammine, chief economist at the Johannesburg-based consulting firm Econometrix. “It has a very strong mineral sector unlike South Africa…Zimbabwe to some extent could be regarded much more as virgin territory that has not yet fulfilled its full potential by any means both in term of minerals and in terms of agricultural development.”

The political intent to further indigenize industry and commerce in Zimbabwe could scare investors away.

“For people looking at investing in Zimbabwe, it’s certainly going to be a short sell for now,” said George Nicholls, chief executive of the global consulting firm Pasco Risk Management. “If people are invested, they do face the distinct possibility of having to compromise and do deals, local indigenization deals, under pressure of losing assets for little or no return…The prospects facing potential investors are slim to unattractive.”

Investment rose after the formation of the coalition government. From 2008 to 2011, foreign direct investment grew from around $50 million to nearly $400 million. But Robertson said now outside companies will not be eager to hand over a 51 percent stake to Zimbabwean shareholders.

But while some business might be scared off, others could benefit.

“I would anticipate an in-swing of people who supported ZANU-PF,” said Nicholls, “such as Chinese investors, Indian investors, Russians, the BRICS nations in general, will be looking to take up opportunities there on the basis of the support they’ve rendered to the Zimbabwe government over the past four years.”

At this point, however, it is not clear when or how such investment will be forthcoming.