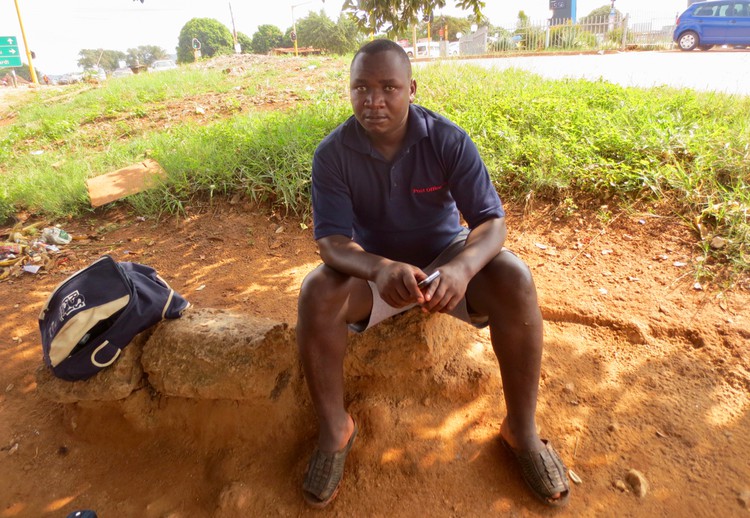 Tevera Mucheka lost his bakkie and the house he has rented for over 10 years in a xenophobic attack.
Image: GroundUp/Bernard Chiguvare

A number of Zimbabweans who had been living and working in Tshino village, Thohoyandou, Vuwani, have moved to other areas of Limpopo or returned to Zimbabwe after xenophobic violence erupted last month.

Police spokesperson in Limpopo Col Moatshe Ngoepe said about eight houses belonging to immigrants had been torched on the night of March 17. Two suspects were arrested and are to appear in court on April 25 on charges of public violence, malicious damage to property and arson.

Some Zimbabweans were accommodated by their employers on farms in Levubu several kilometres away.

“I miss my fellow Zimbabweans. We used to stay as a family but we are now scattered in Limpopo,” said Tevera Mucheka. He lost his bakkie and the house he has rented for over 10 years. He has now moved to Duthuni, 20km from Tshino village.

“I lost my Zimbabwean passport, driver’s licence and customers who usually brought cars for repairs,” said Mucheka, who is a mechanic.

“I have to start all over again … My previous employers donated clothes and food,” he said.

He did not know why his home was torched, but said the crowd had shouted that “they no longer want Zimbabweans around”.

“Since 2008, foreigners have been subjected to such attacks and we do not notice any meaningful intervention from the government,” he said.

Spokesperson for the Limpopo premier Kenny Mathivha said: “Compared to other provinces, Limpopo has had less such attacks because of its integrated communities. For example, you can’t have such in Musina because SA citizens in Musina have relatives in Zimbabwe and speak the same languages. In Giyani and Phalaborwa, it’s difficult to distinguish a Tsonga-speaking person from a South African or Mozambican; same with Lephalale – the Limpopo people in that area speak Setswana.”

He said the department of community safety had been dealing with the attacks and liaising with the district municipality.

Vhembe district mayor Mavhungu Lerule-Ramakhanya said immigrants should register any business operations with the council so there would be no question about them since they’d be ratepayers.