By arresting a prominent corruption-busting reporter, the Zimbabwean government has once again demonstrated its intention to use the law as a political weapon to criminalize journalism. Finally, the international community is seeing behind President Emmerson Mnangagwa’s lofty rhetoric and recognizing the true nature of his regime. 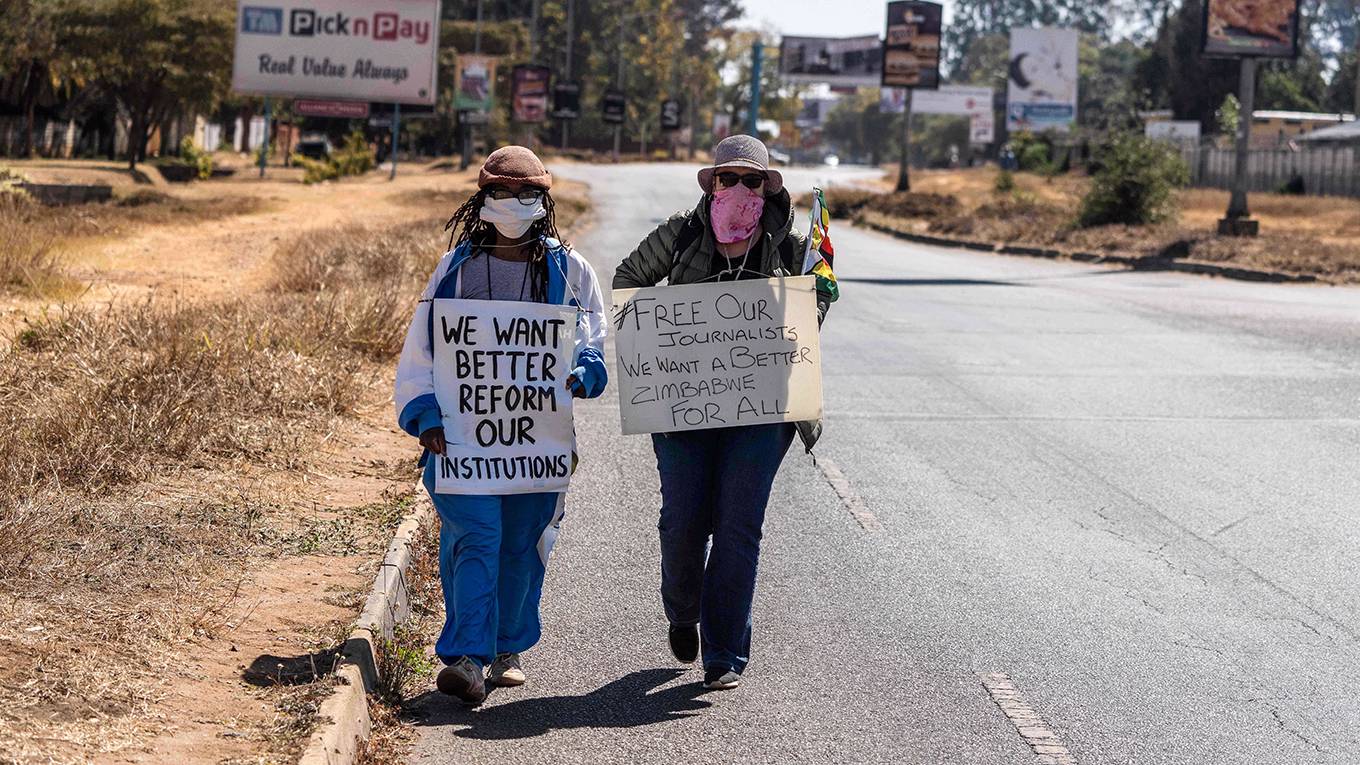 PARIS – On July 20, the Zimbabwean authorities arrested the internationally renowned investigative journalist Hopewell Chin’ono and charged him with “incitement to participate in public violence.” But Chin’ono’s real crime was to expose – in collaboration with Mduduzi Mathuthu, another journalist now facing arrest – alleged procurement fraud at the health ministry involving COVID-19 medical supplies.

After Chin’ono was arrested, Magistrate Judith Taruvinga signed an overly broad warrant allowing the authorities to search his home for “illegal documents and other articles kept at the house.” About 30 armed police, brandishing an additional warrant, later raided Chin’ono’s home and seized his camera. By contrast, Moyo was subject to no such raids or searches.

By arresting a prominent corruption-busting reporter, the Zimbabwean government has once again demonstrated its intention to use the law as a political weapon to criminalize journalism. Finally, the international community is seeing behind Mnangagwa’s lofty rhetoric and recognizing the true nature of his regime.

For all his attempts to burnish his government’s international image, Mnangagwa is simply following the authoritarian playbook of his longtime predecessor, Robert Mugabe. This should come as no surprise: Mnangagwa had been Mugabe’s special security assistant for 40 years before becoming president following the 2017 military coup that deposed his mentor.

When Mnangagwa began what he unabashedly calls his “reign,” an international community exhausted by Mugabe’s villainy was hankering for rapprochement and partnership. Investors envisaged a new era in which the authorities would implement predictable rules, clean up pervasive corruption, and rein in rent-seeking officialdom. Mnangagwa played along, declaring that Zimbabwe was “open for business.”

Just over two years later, however, Mnangagwa’s pretense has fallen apart. Matching Mugabe’s cruelty and entitlement, but lacking his erstwhile patron’s eloquence and intelligence, Mnangagwa has revealed himself to be a clueless buffoon with a cartoonish sense of his own invincibility.

The world can now see clearly what was always obvious to discerning Zimbabweans: the 2017 coup was no act of self-renewal by the ruling ZANU-PF party, but rather stemmed from the impatience of a political heir eager for his own turn to maim, steal, and kill.

After all, how can the regime claim to be open for business following its treatment of Chin’ono, whose exposé alleged that Mnangagwa’s son was connected to the procurement scandal? What “second republic” and “new dispensation” bombast can still sound meaningful after government security agents’ recent abduction and sexual assault of three young female opposition leaders, who were then arrested for supposedly faking the episode? What posturing about political reforms can be sustained when the regime, continuing where Mugabe left off, has gunned down peaceful demonstrators, manipulated elections, and committed torture and other crimes under international law?

The regime knows that charging Chin’ono with inciting public violence is legal hot air, so it is punishing him through pretrial travesties. As Amnesty International’s Deprose Muchena has observed, Chin’ono’s arrest and detention are part of a broader attempt by the Zimbabwean authorities to persecute the regime’s critics.

Recently, for example, Zimbabwe’s chief justice issued judges with a directive requiring that their judgments be “seen and approved” by their superiors before being issued – a patently unconstitutional instruction, given that judges must be independent. Although the chief justice dropped the word “approved” the following day, and later, following an outcry, seemed to withdraw the entire directive, the purpose remains clear. In addition, human-rights lawyers have recently been arrested on spurious charges.

Meanwhile, Zimbabwe’s woes continue to multiply. Alex Magaisa, a lawyer, recently described how extensive official looting of a state-run agricultural support scheme had resulted in massive public debt. This followed earlier revelations by the opposition MP Tendai Biti that billions of dollars had been diverted from a separate “command agriculture” program. With nurses striking in a collapsed health-care system, and parts of the country’s hungry population calling for mass protests, the regime is in full panic mode.

The arrest on July 31 of several peaceful protesters, including internationally renowned writer Tsitsi Dangarembga and student Panashe Sivindani, rounded off a month of citizen discontent, during which Mnangagwa also announced stricter COVID-19 lockdown measures for an indefinite period. Even in a context of rising infections, the draconian rules prompted the United Nations to express concern about a possible authoritarian clampdown. The new directives impose a curfew from 6:00 p.m. to 6:00 a.m., and require all “non-working” Zimbabweans to stay at home during the day – at a time when formal unemployment is above 90%.

The Zimbabwean regime thrives on graft and lies. Mnangagwa uses the law and institutions of justice not as the testaments they should be to the ideals of belonging, fairness and dignity, but as carrots and knobkerries to wield as he sees fit.

Such behavior has now created an environment of lawlessness and injustice that is causing responsible investors to think twice about putting their money in Zimbabwe. When a regime shoots itself in the foot, as the one in Harare is doing, the foreign investment that comes to the country is typically crudely extractive: blood contracts calculated to hollow out its natural resources in exchange for supporting its rulers with tanks, guns, and ammunition, other tools of political and social repression, and fat personal bank accounts.