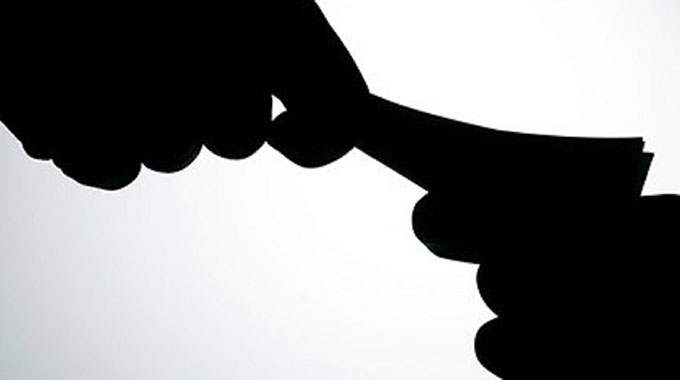 TWO members of the Zimbabwe Republic Police (ZRP) Neighbourhood Watch
Committee stationed at Karoi Rural have appeared in court for allegedly
setting up a roadblock in a bush and demanding bribes from motorists.

The accused, Mangezi Sithole (48) and his son, 24-year-old Talent Sithole,
were remanded in custody when they appeared before Karoi magistrate Mr
Felix Chauromwe on Friday.

They were facing criminal abuse of duty and extortion charges.

The matter was rolled over to August 13 for routine remand.

The complainant is Peter Kanyungwa (31), a commuter omnibus operator.

Prosecutor Mr Gerald Dhamusi told the court that on July 28, at around
2.30pm, Mr Kanyungwa loaded 16 passengers into his vehicle, and proceeded
towards Magororo in Magunje.

He drove along Karoi-Chirundu highway going towards Magunje and upon
reaching Twin River Inn, he diverted off the main road to avoid a police
roadblock at the 204-kilometre peg.

He used a dust road which passes through farms, and after driving for
about three kilometres, he was stopped by the accused pair, which was
wearing ZRP uniforms and armed with batons.

The court heard that the pair quizzed Kanyungwa why he was operating a
passenger service which was banned during the ongoing Covid-19 lockdown.

Both accused persons allegedly demanded from Kanyungwa US$20 to allow him
passage, but he indicated he could pay US$10, and pleaded for the duo to
accept it.

The cops declined, before threatening to take Kanyungwa to the highway
roadblock which he had evaded where he would face the full wrath of the
law.

Kanyungwa then phoned Karoi Traffic officer-in-charge only identified as
Inspector Shari, who teamed up with district police commander, Chief
Superintendent Helena Mahonde, who rushed to the scene.

Upon arrival, the police bosses confronted the Sitholes, who admitted they
had not been officially deployed to create and man the checkpoint.

They were immediately arrested and taken to Karoi Urban police station.

Further investigations indicated the pair had, two days earlier, mounted
another illegal roadblock on the same road stretch where they extorted
US$17 from Kanyungwa who, however, never lodged a formal police report.