In reality, the people of Zimbabwe haven’t chosen a fresh set of policies in this post-Mugabe era poll, just a new leader. 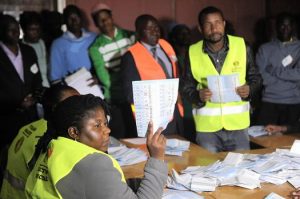 COUNTDOWN: The time it has taken for the counting of votes in Zimbabwe’s first poll since long-term president Robert Mugabe was ousted last year has caused frustration. Picture: Matthews Baloyi/African News Agency (ANA)

Zimbabweans went to the polls on Monday. I don’t think many Africans held their breath. We don’t hold anything against our Zimbabwean brothers and sisters. We wish them well as they wait for the results.

There is often doubt whether the elections will be free and fair and whether there’ll be violence as unfortunately witnessed.

Times have changed and Africans are used to voting freely. No one expects to be intimidated or threatened while queuing to vote.

Caution is usually expressed during the election campaign or when the election result is announced. If there is a time to really worry about electoral violence, it is that period when the losing candidates must accept the result.

It can go in any direction. Just ask Kenyans.

All of us were congratulating Kenyan President Uhuru Kenyatta when he invited on stage the opposition leaders to apologise to them for what he had said in the heat of the election campaign.

In some ways, many South Africans were a little envious of Zimbabwe’s independence in 1980. They had music legend Bob Marley at the independence celebrations. He even composed a song called Zimbabwe. Marley sang: “No more internal power struggle, we come together to overcome the little trouble, soon we’ll find out who is the real revolutionary.”

You cannot miss the irony of those lyrics after Zimbabwe’s politics imploded in the early 2000s.

In truth, as Africans, we are experiencing some sort of “struggle fatigue”. We find it very difficult to believe in the big ideas – the “huge freedom”, where employment is ample, equality a reality, and poverty elsewhere!

Elections were once one of those big ideas. As elections have become a normal practice and occur with regularity, we also seem to recognise that, although elections themselves are important, on their own they do not have the power to change our lives.

Politicians and their election machinery, together with the talking heads in the media and academic space, try to make election periods seem like the most important time in a country, but they have a strange way of going about it.

They make it about the political leaders. The focus is a lot more on the character, manners, and charisma of the party political leader, rather than the policies, history, ideology and values of the competing political parties.

It seems that the leader is made out to be someone with some out-of-this-world mythical powers. The party supporter seems to be entranced by the leader and, like some latter-day religious zealot, wants to be close enough to touch the leader’s sandals in the hope that their proximity to power will mean personal benefit, when the leader of the party becomes the “glorious leader” of the country.

Zimbabwe is a good example of this. There seems to be no discernible difference between the two main parties. Even though, it looks like Zanu-PF is marching to victory, the reality is that both Zanu-PF and the MDC Alliance seem to be saying the same thing. They both promise to undo former president Robert Mugabe’s policies. They want to do away with nationalisation, land reforms, and indigenisation of businesses. It is as if the leading parties are speaking more to foreign business interests, and trying to soothe their fears rather than the electorate.

The latter have “struggle fatigue”, and just want a chance to create a better life for themselves and their children.

However, if political choices are based on trust that is skin-deep and not actual policies, plans and value-laden perspectives, then we must brace ourselves for the inevitability of being disappointed.

We must not caricature politics into over-simplified sound bites. It is true, that communication has become a 140-character Twitter message. Although we should not tolerate verbosity, there is no added value if political parties are clones of each other. We run the risk of having politics without people participation.

South Africa must count itself lucky. While the party leader has become more important than at the dawn of our democracy, there are marked differences between political parties.

Some of the leading parties may have similar policies but they have different ideological perspectives. Policy variety is as important as strong opposition parties.

For this election, we can forgive Zimbabwe because of the difficulties it has endured over the past two decades. After these elections, though, we must allow the Zimbabwean government and people to sketch out a new set of policies because, in reality, the country did not choose policies in this poll, just a leader.

* Williams is the Director for Africa Affairs at the National School of Government. These are his personal views.