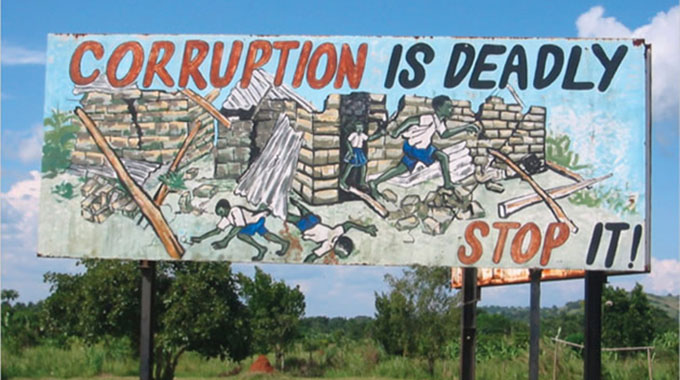 Gift Mashoko Correspondent
President Mnangagwa’s anti-corruption drive has won the hearts of many Zimbabweans. Corruption had negatively affected the socio-political and economic environment during former President Robert Mugabe’s 37-year rule. Corruption had gone unpunished as people engaged in underhand dealings with impunity. In his inaugural address, President Mnangagwa stated that corruption was the major source of some of the problems the country is and has been facing. This he said had a negative impact on national development.

Just to show how pervasive the vice had become, the Global Corruption Barometer (2013) showed that about 60 percent of Zimbabweans who accessed public services paid bribes to speed up transactions.

It also said that corruption in Zimbabwe was more pronounced in Government, the public sector, State enterprises and parastatals.

A Transparency International report of 2016 noted that Zimbabwe was losing close to a $1 billion annually to corruption. President Mnangagwa could not let the status quo continue as it negatively impacted on the economy.

President Mnangagwa’s first port of call after assuming the Presidency in November 2017 was to fight corruption by giving an ultimatum to foreign currency externalisers to return the money within three months or face the law.

The country has so far managed to recover over $300 million of the estimated $1,3 billion and more is being processed. The anti-corruption drive is yielding positives as foreign investors are being drawn to a corruption-free Zimbabwe.

So far, President Mnangagwa has managed to secure $11 billion worth of Foreign Direct Investment commitments as investors are gaining confidence in the country, aided by his commitment to fight corruption.

A number of foreign investors have visited the country and expressed interest to do business with President Mnangagwa’s administration as it continues its anti-corruption drive.

All these potential investors would not have come if the country was still steeped in unaddressed corrupt activities.

Under President Mnangagwa’s administration, the Zimbabwe Republic Police intensified its fight against corruption by launching an anti-corruption unit, which will be working with the Zimbabwe Anti-Corruption Commission (ZACC) and other agencies to curb corruption.

The Anti-Corruption Unit was launched in efforts to effectively investigate all cases of corruption.

President Mnangagwa’s administration is working on modalities to arm the Zimbabwe Anti-Corruption Commission in the fight against corruption as its lack of arresting powers has hamstrung its operations.

To date, the likes of Walter Mzembi, Samuel Undenge, Ignatious Chombo and many more accused of shady dealings have cases before the courts.

President Mnangagwa is on record stating that every case must be investigated and punished in accordance with the law and no one is immune to prosecution.

In March of 2018, the Government of Zimbabwe, led by President Mnangagwa, showed its commitment to fight corruption by launching anti-corruption courts to work in partnership with ZACC, the National Prosecuting Authority, Attorney-General’s Office, the ZRP and the Zimbabwe Prisons and Correctional Services.

The Special Anti-Corruption Courts were launched with the aim of prosecuting and making an undertaking that property acquired by suspects through corrupt activities is forfeited to the State upon conviction.

To show firmer commitment, President Mnangagwa has established a Special Anti-corruption Unit housed in his office, so all people engaged in nefarious activities beware.

The President Mnangagwa-led Government has also limited the number of police roadblocks and removed spot fines for traffic offences.

The police force was immersed in fining people for petty issues and they had become the main perpetrators of fraud and corruption and were getting away unpunished.

This was also negatively affecting tourism as tourists dreaded coming to Zimbabwe because of numerous police roadblocks.

For all that he has done in the short space of time in fighting corruption, President Mnangagwa has my vote and I am aware of many Zimbabweans who would want the country to prosper.