Chamisa charms the heart of the nation 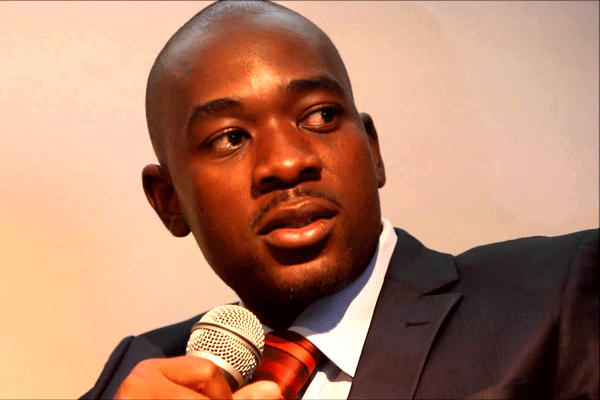 The MDC-T leader Nelson Chamisa juggernaut rolled into the Midlands province over the weekend and charmed the heart of the nation when he sketched in minute detail the incoming government’s policy programme anchored on the tripod legs of transformation, opportunity and prosperity.

The rallies in Kwekwe and Gweru on Saturday and Sunday respectively saw mammoth crowds swarming to hear the MDC Alliance presidential candidate speak on his government’s vision for the country.

As he has done in other provinces, Chamisa spent many hours on the side-lines of the two rallies engaging with students, church leaders, people living with disabilities, informal traders, and business leaders, the elderly and artisanal miners.

Chamisa took the opportunity to speak about his vision for the Midlands province, particularly Gweru, which he said will be the administrative capital of his government. He said in line with his vision, Gweru should be the seat of government because of its centrality in the country, housing such key institutions as government offices and Parliament.

He said Harare may remain the commercial capital, Bulawayo as the industrial hub of the country, Victoria Falls as the epicentre of our tourism while Mutare can remain the centre of processing and manufacturing. Chamisa said only spatial development and devolution will ensure that every corner of the country benefits and develops in line with its natural endowments and location.

In Kwekwe and Gweru, the incoming president said the new government will cause a radical shift in the governance of the country’s economy, as well as detribalising the names of our provinces to ensure that every Zimbabwean feels they are a full-sledged citizen regardless of where they are.

He spoke about the need for a lean and mean government as well as the need to ensure that government workers are properly remunerated. His government, he said, would restore the dignity of the civil servant, including teachers and health workers who have suffered largely suffered the ignominy of an uncaring government.

He said the country’s police force should will be transformed into a police services unit; a truly professional outfit not given to wantonly showing its brawn by needlessly victimising citizens, including killing them as they did two months ago.
He said the army was a national institution far much above the partisan politics that has it been made to play under the Zanu PF-led government.

In Kwekwe, Chamisa talked about giving true dignity to the country’s war veterans, adding that the democratic struggle was only aimed at completing the unfinished business of our war of liberation.

The MDC Alliance presidential candidate bemoaned the belittling of chiefs and traditional leaders by the Zanu PF government which had reduced their status to being mujibhas and chimbwidos of the ruling party. He added that the incoming government would raise the $25 monthly allowances given to village heads, which he said did not befit their status and role as the custodians of culture in our society.

He said the MDC Alliance would spearhead the fight for electoral reforms by unveiling the Plan and Environment for A Credible Election, a comprehensive set of electoral reform demands that will be unveiled in Harare this week.

Among the key demands is equal coverage in the public media, a forensic audit of the voters roll as well as an agreement by all stakeholders on the identification of the company that would print the voters roll, including a thorough investigation of the quality of the ballot paper.

It was also befitting that president Chamisa strongly spoke against political violence in Gweru, where the late veteran politician Patrick Kombayi was in 1990 shot six times in the groin by State security agents who were later pardoned by President Robert Mugabe following their conviction by the courts.

In his engagements on the side-lines of the two rallies,, the church community called for the incoming government to institute a day of national prayer in its first 100 days in office in order to cleanse the country of the State sponsored atrocities such as Gukurahundi, Murambatsvina, as well as the election-related violence of 2008.

Persons living with disability demanded that public buildings be accessible as well as a ministry or a government department specifically dedicated to deal with their issues.

In Gweru at Mutapa Hall, Chamisa took time to interact with the elderly, some of whom demanded restitution from the government for the lost value of their pension following the financial crisis of 2007. They complained about the liquidity crunch, which had resulted in some of them sleeping in bank queues to access their hard-earned money.

In response, Chamisa promised to lead a listening government that would expeditiously respond to the concerns of citizens. He said as an institution, government should have a small mouth and big ears so that it speaks less and listens more.

Chamisa, a former student leader himself, travelled down memory lane when he interacted with hundreds of students from Midlands State University and other tertiary institutions Gweru. He promised to reinstate student loans and grants to enable students from disadvantaged families to access education, which he said was a basic human right. He said his new government would guarantee free primary education upon assuming office in September 2018.

The excitement in the Midlands province — the heart of the nation — was palpable when the 40-year-old presidential candidate charmed the huge crowds that turned up for the rallies.

The Chamisa moment currently enveloping the country has seen young people who used to shun political rallies develop a sudden interest in the politics of their country.

As we drove away from the Midlands province in the late afternoon drizzle last Sunday, the deafening din of the now popular chorus at MDC Alliance rallies continued to ring in my ears.

The bellowing lyrics of “Morgan Chamisa Chinhu One” (Morgan Tsvangirai and Nelson Chamisa are one and the same thing) have become the official background track among the huge crowds that continue to revel in rapt wonderment as they eat out of the hand of the 40-year-old orator.

Indeed, there is no distinction between the master and the student; between the icon and his protégé.

The inescapable fact is that Chamisa is hewn from the same unique stone as the late political icon who left his own indelible footprints on the sands of history.

Luke Tamborinyoka is the presidential spokesperson and director of communications in the MDC led by Advocate Nelson Chamisa. He writes here in his official capacity.