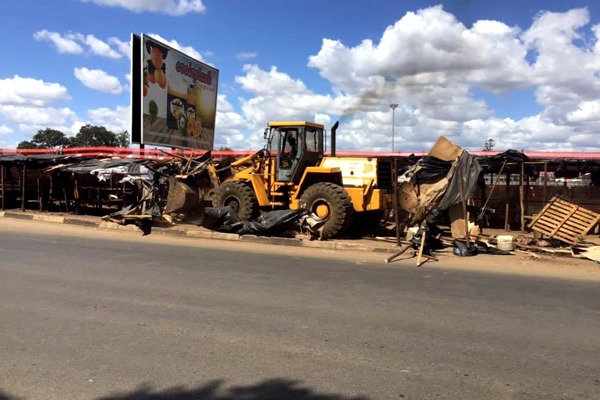 VENDORS in Harare yesterday slammed city fathers for demolishing vending stalls around Machipisa in Highfield and around Mupedzanhamo market and along Rufaro Stadium in Mbare on Saturday, taking advantage of the lockdown.

Council spokesperson Michael Chideme yesterday insisted that the affected vendors would be relocated.

He said the operation was above board and there was no need for panic by the vendors.

However, the vendors whose stalls were destroyed said council had shown a high level of insensitivity to the plight of informal traders.

“We received information that there were graders destroying our stalls and when we rushed there, we were told the structures were illegal. How come they decided to do it when we are in lockdown?

It shows something is wrong,” Hamandishe Majongwe, a vendor from Mbare, queried.

Another vendor, Timothy Taruvinga, said life would increasingly become difficult for the informal traders after the lockdown.

“We are already suffering and have exhausted all our savings during this lockdown. How will we be able to start from zero after the lockdown?” he asked.

When demolition teams got into the neighbourhood, some vendors rushed to Mupedzanhamo market intending to stop the operation, but were dispersed by municipal police.

“What City of Harare is doing is inhumane. This is not the time to ruin the little remaining investments for the poor after a 21-day mandatory lockdown. There are several ways of resolving trading challenges amicably,” he said.

Vendors Initiative for Social and Economic Transformation leader Samuel Wadzai said it was irresponsible and reckless for authorities to take advantage of the lockdown to execute livelihoods-threatening operations. He warned that vendors might stage protests over the move.