Diepsloot: Families mourn deaths of loved ones amid rising anger 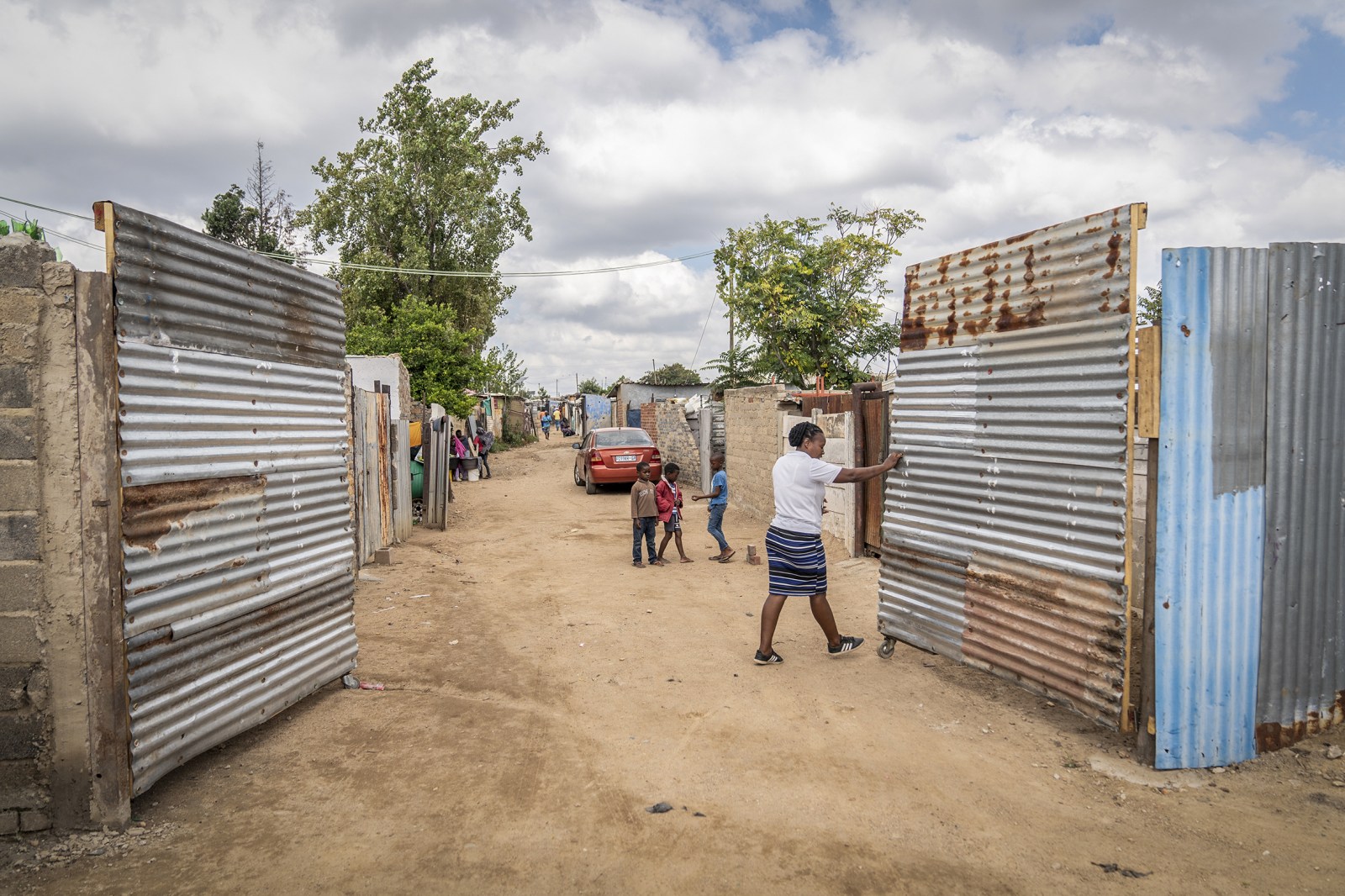 In an effort to help reduce crime residents have installed gates at the entrances of some of their roads. The gates are locked at night at residents are left with the keys to lock and unlock. Diepsloot, 8 April 2022. Photo: Shiraaz Mohamed.

At least six people have been murdered in Diepsloot in unrest in the area over the past few weeks. The killings are fuelling residents’ anger, especially against African migrants of Zimbabwean descent.

The Nzima family is one of at least six families who are mourning the loss of a loved one as a result of crime in Diepsloot. Khulekani Henry Nzima, a 29-year-old Spar employee, was enjoying five days off work when he was murdered.

“He was young. He was enjoying his life and job as he had no child or debts to worry about. Unfortunately, he was unexpectedly and cruelly taken from us. I’m shattered,” his brother Sphamandla Nzima said.

The family believes Khulekani was attacked and killed on his way home on the night of Sunday, 3 April 2022. His family told Daily Maverick that his body was found by neighbours the next morning.

Khulekani had withdrawn some cash earlier. The money and his bank cards were missing. “He was mugged and it was [by] people who knew him. They killed him so that he cannot identify them,” said Sphamandla. “I had so much confidence in him. His life has been taken by heartless criminals. His death has paralysed our entire family.”

On the claim that many of the attacks and killings in the area were being carried out by illegal immigrants, Sphamandla said: “They are not the only perpetrators of crime. South Africans commit crimes too. [In the case of] my brother, we do not know the nationality of the killers.”

The Diepsloot killings are fuelling rising anger against African migrants, especially those of Zimbabwean descent. A stakeholders’ meeting, which was also attended by Police Minister Bheki Cele and Home Affairs Minister Aaron Motsoaledi, was held near the Diepsloot police station on Friday, 8 April 2022. A speaker who claimed to speak on behalf of Zimbabweans was furiously denied an audience.

“I have never seen that level of anger before,” Motsoaledi said. “We could have easily seen another dead body. We understand your anger, but we ask that you don’t take the law into your own hands,” he pleaded with residents.

Responding to a newspaper claim that he had kicked the speaker out of the meeting, Motsoaledi said: “That man was going to be killed if I didn’t act.”

Anger and frustration about illegal immigration have been aired on social media groups. Insults, mainly between South African and Zimbabwean citizens, are frequently traded.

Following the deaths, the community of Diepsloot made five clear demands to the visiting police minister. Cele was told that more police vehicles were needed for the Diepsloot police station as well as increased police visibility, especially the tactical unit known as Amabarethe. Residents said they also wanted undocumented migrants to leave the area and told Cele that they wanted the killers behind bars.

In response, Cele said the station had received 16 cars, 20 members of the tactical unit as well as 120 law enforcement officers, including police. He said 54 illegal migrants had been arrested. He said the law enforcement officers would not leave the area until an assessment had shown the situation had improved. The first such assessment would be in three months’ time, he said.

Regarding the complaints about the apartheid-like manner in which police were verifying people’s identities, Cele urged the police to act within the prescripts of the law. He promised the community that the police would give suspected illegal migrants the opportunity to prove their legitimacy.

Much of the anger in Diepsloot has been sparked by the killings and what is seen as an inconsistency in condemning the killing of at least five people believed to be South Africans compared with the murder of Zimbabwean national Elvis Nyathi. Nyathi was killed after he failed to provide proof of his identity. He was beaten and burned to death by an unidentified mob. No arrests have been made for his murder.

There are people who feel that the murders of the South Africans did not draw as much attention and condemnation as that of Nyathi.

A number of people in Diepsloot were injured in the “crime blitz”.

“I was sleeping… I heard the door open and I screamed. I did not hear when they broke in,” said Elizabeth Thibane, a 42-year-old mother of eight. “It was around 12 midnight because I arrived at Helen Joseph Hospital around 2 am.

“The one who had a gun forced me to the floor, but I refused. He said he would shoot me if I refused and I said he must shoot… Then he grabbed a phone and powerbank in the house and asked me if he must shoot me. I said, ‘Shoot me’ — and he shot me in the stomach.”

“They swore at me and said I was making noise, but I didn’t stop screaming,” she said.

Doctors have told her the bullet is lodged in a fat-rich area in her back near her spine. Thibane said doctors told her they would not remove the bullet but said she should return to the hospital if she felt any discomfort.

Thibane said the attackers were young and fluent in local languages. She was attacked on Saturday, 20 March 2022.

Thibane, who has been living in Diepsloot for 22 years, said that when an ambulance was called, they told her they could not come to pick her up if not accompanied by police.

Helen Phala said she was away when criminals broke into her shack. Her brother, who was home alone when the criminals struck, hid under the bed. They ransacked the house and, according to Phala, stole four phones, a television set and R500 cash.

“They pulled my brother from under the bed and hit him on the back of his head with a hammer,” Phala said.

The criminals then moved on to the shack near Phala’s home. The victim in that attack was killed.

“Those in our community who burned the Zimbabwean man are hooligans. We are dealing with hooligans here,” said Amstrong Nombaba, a coordinator of Diepsloot Action SA. “We want the video of the man being burned alive to circulate on social media to expose this inhumanity. I’m saying even if the person is a foreign national or a criminal, they must not be killed. The law should take its course,” Nombaba said.

He also echoed the community’s grievances against the Diepsloot police, who are accused of corruption and incompetence.

“We don’t have police here. We will not mention names because they are our friends, but there are no police here,” said Nombaba.

“We must act responsibly in the face of such levels of anger,” Motsoaledi said. DM