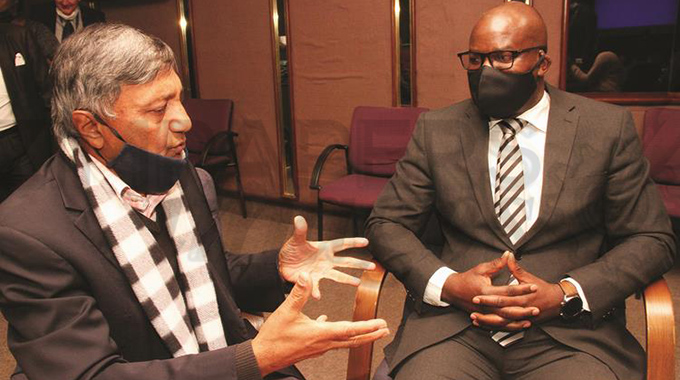 Herald Reporter
The Zimbabwe dollar eased slightly by 3.2 percent to $65.80 to US$1 in the third weekly auction run by the Reserve Bank of Zimbabwe (RBZ) yesterday with most bids moving into a tighter range and private businesses now expressing far more confidence in the new system.

The ruling rate, which is a weighted average of auction deals, has drifted from $57.36 in the first week, to $63.74 last week and now to $65.80, with the downward drift slowing as the market, designed to match export earnings to import demand through pure market forces, becomes more established and gains the confidence of both buyers and sellers.

The number of applications submitted yesterday dropped to 264 against 316 received for the second weekly auction, but was still well above the just over 90 in the first auction.

The total of bids fell from roughly US$18 million to US$15.8 million while the successful bids went down to US$13.6 million from about US$16 million last week.

Part of this was the rejection of 92 bids, partly for duplicate bidding but also because some bidders simply do not offer enough to make the list.

Companies are allowed just one bid at each auction, with all bids from operating units and subsidiaries being consolidated.

This measure was put in place to reduce the risk of speculative bidding. But under bidders now also risk rejection.

The lowest bid in yesterday’s auction was $30, but all bids below $55 missed the cut as the RBZ enforces the rule that bids are allocated in order from the top down, once any bids that do not fulfil bidding rules are eliminated. This means that those who bid in very low ranges are highly unlikely to be allocated anything.

The top bid is also falling as bidders continue to move closer to what markets suggest is likely to be the average rate. Yesterday’s top bid was $90, down from the $92 last week and $100 in the first auction. Successful bidders have to pay what they offer, and yesterday’s top bidder paid almost 37 percent above the average.

The insistence on making all successful bidders pay exactly what they offer, while at the same time eliminating those whose bids are too low to make the list for allocation from the available currency on offer, are both designed to push bidders into making realistic bids based on economic fundamentals.

Yesterday most successful bids were between $60 and $70 as more bidders read the markets and study fundamentals such as the balance of payments, local currency money supply, and Government budgeting. They then try and calculate the price that will ensure their bid is successful, in a market built around supply and demand, but without paying too far above the average.

Authorities have indicated that they expect the new market-determined exchange rate to guide pricing by businesses as new stocks with the foreign currency component paid from auction allocations reach the shelves.

Many producers and retailers were using the black-market rates in the last few months following a freeze in the official rate in a desperate attempt to calculate replacement values, but that market is small compared to the official market, is easy to manipulate, and can fluctuate wildly.

As the auction system moves increasingly into the desired equilibrium between export earnings and import demand, producers and retailers should be able to make far better predictions over what pricing levels will keep both viability and make products more affordable to their customers.

The desired pricing process has been jump-started with bread prices, which now track the auction rate following an RBZ decision to allocate currency from its own reserves to flour millers at this ruling auction rate to import wheat.

A total of US$13.6 million was allocated to various industries and sectors of the economy through the auction system yesterday, which was opened to the media for the first time as well as observers from the major organisations representing business sectors.

Once again raw materials and similar imports, such as spare parts and chemicals, required by producers dominated the allocations.

The openness is part of the RBZ programme to boost confidence that the auctions are open and transparent and are not being manipulated.

Business groups confirm that the confidence in the auction system is growing.

Confederation of Zimbabwe Industry chief executive officer Ms Sekai Kuvarika said there was positive feedback from CZI members that have been submitting bids. CZI groups industrialists, and especially the leading industrial concerns, and probably represents the majority of successful bidders.

“In my view, there is a steady increase in demand of the forex in the auction. Between the auction sessions, you can see the market is responding to this opportunity to procure forex formally,” Ms Kuvarika said.

Contrary to what has been circulating on social media, CZI said bidders were receiving their allotments between 24 and 48 hours after the auction.

“What we have received as feedback is that for all companies that were awarded their bids, their money has been paid and that brings confidence that they get their bids approved as well as early transfers of the money to their accounts.

“You can see an incremental increase in that the demand is increasing which may mean that the confidence is also increasing,” said Ms Kuvarika.

Top economist and member of the RBZ Monetary Policy Committee Professor Ashok Chakravati said circumstances surrounding the current auction are different from the 2004 setup and therefore must not be judged based on that past failure.

“I think we need to understand that the situation in 2004 and today is fundamentally different. In 2004 the RBZ tried to fix the rate but now that is not the case as we have a clear policy which is anchored on free adjudication,” Prof Chakravati said.

In 2004, Zimbabwe had no control on the national budget deficit and accelerating money supply, which increased pressure on the foreign exchange resource, a situation he said is now quite different.

The RBZ reiterated its commitment to ensure the auction dynamics continue to be determined by forces of supply and demand.

Central Bank Governor Dr John Mangundya said the auction is a process of price discovery. “There is no bias because we are allotting at own price (what bidders offer). We are using the Dutch auction system. Everyone who is buying foreign currency is suggesting their own price,” Dr Mangundya said.