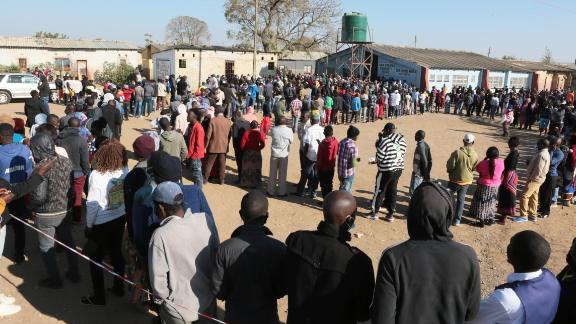 Zambia held its general elections yesterday, amid reports of violence at some polling stations, which were also characterised by long queues.

The neighbouring country went ahead with elections at a time when the Zimbabwean government has suspended holding of by-elections citing the need to adhere to COVID-19 protocols.

The opposition MDC Alliance has been pushing for by-elections so that it could reclaim its parliamentary seats lost through recalls by the rival MDC-T faction, but President Emmerson Mnangagwa’s government has been defiant claiming polls can only be held when the country vaccinated 10 million people to reach 60% herd immunity.

This is despite several countries the
world over conducting elections during the pandemic.

In the Zambian election, 16 presidential candidates contested, with the two major rivals, the incumbent President Edgar Lungu and opposition leader Hakainde Hichilema facing off for the third time.

Reports indicated that the Zambian government shut down internet amid reports of attempted rigging.

In a statement yesterday, the ERC implored civic society groups in Zambia to play their oversight role on electoral processes with impartiality.

“Zambia votes in a general election on August, 12 2021. The Election Resource Centre (ERC) and Women’s Academy for Leadership and Political Excellence (Walpe) are observing the process together with local and international observers,” ERC said.

“We are further elated that they heeded the call by the World Health Organisation (WHO) not to suspend democratic processes such as elections but ensure that such processes are conducted in adherence to protocols and regulations that prevent the further spread of the virus.”

Political campaigns were suspended ahead of the elections in Zambia after political activists failed to comply with COVID-19 protocols.

There was also political violence during pre-election campaigns. This prompted the Zambian government to deploy the army in the capital Lusaka, with reports of security officers brutalising the media and political activists.

“We urge the security services to remain impartial and discharge their mandate without fear or favour.

“We encourage them to put the security and dignity of the people first and desist from using force and intimidatory tactics. We implore the political parties and candidates contesting in the election to restrain their supporters to desist from hate speech, incitement and inflammatory messages that may disturb the processes or administration of the election.”