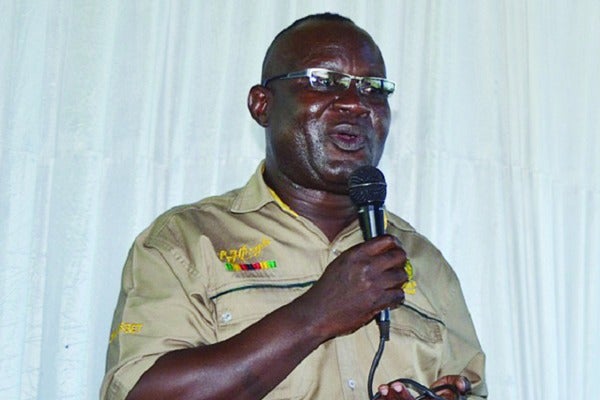 FORMER top cop, Edmore Veterai, who was voted out as the Zimbabwe Sugar Development Association (ZSDA) chairperson, has split from the association.

The bruising elections were held at Porepore Hall in Mkwasine in Chiredzi on Monday.

The tightly-contested election, which was convened by Isaac Matsilele, former Chiredzi Rural District Council chief executive officer, saw Elisha Tamirepi prevailing over Veterai
after drubbing him 74 to 60 and declared the duly elected chairperson of the association.

The correspondence read: “I take this opportunity to thank you all for the support and sacrifice to build the great brand of ZSDA over the years. I also thank you for forming
this association by contributing money and your commitment. To date, ZSDA owns a haulage truck, tractors, farm equipment, cattle, a business stand in town, office equipment,
office furniture and has employees.

“Collectively, all the property will be evaluated and all our individual contributions will be tabled to allocate shares to current and fixed assets. Following ZSDA elections
under court order 54/19, we have taken the results as per our position in court.

“ZSDA has formally split into two respectable working teams. One team is led by Tamirepi with … farmers and the other team led by Veterai with… farmers.

“We have established a working team of 10, five from Tamirepi’s group and five from Veterai’s group. Next week, they will sit down to take stock of ZSDA inventory and equitably
and proportionately recognise each contribution on residues.

“This is also the great opportunity to clearly demonstrate transparency and accountability. During campaigning, people can say anything, anyway and anyhow. We now have an
opportunity to provide documents to date and audit reports without emotions.”

Veterai could not be reached for comment as he did not respond to questions sent to him via his mobile phone.