Staff at two public hospitals and laboratories are charging between US$20 and US$40 to corruptly issue fake Covid-19 certificates to individuals, who need them for international travel, without conducting tests.

The corrupt syndicates at Chitungwiza Hospital and Harare’s Sally Mugabe Hospital involve laboratory staff, nurses and security guards at health facilities who then split the bribes.

Most institutions charge around US$65 for the required PCR test for Covid-19, a test that is required within 48 hours before leaving the country by road or air.

But to avoid the inconvenience or cut costs those wishing to cross the borders have resorted to paying US$20 bribes to health staff in order to be issued with a fraudulent certificate showing they tested negative to Covid-19.

According to the Zimbabwean regulations following World Health Organisation guidelines, travellers must produce a PCR Covid-19 clearance certificate issued by a recognised health facility within 48 hours before leaving the country.

Cross-border traders, job-seekers and others desperate for cheaper certificates are the major clients of the corrupt syndicates.

The Herald recently got a tip-off and embarked on a week-long investigation to expose the rot.

As part of the investigation, two reporters were deployed at Chitungwiza Central Hospital and Sally Mugabe Hospital where they found that corrupt syndicates were ready to issue certificates.

Health and Child Care Deputy Minister Dr John Mangwiro said those fingered in the illicit deals will face the full wrath of the law.

“I am now liaising with the permanentsecretary so that we start conducting investigations.”

At Chitungwiza Hospital, the reporter paid US$20 and was issued with a laboratory report certifying that he had tested negative to Covid-19 when no samples had been taken from him. Initially, he was asked to pay US$25 but the bribe was cut to US$20 after bargaining.

The reporter was introduced to the syndicate by some employees at the hospital and the “greedy” slow-witted team never bothered to ask how the reporter got to know of the service.

He advised the syndicate of his immediate plans to leave the country on a work trip before asking for a Covid-19 certificate.

On Thursday visitors entering Chitungwiza Central Hospital were using a small gate where like anyone else, the reporter had a temperature test.

The reporter then proceeded to the reception where he met a woman student nurse whom he had been referred to.

“We charge US$25 for a PCR Covid-19 clearance certificate and the process takes less than 10 minutes,” said the student nurse.

However, the reporter bargained for a lesser bribe, until the nurse reduced the figure to US$20.

They proceeded to the hospital’s laboratory where they met an unidentified tall male laboratory technician, who took over from the nurse.

“Let me get you a form so that you quickly fill in your personal details. From the US$20 that you have, give me US$10 so that I give the lady who has the date stamp.

“If you are not in a hurry, I will steal the stamp during lunchtime but if you are in a rush, we will just give her the US$10,” he said.

The reporter then acceded to pay the US$10 which was handed over to the laboratory technician.

He then went into the laboratory where he came out with an existing template used at the institution. 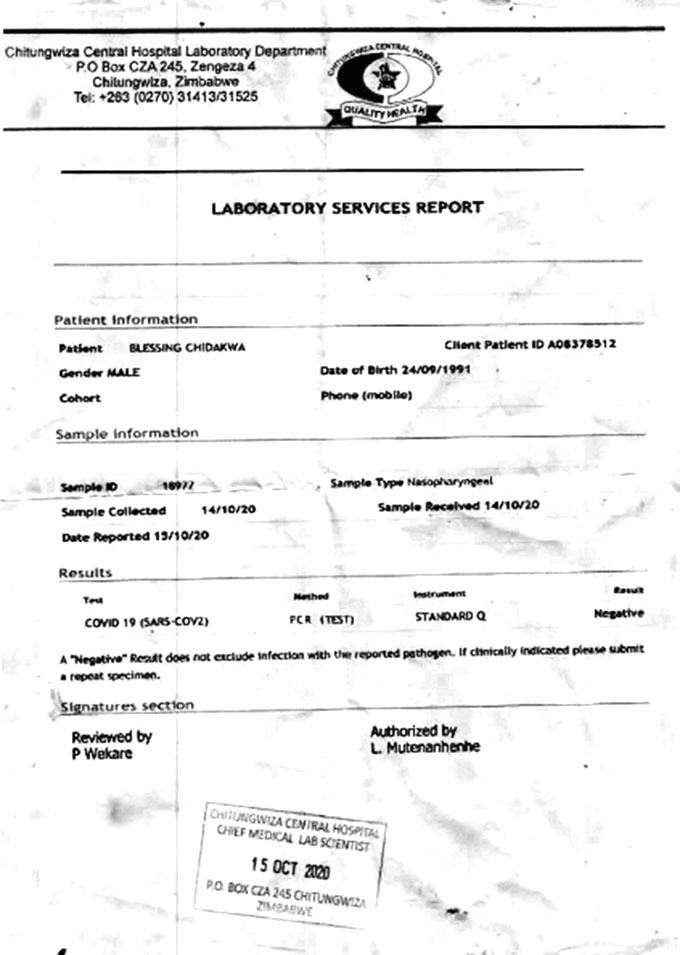 They doctored the template by including the reporter’s name, date of birth and other particulars.

Interestingly, the Covid-19 certificate was issued in five minutes despite the fact that the normal PCR test takes at least two hours.

After the certificate was produced the syndicate then demanded the remaining US$10, which was also secretly handed over to the student nurse.

However, the student nurse started pressing for an extra US$5 saying the one who stamped wanted extra cash.

The other reporter deployed at Sally Mugabe Hospital in Harare met a nurse who explained to him that the institution was only testing hospital staff.

“We do not test outsiders. We only offer the service to hospital staff. My advice is for you to go to private health centres who offer that service to all,” she said, quite correctly and properly.

But the reporter then went to the hospital laboratories where a male security guard referred him to the offices on the first floor of the building.

On the first floor of the said building, the reporter met one of the officials and a conversation began.

Asked the reporter, “Sir I am looking for a Covid-19 certificate which is required if one wants to visit outside Zimbabwe. I have been referred to this building. Can you help on how I can obtain one?’’

The official in his response said they are not offering the service to outsiders and referred the reporter to clinics for the service.

“You can go to any clinic and they will send the sample here for processing. But it takes time. When do you intend to leave the country?”

After some minutes the official said, “Okay, take my contact number so we can communicate on WhatsApp. Just save my name as Fidza,” said the official before walking away.

On WhatsApp, the reporter was furnished with the number of the person who could assist (0788242230).

The reporter dialled the number and talked to a man who did not disclose his name.

However, a check with the number’s Ecocash account showed the name of the account holder as Mathias Hlomayi.

He unsuccessfully negotiated for the reduction of the bribe.

The man, however, accepted a payment plan whereby he would get US$30 with the balance expected in a few days.

The reporter was asked to send his details on WhatsApp to enable processing of the certificate.

He was asked to send his name, surname and date of birth.

However, the writer could not pursue the case considering that he had gathered enough proof through the WhatsApp chats.

The man claimed to be an employee of the National Microbiological Testing Centre.

“Issues like that should be reported to the police so that investigations can be conducted,” he said.