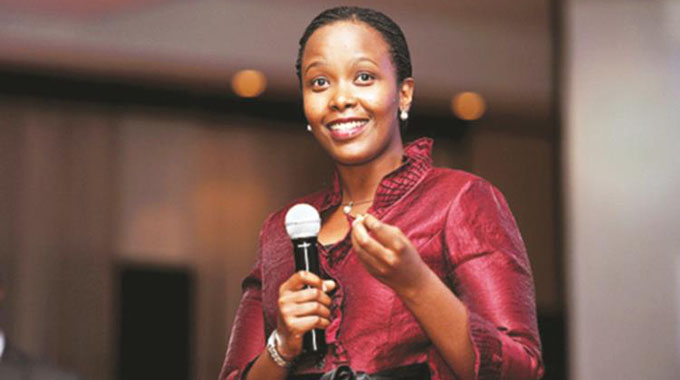 Chief executive of the Rwanda Development Board, Ms Clare Akamanzi

Tendai Mugabe Senior Reporter
Government is keen to learn from Rwanda’s development model and yesterday the chief executive of the Rwanda Development Board, Ms Clare Akamanzi, arrived in Harare to share her country’s experience at the request of President Mnangagwa.

Ms Akamanzi is set to address Cabinet members, the private sector and civil servants on how Rwanda managed to attract huge foreign direct investment within a short space of time.

Rwanda’s Ministry of Foreign Affairs, Co-operation and East African Community confirmed the visit to Zimbabwe by members of the Rwanda Development Board.

“The Ministry of Foreign Affairs, Cooperation and East African Community of the Republic of Rwanda presents its compliments to the Ministry of Foreign Affairs of the Republic of Zimbabwe and, with reference to the letter dated 29th March 2018 from His Excellency President Emmerson D. Mnangagwa, has the honour to confirm the visit of the top officials of the Rwanda Development Board, the chief executive (Ms Clare Akamanzi) and chief operating officer (Emmanuel Hategeka) during the week of 09-13 April,” reads part of the letter written to Zimbabwe’s Foreign Affairs Ministry.

Speaking to The Herald on Monday, presidential spokesperson Mr George Charamba said President Mnangagwa was impressed by the strides made by the East African country on the economic front.

“When we went to the extraordinary summit for the signing of the Continental Free Trade Area in Kigali, one key question we raised bilaterally was, ‘How have you been able to raise so much FDI in so short a time and so successfully?’ and President (Paul) Kagame said, ‘I have an institutional home where investors arrive and are received and that is called the Rwanda Development Board and you are free to interface with its CEO’, and for a good two hours the President had a whole meeting with the CEO of the Rwanda Development Board,” he said.

“We discovered that this Rwanda Development Board is led by a CEO ‘deceptively’ because in reality this is a man or woman who is of Cabinet status and that person reports straight to Cabinet. The person has executive powers to provide answers and decisions to an investor regardless of fiscal consequences.

“If they give you an area to operate from, before you start business, the land is available to you on 99-year lease, secondly there is electricity, three, there is internet facilities, fourth, there is water and a factory shell, which is designed to your requirements and you only move in with your capital, machinery and skills to set up shop under those conditions.

“‘I want this person to come to Zimbabwe to address my Cabinet, private sector, parastatals, civil servants and everyone. President Kagame’s reaction was, ‘If I don’t give you this person you end up poaching so I will rather give you. You have requested for few days, but she will be in your country for two weeks during which she will have a soaking interface with your various echelons’.”

President Mnangagwa has set Zimbabwe on a developmental path that includes attracting foreign investors, hence his popular mantra “Zimbabwe is open for business”.