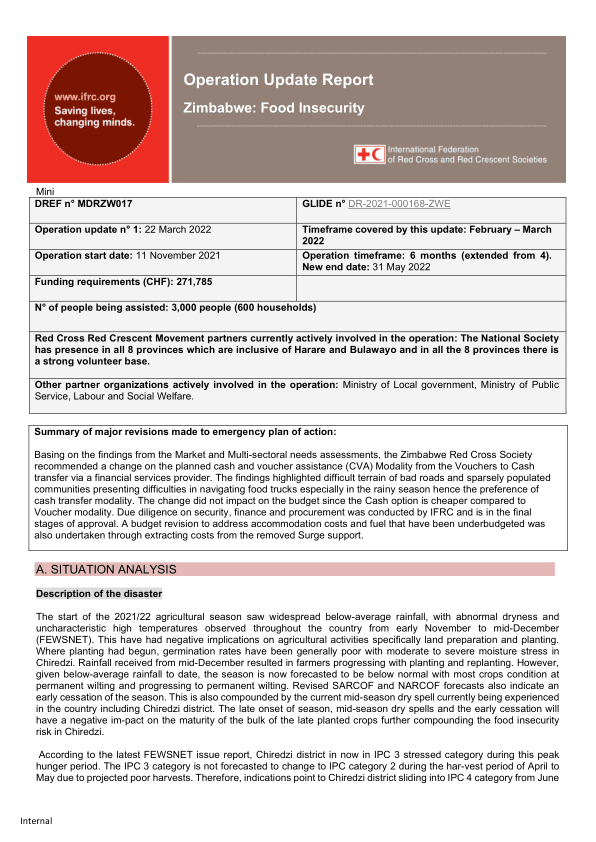 Summary of major revisions made to emergency plan of action:

Basing on the findings from the Market and Multi-sectoral needs assessments, the Zimbabwe Red Cross Society recommended a change on the planned cash and voucher assistance (CVA) Modality from the Vouchers to Cash transfer via a financial services provider. The findings highlighted difficult terrain of bad roads and sparsely populated communities presenting difficulties in navigating food trucks especially in the rainy season hence the preference of cash transfer modality. The change did not impact on the budget since the Cash option is cheaper compared to Voucher modality. Due diligence on security, finance and procurement was conducted by IFRC and is in the final stages of approval. A budget revision to address accommodation costs and fuel that have been underbudgeted was also undertaken through extracting costs from the removed Surge support.

Description of the disaster

The start of the 2021/22 agricultural season saw widespread below-average rainfall, with abnormal dryness and uncharacteristic high temperatures observed throughout the country from early November to mid-December (FEWSNET). This have had negative implications on agricultural activities specifically land preparation and planting.
Where planting had begun, germination rates have been generally poor with moderate to severe moisture stress in Chiredzi. Rainfall received from mid-December resulted in farmers progressing with planting and replanting. However, given below-average rainfall to date, the season is now forecasted to be below normal with most crops condition at permanent wilting and progressing to permanent wilting. Revised SARCOF and NARCOF forecasts also indicate an early cessation of the season. This is also compounded by the current mid-season dry spell currently being experienced in the country including Chiredzi district. The late onset of season, mid-season dry spells and the early cessation will have a negative impact on the maturity of the bulk of the late planted crops further compounding the food insecurity risk in Chiredzi.

According to the latest FEWSNET issue report, Chiredzi district in now in IPC 3 stressed category during this peak hunger period. The IPC 3 category is not forecasted to change to IPC category 2 during the har-vest period of April to May due to projected poor harvests. Therefore, indications point to Chiredzi district sliding into IPC 4 category from June as acute food insecurity looms. This scenario will likely put ap-proximately 167,500 people at the risk of food shortages; hunger and starvation, increase in grain prices; migration to neighboring countries, WASH and Health related challenges. By virtue of its geographical location being a border district, there are high chances of an influx of economic migration to neighboring Mozambique and South Africa by the affected population, food insecurity being one of the major push factors. This will have adverse implications on family links as there is most likely to be family separation resulting from inadequate resources for communication. Family separation will likely lead to child headed families as the economically active migrate to neighboring Mozambique and South Africa. Given that much of the population in the district has received only limited assistance from humanitarian organizations, there are growing concerns that the situation could deteriorate even further.