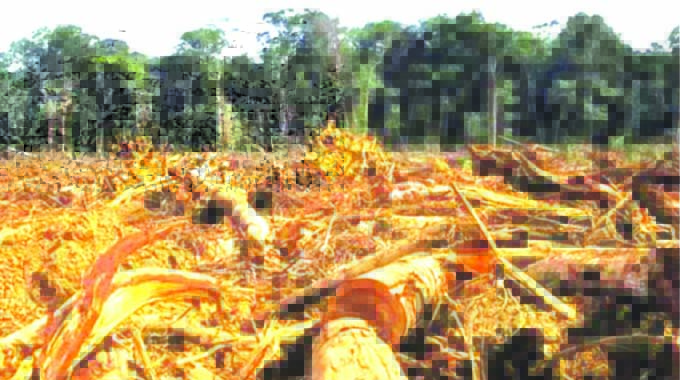 This year farmers destroyed a total of almost 60,000 hectares gathering wood to cure tobacco. In 2016, that figure hovered around 50,000ha

Climate Story Jeffrey Gogo
“We aren’t really concerned about planting trees,” says one smallholder tobacco farmer — whom we shall call Jessica — from the Headlands.

Jessica lives in Sherenje village along the highway to Chiendambuya in the Headlands, an old farming town sandwiched between Harare and Rusape, about 140km east of the capital.We are given free tree seedlings with every tobacco seed purchase, but farmers here never plant them. People have their own little pieces of forests where they cut down trees for firewood to cure their tobacco crop,” says Jessica about the practices of numerous small farmers in her village.

The area is one of the largest tobacco producing regions in Zimbabwe, and was set up by white settlers late in the 19th century mainly for trading and agriculture.

Jessica earned about $2,500 – more than double Zimbabwe’s average income – from the sale of 800 kg of tobacco during the just ended tobacco selling season, which closed on July 27.

But it is these riches that are a threat to the country’s dwindling native forest reserves.

Zimbabwe is the world’s largest producer of flue-cured tobacco after China, Brazil and the United States.

High earnings from the golden leaf have fuelled a “tobacco rush” among smallholder farmers here.

The number of farmers growing tobacco has more than doubled to 70 000 since 2011, and about 100 000 farmer grow tobacco in total, inclusive of medium and large-scale farmers, industry figures show.

Small-scale farmers account for two thirds of Zimbabwe’s annual tobacco output, which hit a record 238 million kg this year, and raked in export earnings of about $700 million so far.

But their reliance on wood fuel to cure their crops is a major cause of deforestation in Zimbabwe, an issue that has silently sailed beneath the radar amid the euphoria of record-breaking production.

Forest loss linked to tobacco is now starting to enter record territory, too, climbing five percent to 20 percent of the national deforestation total during the past two years, according to Rodwell Diwura, a spokesperson for the Forestry Commission of Zimbabwe.

Plantation forests and natural woodlands — key to stabilising the climate at both micro and macro levels — have suffered great damage at the hands of tobacco farmers, he says.

“The issue of tobacco curing is causing its fair share of challenges,” Diwura told The Herald Business, in an interview.

“Wood fuel remains the major source of energy for tobacco curing,” he said.

Some of the biggest causes of this may have to do with ignorance, poor farming practices, and, until recently, a lack of viable alternatives, Andrew Matibiri, chief executive at the Tobacco Industry and Marketing Board (TIMB), said in a previous interview.

According to data from the UN Food and Agriculture Organisation, Zimbabwe has around 15,6 million hectares of forest — much of it sparse, dry or open canopy forest.

The Forestry Commission’s Diwura said that figure has since declined to 300 000ha, not necessarily because of any greater sense of urgency to conserve trees, but because there wasn’t just that much amount of trees to continue chopping down. In Sherenje, where

Jessica, the Headlands farmer, also grows a bit of groundnuts and maize for own consumption, the evidence of forest loss is palpably gloomy.

“I think most of the farmers in this area will have to stop growing tobacco in the next few years,” she says with a self-accusing chuckle.

“People are not exactly concerned about tree planting. I don’t think the forests here will last for another three years,” said Jessica, who claims to not have fallen any trees herself, but bought firewood from those that did.

About 9kg of wood is needed to cure a kg of tobacco using the conventional barn, experts say.

That means for every half hectare with an output of 600kg, 60 full grown trees must be cut. But the Tobacco Research Board (TRB), the Forestry Commission of Zimbabwe, TIMB, and tobacco merchants have been trying to encourage farmers to switch to more efficient ways of curing their crop.

One of the most promising strategies is the TRB’s “rocket barn”, which aims to improve energy efficiency, cut firewood use and minimise pollution when curing tobacco leaves.

The barn gets its name from its ability to draw in dry air using exhaust smoke, rather like a rocket which gains its upward thrust from exhaust gases.

The large diameter of the chimney not only removes smoke from the furnace but also expels moisture from the barn.

Dahlia Garwe, chief executive of the Tobacco Research Board, says the rocket barn is designed to promote high-combustion efficiency, minimising the release of ozone pollutants into the air.

As a result, it uses 50-55 percent less fuel wood than conventional barns.

Tobacco merchants, through the Sustainable Afforestation Association, are to spend up to $35 million between 2014 and 2021, planting, on the average, 4 000ha of gum plantations each year.

The Government passed a law in 2012 restricting the use, trade and movement of firewood. It also requires smallholder tobacco farmers to establish a hectare of fast-growing eucalyptus for every 10 hectares of tobacco grown.

“The introduction of other alternative forms of energy sources such as solar power, biogas as well as care still at the inception stage,” he said.

“The tobacco industry needs to embrace these technologies that substitute the use of indigenous trees for tobacco curing.”