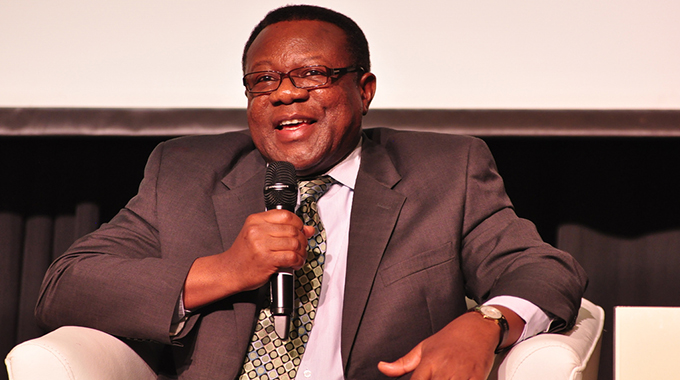 Felex Share Senior Reporter
Zimbabwe can retain to its former glory in all sectors of the economy if the momentum set up by President Mnangagwa’s administration is maintained, African Capacity Building Foundation executive secretary Professor Emmanuel Nnadozie said yesterday.

“The most important thing is for elections to go well and (with) every part accepting,” Prof Nnadozie said.
“If you get the politics right, the economy will follow. The best economic policy is good politics. That will require a number of things including good leadership. The leader will set the tone at the top to say this is a new Zimbabwe, this is where we are going and create opportunities for everybody and make the necessary investments in human capital and infrastructure.”

Prof Nnadozie said of the current administration: “It has been in charge for about six months and of course, it will be too early to pass judgments on them, but one thing that has encouraged those observing Zimbabwe is the tone at the top which is totally different from what was there.

“There is freedom for people which was not the case before. This is extremely important for a society. People ought to be able to express themselves. That is an accomplishment and also there is an element of a different kind of political engagement whereby you don’t see anyone using all kinds of means to prevent anyone from contesting. People can go and do a rally and march. In the past it was not easy for anybody to go and demonstrate in the centre of Harare.

“The transition was a major achievement for the country because in some other places it would have been bloody. That did not happen here and people respected Zimbabwe for that. I can see a sense of optimism and once again Zimbabwe can come to its glory days because this was a very successful country before things went bad.”

The ACBF executive said the African Continental Free Trade Area (AfCTA) agreement which African Heads of States signed this year in Kigali, Rwanda was vital to the development of the continent.
He said countries should now move with speed to ratify the agreement.

“This is an initiative that will remove all kinds of duties and barriers that prevent trade from happening between and among countries,” Prof Nnadozie said.

“The understanding is that if you have a larger continental free trade area where people can trade their goods and services instead of selling to 12 million people in Zimbabwe you can sell it to 1,2 billion in the continent.
“For any business that’s significant, it increases access to market.

“One of the major problems that have been preventing African countries from achieving their potential is the fragmentation created by colonial authorities. We have small markets not large enough to attract big investments, but with AfCFTA this will be a thing of the past.”

About 49 out 55 countries have signed the agreement while only six have ratified it.
“Now we are beginning to engage countries to assert their readiness to implement the ACFTA,” Prof Nnadozie said.
“Some countries have already indicated interest that they want us to do this, working together with African Union and Afreximbank.

He said anyone who would win today’s election should prioritise tackling youth unemployment.
“It is a challenge facing many other countries not just Zimbabwe,” he said.
“That administration should mainstream youth employment within every aspect of government and policies that they will be putting.

“Every project, programme being passed should demonstrate how jobs will be created. Secondly, since this is a major issue it will require both medium and long term solutions.

“You cannot say to create jobs, the fundamental way of doing that is to have a vibrant private sector that is expanding and investing and creating jobs, some short time measures have to take place.”