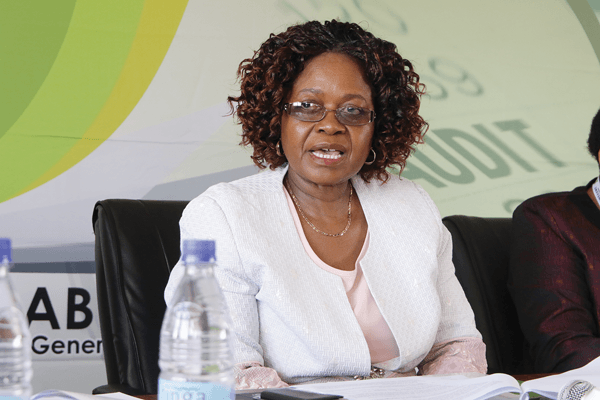 THE Auditor-General (AG) Mildred Chiri has decried continued failure to account for public funds by ministries and government departments, which resulted in more than $1,3 billion expenditure not being properly accounted for in 2020 to prove that the recorded transactions really occurred.

In her 2020 report on Appropriation Accounts, Finance and Revenue Statements and Fund Accounts which were recently tabled in Parliament, Chiri exposed gross irregularities whereby several payments amounting to millions of dollars (in foreign currency and Zimdollar) were done on behalf of ministries without supporting documents, which resulted in millions of dollars not being accounted for.

Chiri said several government ministries failed to provide enough documentation for purchased assets, making it difficult to verify the accuracy of the expenditure they reported.

“Expenditure amounting to $1 309 482 199 was not supported by documents such as acquittals, invoices, receipts, delivery and goods received notes as proof that the recorded transactions really occurred.  This is contrary to the provisions of section 59(15) of the Public Finance Management (Treasury Instructions) 2019, which states that payments should be adequately supported,” the report read.

The AG also revealed that dual payments amounting to $9 384 085 were made to suppliers in 2020 resulting in unnecessary expenditure.

“The Finance ministry processed various payments to suppliers of goods and services on behalf of ministries without adequate supporting documentation. For example, direct payments amounting to US$22 024 406, R6 403 830 and Pula 8 359 434 were made by Treasury on behalf of the Lands, Agriculture, Fisheries, Water and Rural Resettlement ministry and Transport and Infrastructural Development ministry.

“In addition, direct payments amounting to $376 019 364 were made on behalf of the Home Affairs ministry without detailed documentary evidence of how the transactions were recorded and reported in the accounting records, which were also not availed for audit,” Chiri said.

“A number of ministries had expenditure variances between the figures reported in the Appropriation Account and those in the Public Financial Management System (PFMS), the computerised system used by the government to process payments.

“The reported expenditure should be in agreement with what is reflected in the system as all payments are supposed to be processed through the PFMS. Where there is a variance, reconciliation should be made to establish the cause.”

Chiri said in most instances, reconciliations were not done, making it difficult to validate the accuracy of expenditure by ministries and government departments, an issue which she also reported in 2019.

“The Public Service, Labour and Social Welfare ministry made unauthorised transfer of funds amounting to $3 602 710 from the child welfare and the older persons funds to support the ministry’s Appropriation Account activities without authorisation from Treasury.

“This was contrary to section 116(6) and (9) of the Public Finance Management Act (Treasury Instructions), 2019 which prohibits utilisation of fund monies to meet Appropriation Account expenditure without Treasury approval.  As a result, the objectives of the funds on the development and promotion of welfare and protection of young persons were compromised.”

She said there were also dual payments made by ministries to suppliers.

“Refunds for the double payments were still to be received at the time of concluding my audit in 2021. Consequently, the value of money is lost due to inflation and lapse of time. Dual payments are indicative of weaknesses in internal controls.”

The AG also expressed concern over some ministries and commissions that fail to submit their revenue returns, a situation that resulted in limited scope for the audit.