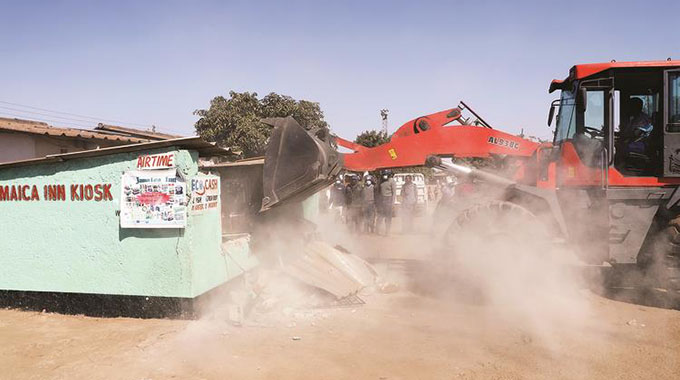 WHILE some of his peers were running along with scores of other children cheering excitedly at the monstrous yellow machine — the front-end loader which was demolishing illegal structures at Harare’s Glen View shopping centre last week, 11-year-old John Moyo* just stood next to the remains of his mother’s market stall.

He struggled to hold back his tears, dreading to be teased by his friends if he cried. His dejected mother beside him forced a smile, hoping her son would cheer up, but he did not.

She softly rubbed his back but overcome by emotions, the boy just cuddled more tightly onto her.

John was failing to understand why his family’s business of selling plastic wares had to be destroyed with such brute force.

“My mother will not be able to buy me the new clothes she had promised to buy when she got profit from the market,” he told The Standard.

“Maybe if our business was big like one of those supermarkets, it would not have been destroyed.

“I am worried that my mother may not have money to take care of us if she is no longer running a business.”

John was not the only youngster, who was in despair.

Many children in the Glen View high-density suburb followed their parents to witness their market stalls being demolished.

Some, too young to understand the threat posed to their families’ income earnings, seemed not to care.

But one thing common for all of them was that their source of livelihood had been destroyed.

The government last month embarked on an exercise to demolish illegal structures in the high-density suburbs including Chitungwiza and Harare’s Mbare, which left hundreds of informal traders without a source of income and other citizens homeless.

John’s mother Mavis Moyo* said she had to quickly improvise to find other means for survival to ensure that her son, a Grade  Five pupil at a local primary school,  together with his two younger siblings at home, did not starve.

“I have to think of another plan to earn some money, which is not easy though especially in the midst of this Covid-19 pandemic.

“There is also a rumour that government plans to impose yet another lockdown,” Moyo said (a day before the current lockdown was declared).

“I don’t even want to think about it, though I cannot avoid the responsibility of taking care of my children.”

Another informal trader, Tsitsi Chinyika, a mother of one, said without savings, it would be difficult to take care of her child.

“We survive from hand to mouth through informal trading; so any form of disruption impacts badly our way of life,” Chinyika said.

“At times we would not even have financial savings for the following day.

“Now that the workplace has been destroyed, I can only describe the situation I am in right now in short as the beginning of a difficult life.”

Recent studies by Unicef revealed that children suffer more during disasters and socio-economic conflicts and other instabilities within countries.

“During outbreaks of violence and conflict, children’s well-being is most at risk, and all aspects of developmental processes  which are physical, mental and emotional,  are strongly impacted,” Unicef said in its 2016 report on Conflict Sensitivity and  Peacebuilding.

“In such emergency settings where violent conflict is at its peak, finding peacebuilding opportunities potentially brings added value particularly in relation to the psychosocial health and well-being of children, young people and their caretakers.”

Local child rights activists told The Standard that benefits of clean cities were outweighed by the risks posed by the demolitions to the welfare of children.

They said by destroying homes or sources of livelihoods, government had violated the rights of children enshrined in the constitution under Sections 19.

According to the provisions of Section 19 of the constitution, the state must adopt policies and measures that ensure that in matters relating to children, the best interests of the children concerned are paramount.

The state must also adopt reasonable policies and measures, within the limits of the resources available to it, to ensure that children enjoy family or parental care.

The United Nations Convention on the Rights of the Child also states that children’s rights cannot be subject to compromise and therefore apply at all times, during peacetime and in conflict.

Zimbabwe Human Rights NGO Forum executive director Musa Kika said the demolitions had caused more harm to children than any other group in society because they depended on their parents and guardians for their day-to-day care.

Kika said in situations where caregivers were helpless, children became more vulnerable, hence demolishing people’s homes  and businesses added more  burden to the government   on taking care of  the vulnerable children  under the social welfare programme.

“It is cruel and inhumane to demolish houses or market stands without arrangements for alternative accommodation or workplaces,” Kika said.

“The demolitions went ahead after a court order was secured.

“These processes of court orders and alternative accommodation are meant to ensure that people, including children, are not left homeless.

“So insistence on due process is itself a way of protecting the children.

“But now that demolitions have occurred, the Department of Social Welfare, as the duty bearer in child protection, now bears responsibility to ensure that such children are in safety and are well-provided for.

“Regrettably the department is not well-resourced to meet this demand. This is why such demolitions must never occur in the first place.”

The Zimbabwe Humanitarian Situation Report of February to March 2021 by Unicef said there was an increased number of children, who had been affected by the Covid-19  pandemic and in need of food aid.

“This year approximately 384 254 children under the age of five are projected to suffer from acute malnutrition, with pockets of increased severe cases of malnutrition particularly in urban locations such as Epworth,” Unicef said.

Kika said the projections by Unicef were likely to be higher by year end because destroying homes and market stalls limited thousands of caregivers’ capacities to provide shelter, food and other basic needs to the children.

Fathers Against Abuse director Alois Nyamazana, said demolishing people’s livelihoods was a form of abuse to the children in contravention of constitutional dictates.

“Regardless of whoever was behind the demolitions, government should have stopped them, to protect the children, in accordance with the constitution, the supreme law of the land,” Nyamazana said.

“The government should have put the best interest of the children before the desire to clean the city.

“It was important to consider the effects that the demolitions would have on children first before carrying out the exercise.

“If children feel that their parents are being attacked or that their social and economic order has been disturbed, they get depressed.”

In Palestine, where hundreds of East Jerusalem households were left homeless when Israel destroyed their homes, 80% of the children say they felt abandoned after the demolitions, according to a survey conducted by a humanitarian organisation, Save the Children.

“They regard their parents as heroes and when their heroes are down they are  greatly affected psychologically.

“Government should provide humanitarian support for the affected children.

“Also, they need counselling after that traumatic event.”

*Not  their real names