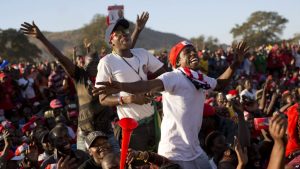 A new dawn, or more of the same? Zimbabweans can’t decide as epic vote approaches

HARARE, ZIMBABWE — The 55 political parties and 22 presidential candidates in Zimbabwe’s upcoming election are all peddling some version of the same thing: Change. Jobs. A better economy. It’s more or less a new dawn for a nation that has, for nearly four decades, been ruled by one man — Robert Mugabe.

The nation faces a historic election Monday, the first in 38 years without Mugabe on the ballot. But voters and observers are cautious in their optimism, amid concerns over whether it will be a free and fair poll — and whether the victor will deliver on promises to bring change.

In this nation of more than 5 million voters, though, not everyone is convinced that change will come.

Twenty-seven-year-old Widnence Dick already has seen the dawn. On this morning, as on many others, she sat on the frigid sidewalk, wrapped in a flimsy coat, waiting from 3 a.m. in front of a downtown Harare bank for the one thing that every Zimbabwean, it seems, can’t get enough of: hard cash.

Mugabe is largely blamed for policies and poor management that sent the economy spiraling downward.

She says she’s fed up, and plans to vote on Monday for opposition leader Nelson Chamisa.

“We want to get U.S. dollars without having to queue at the bank,” she said.

Mnangagwa, who took over in November after the resignation of longtime leader Mugabe, promised at his inauguration that he would take urgent action to fix the cash crisis that saw daylong lines at banks, in which people were restricted to as little as $10 U.S. dollars after their long wait.

That hasn’t happened yet.

But not everyone is pessimistic. In the capital, feelings about the poll, in which Mnangagwa is the front-runner, vary widely.

Thirty-three-year-old project manager Kudzai Marongwe says he’s thrilled to have a chance to vote in a poll that is freer than any in his lifetime. Election observers said Mugabe-era elections were marred by irregularities and allegations of intimidation and rigging.

“Very much excited,” he said. “The environment has been pretty peaceful, and the campaigning has been peaceful as well, and we’ve been going about our business as normally, without fear or anything, so yeah, it’s been great.”

Entrepreneur Pamela Ncube, who is 57, says she’s still loyal to the ruling ZANU-PF party, and has faith in them.

“It’s going to create many jobs for our youngsters, for our people,” she said.

Youth leader Hashton Gumira is part of an effort to draw in the youth vote.

“This election means a lot to us young, in this election we are going to vote for our jobs, over 80 percent of our population is jobless,” he said. “… previously we have been used by big politicians to perpetrate violence and do all bad things but my message is that this is our time as young people we have to be responsible.”

Observers are reserving their judgment, amid accusations of voter intimidation and problems with the voter roll. But rights groups say there is reason to be hopeful.

“Our partners on the ground have been saying that there is subtle voter intimidation, which is not as blatant as we have witnessed before in 2008,” said Amnesty International researcher Lloyd Kuveya.

This is, without doubt, a major test for a nation that has only been led by one man since independence. Whoever wins faces an uphill battle to fix the broken economy and restore credibility to government institutions battered by inefficiency and corruption.

And so, as Monday approaches, Zimbabwe holds its breath.

Sebastian Mfohu contributed to this report from Harare.