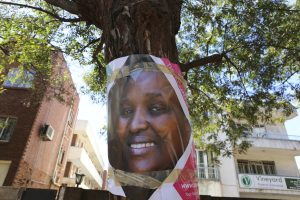 A new political openness has fostered political paths for women in Zimbabwe. This year, the country has four female presidential candidates, a first since independence in 1980. However, candidates still face misogyny, threats, and harassment.

Ahead of Monday’s historic election in the largely conservative country, the few female candidates have faced gendered insults and accusations of sleeping around. Gender-based prejudices are still rife in this southern African nation, where women traditionally have been cheerleaders for male politicians and the #MeToo movement has hardly registered.

But the female candidates are fighting back with wit, turning the abuse into political capital.

“Marriage, though often a beautiful thing, is not an achievement. It does not qualify one for public office,” Ms. Mahere said in one spirited exchange on Twitter.

“It will take a lot more than calling me … childless or husbandless to shut me up,” said the lawyer who is pursuing a parliamentary seat in Zimbabwe’s capital, Harare. She has declared: “I am married to my campaign.”

Zimbabwe is seeing a new political openness in these elections, the first since longtime leader Robert Mugabe stepped down in November under military pressure amid concerns that his wife, Grace, was positioning herself to take over. While this election has a record number of 23 presidential candidates, most are still men.

The abuses hurled at women ahead of the vote have brought public condemnation from ambassadors, opposition leader Nelson Chamisa, and foreign election observers. “This is not acceptable at all,” the first female president of Ireland, Mary Robinson, said earlier this month after unfounded allegations spread that the female head of Zimbabwe’s election commission was having an affair.

Violence, intimidation, and lack of resources are major factors keeping women from running for office despite making up more than 54 percent of the country’s registered voters, said Margaret Sangarwe-Mukahanana, chairwoman of the Zimbabwe Gender Commission, a quasi-government body.

Despite the new diversity of voices in this election, “there seems to be convergence when it comes to lampooning women,” Ms. Sangarwe-Mukahanana told reporters on Wednesday. “Women have been accused of being prostitutes and accused of indulging in extra-marital affairs. Men have not been treated in the same manner. Moral righteousness only applies to women leaders.”

That has held back female candidates for parliamentary seats. Just 15 percent of the more than 1,600 candidates are women, according to the Women in Politics Support Unit, a local non-governmental organization.

“Women’s rights are on paper; in reality it is business as usual,” the organization’s executive director, Sakhile Sifelani-Ngoma, told The Associated Press. Even with a quota system, women make up 35 percent of Zimbabwe’s parliament, and fewer women will have seats after the election, she said. Her organization’s research shows that 84 seats are being contested by men only.

In spite of the obstacles, Zimbabwe now has its first female presidential candidates since independence from white minority rule in 1980 – four of them.

“Optics matter. It is important that presidential elections are not seen as a preserve of men,” said Priscilla Misihairabwi-Mushonga, chief election agent for female candidate Thokozani Khupe. Like other candidates, Ms. Khupe has been called a prostitute and other names by opponents.

“That is how we are taking back our power. We can’t allow men to use our sexuality to undermine us. It should be ours to use,” Ms. Misihairabwi-Mushonga later told the AP.