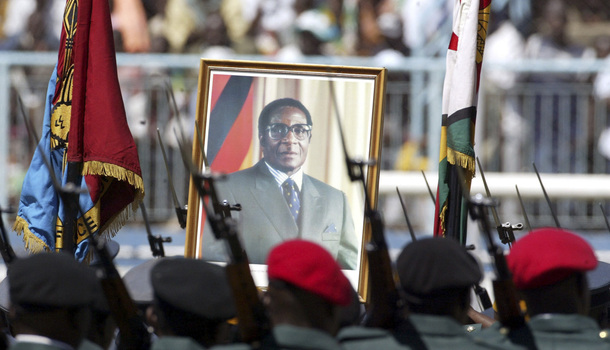 ZIMBABWE’S founding father, the late President Robert Mugabe, was
given a massive send-off, marked by a fly past, 21-gun salute, release of
95 doves and tributes from African leaders at the National Sports Stadium,
Harare, yesterday.

Mugabe, who died in Singapore last week, aged 95, in death united
Zimbabweans from all walks of life, including President Emmerson Mnangagwa
and MDC leader Nelson Chamisa, who thronged the 60 000-seater stadium to
pay their last respects.

He died on an overseas medical trip almost two years after former army
loyalists forced him out in November 2017, following a power struggle over
what was widely perceived as a bid to position his wife Grace as his
successor.

Mugabe’s casket, draped in the green, black, gold and red Zimbabwe flag,
was marched slowly into the stadium, accompanied by a military band and an
escort of officers. His wife Grace, in a black veil, and family followed
behind.

African leaders and officials from Cuba, Russia and China all praised
Mugabe as a pan-African hero for his past as a colonial-era guerrilla
leader.

“We honour and remember our African icon. He had many allies and
followers… Our motherland is in tears,” Mnangagwa said.

Kenyan President Uhuru Kenyatta said: “Mugabe will be remembered as a true
pan African. He was a visionary leader, he wanted a united Africa. I call
upon African leaders to be united. African leaders must continue defending
African sovereign rights as a tribute to the late former president. He
defended African dignity.”

“Former president was a defender of African sovereignty. Africa is
mourning a great fighter. He is an icon of African liberation. The people
of Zimbabwe have lost a strong African leader. He empowered his people,”
he said.

Earlier, before the selected heads of state delivered their condolence
messages, Mugabe family spokesperson Walter Chidhakwa broke down as he
narrated the last days of his uncle, who was removed from power by the
military in a November 2017 coup that went on to install Emmerson
Mnangagwa as President.

“I spent lots of time with him towards the end of his life. He was a sad
man, a sad, sad, sad man. He recalled quietly the journey he had walked, a
profound journey, a hard and excruciating journey, and thus must he
leave,” Chidakwa said with tears welling in his eyes.

“So we miss him already, we want to be with him. The mind knows that at
95, at some point we must go, but the heart wanted him to stay a little
longer.”

Chidakwa, a former minister of Mines and Mining Development, told the
sizeable crowd that his uncle was a unifier who did not view the country
through tribal lens.

“The language of unity and togetherness was his language. He detested
tribalism; he wanted a nation that was united. He also recalled that the
struggle had been won because of the uniting of the masses of Zimbabweans.

“I hope, I have confidence, that as we remember him, as we go through his
memory, we recall his voice calling us to unity, bringing us together as a
nation. Our father was about consistency, being consistent and carrying it
to its final logical conclusion,” said Chidakwa.

Mugabe’s final burial at a national monument will only happen after a new
mausoleum is built in about 30 days. That decision was taken after his
family ended a dispute with Mnangagwa, a former ally who turned against
his rule in 2017.

Mugabe’s body was returned from Singapore on Wednesday to a country he
helped found as an anti-colonial fighter who helped end white-minority
rule.

Later, Mugabe turned to repression and fear to crush dissidents and govern
for nearly four decades during which he became an international pariah for
his takeover of white-owned farms.

“You can’t talk about Zimbabwe without Bob. Zimbabwe is Bob. It took a man
like Bob, his bravery, to get independence,” said Norman Gombera, 57, a
school principal in Harare. “Bob did his best under the circumstances.
There is no country without a problem.”

A young Mugabe was once jailed in the former British colony Rhodesia for
his nationalist ideas. But he swept to power in the 1980 elections after a
guerrilla war and sanctions forced the Rhodesian government to the
negotiating table.

In office, he initially won international praise for promoting racial
reconciliation and for extending improved education and health services to
the black majority.

But he soon turned to the repression and fear that would mark his regime
for decades.

Though still lauded as an African icon, at home many Zimbabweans will
remember Mugabe more for the increasingly tyrannical rule and economic
mismanagement that forced millions to flee the country during decades of
crisis.