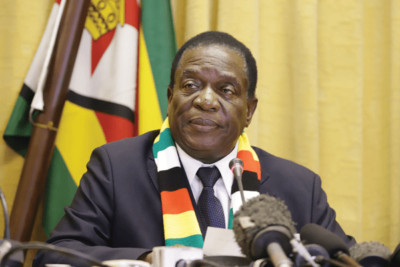 PRESIDENT Emmerson Mnangagwa yesterday branded the MDC Alliance a terrorist organisation that was “pro-violence” and “anti-people”.

Mnangagwa’s remarks made at the launch of empowerment programmes for war veterans in Harare invited an immediate response from the MDC Alliance, which accused the Zanu PF leader of preaching hatred.

“Let us all remain astute and vigilant, aware of the asymmetrical tactics of the opposition, in particular the MDC Alliance whose character resembles that of a terrorist organisation,” Mnangagwa said.

“The MDC Alliance has nothing democratic about it. It is anti-constitution, anti-development and anti-people, but pro-violence and destruction.

“Let us remain vigilant and be wary of the MDC-A, which is anti-people and anti-democratic.”

Clifford Hlatywayo, MDC Alliance deputy spokesperson, said to the contrary it was Mnangagwa who  had caused untold suffering and terror to the people of Zimbabwe.

“He is the one terrorising people. Zimbabwe is suffering under his watch and command.

“There is terror all over and chaos in schools, hospitals and across the board,” Hlatywayo said.

“He is preaching hatred to cover for his terror acts. What kind of leader does that?

“He is actually abusing the war veterans who are suffering but now want to use them for his campaign.

“It is all about power retention and wanting to abuse the freedom fighters.”

Mnangagwa has been accused of descending heavily on opposing voices since he came into office, including shooting of civilians by the military in August 2018 and January 2019.

Under his watch, dozens of MDC Alliance activists have been arrested while human rights abuses continue unabated.