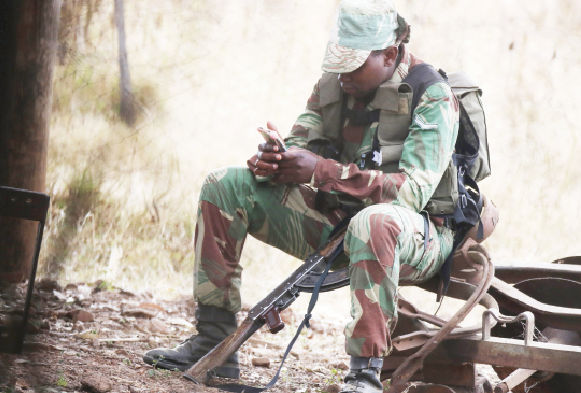 ZIMBABWE’S military, enforcing a government order, has forcibly evicted President Emmerson Mnangagwa’s elderly cleric neighbour — at gunpoint — from a well-developed and equipped 250-hectare farm on the outskirts of Kwekwe in the Midlands region, the Zimbabwe Independent has established.

The platoon commander, a lieutenant, ordered his troops to occupy strategic positions around the property, before advancing and disrupting farm operations during the military-style takeover. The soldiers then gave Moyo, who leads the Christ Apostolic Church Worldwide Revelation, four days to vacate the property, although Shiri had instructed that he should leave the farm within 90 days.

It was not immediately clear why Moyo was evicted, but the Independent has established Shiri allocated the property to the Zimbabwe National Army’s Headquarters 5 Brigade on June 20. Shiri was in charge of 5 Brigade during the Gukurahundi massacres in which 20 000 civilians in the Midlands and Matabeleland regions, including women and children, were killed in the 1980s. The army unit is based in Kwekwe.

Checks showed that the military cited security reasons for their brutal action.

An Independent news crew which visited the farm on Monday counted more than 30 soldiers on the property. The soldiers were wielding assault rifles and had erected make-shift structures around the farm.

Documents obtained from the Lands ministry during an investigation into the issue show Moyo was allocated the farm on November 25, 2005 through an offer letter signed by the then National Security minister Didymus Mutasa, who was also in charge of Lands, Land Reform and Resettlement.

After the coup which brought in Mnangagwa, Shiri wrote to Moyo on January 9 notifying him that his ministry intended to seize the farm. The minister indicated Moyo would be allocated another one, but that was not done.

Shiri told Moyo “to make any presentations” he might have on the matter to him in writing within seven days. He also wrote another letter on June 5, demanding that the cleric must vacate the property within 90 days. “Following the notice to withdraw your offer letter and the representations which you made to that effect, please be advised that the Minister of Lands, Agriculture and Rural Resettlement is withdrawing the offer letter of land made to you in respect of subdivision 1 measuring 250.00 (hectares) of Delvillewood (Victory farm),” Shiri wrote.

“You are required to cease all or any operations that you may have been undertaking thereof and vacate the piece of land within 90 days.”

After seizing the farm from Moyo, Shiri then allocated the property to the army, documents say. “I am pleased to offer to the Headquarters of 5 Brigade the following farm (Delvillewood Sub division 1), which was compulsorily acquired in Kwekwe District, Midlands Province for use by the Headquarters 5 Brigade,” he wrote.

“Please note that the land in question is for institutional use by Headquarters 5 Brigade, Kwekwe, Midlands Province and shall remain state land on which terms and conditions for state land apply.”

Asked for a comment, Shiri said he did not remember grabbing Moyo’s farm. “It would make sense if you speak to the army. But the army is responsible for many projects in agriculture including livestock and banana plantations,” Shiri said. “I do not remember signing that letter (withdrawal letter). Are you able to prove the authenticity of my signature?”

Zimbabwe Defence Forces spokesperson Colonel Overson Mugwisi said he would seek clarification from officers responsible for managing army projects.
“Send an email, and I will direct the concerns to the people responsible for projects,” he said.

Prior to the seizure of his farm, the cleric, whose commercial farming operations also supported his philanthropic work, wrote to the minister, arguing he should keep the property because he was an “exemplary black A2 farmer.”

Moyo said he had consistently delivered key cash crops to various Grain Marketing Board (GMB) depots in the Midlands and Mashonaland West since being allocated the farm. “I have worked extremely hard (despite my old, advanced age) and have been farming each and every year since 2005,” Moyo wrote on January 15.

“I have been delivering maize, wheat and soyabeans every year to the GMB while developing the farm. I have been an exemplary black A2 farmer often used as a success story in the entire Midlands region . . . Many have visited my farm from as far as Harare just to witness for themselves the massive crop production, animal husbandry and maximum land utilisation on Victory Farm.

“When I started back in 2005, I was using traditional farming implements like hoes. After having worked so hard, investing in Victory Farm, I was able to purchase modern, state-of-the-art farming equipment.”

Moyo said to show he was a serious and successful farmer, he had constructed silos, dams, canals, sheds, houses, kraals, wells and fowl runs on the farm.

When the Independent crew visited the farm, it found armed soldiers all over and in charge, chatting about football.

Some of the troops were camouflaged in the dense thickets surrounding the farm. About 10 soldiers, whose AK-47 assault rifles were resting on tree trunks, were sitting outside the farmhouse eating from plastic plates.

Farmworkers were loading farm equipment into a truck before taking it to a ramshackle industrial property owned by Moyo, about five kilometres from Kwekwe central business district. A sizeable crop of maize, which was due to be delivered to the GMB, also lay scattered among the motley implements at the industrial stand. Some farmworkers were busy harvesting a crop of maize. Sources who witnessed the troops seizing the farm say when they first arrived, the soldiers were in a belligerent mood and bulldozed their way in, although they later became friendly to farmworkers.

A week before the takeover, sources said, two millitary helicopters flying at low altitude had menacingly circled over the farmhouse before landing on Mnangagwa’s farm.
The Independent crew contacted Moyo who, however, refused to comment.

“I have nothing to say about this matter because those in authority have spoken. It is for you to make sense of what you saw at my farm,” Moyo said.
Workers at the farm said although Moyo was a good and progressive farmer, he was vulnerable and unable to defend himself. “There is nothing we can do,” one farmworker said.