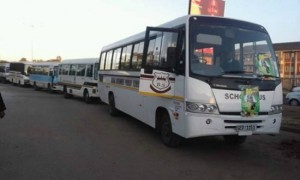 FILE: Forced … Some of the school buses used during the march

The Amalgamated Rural Teachers’ Union of Zimbabwe, ARTUZ and Zimbabwe Human Rights NGO Forum will today 13 July 2018 host a safe schools policy dialogue forum aimed at coming up with guidelines of ensuring safety of teachers and learners in schools. The Indaba will be held in Harare starting at 0800hrs.

The discussion forum is a follow up to a recommendation by Zimbabwe Human rights Commission in 2017. The Commission recommended the Ministry of Primary and Secondary education to come up with guidelines of protecting teachers, learners and school property from private political players. The Ministry however seems reluctant to come up with the guidelines.

Teacher representatives and Civic society partners will participate in the Fridayindaba. The guidelines that will be produced on Friday will be shared with the Ministry for adoption.

ARTUZ recently secured a High Court order barring political parties from abusing teachers, learners and school property in pursuit of private political interests. The safe schools guidelines will consolidate the Court order by ensuring that there is a clear framework of evaluating compliance.

Zimbabwe has already experience of the effects of political violence at schools. Research carried out by RAU and MPOI revealed the following in the aftermath of the 2008 elections:
•          56% of teachers stated that the attacks they witnessed were because teachers were suspected to be members or sympathized with the opposition parties;

•          14% of teachers stated that the attacks they witnessed were because teachers are deemed influential in society and accused of influencing people to vote for the opposition political parties;

The most frequent violations directly experienced were as follows:

There is therefore strong evidence that political violence has taken place at schools, affecting both pupils and teachers, and, of course, the wider community around the schools.

The ARTUZ Research Department has so far documented 3780 cases of teachers who were victims of political violence from 2000 to date. Some of these teachers lost lives, some limbs and others had to flee their workplace. This has adversely affected the quality of education delivered in rural schools as teachers shun the schools citing political violence.

The Global Coalition to Protect Education from Attack (GCPEA) established in 2010, and is now governed by a steering committee composed of nine organisations: CARA (Council for At-Risk Academics), Human Rights Watch (HRW), Institute of International Education/ IIE Scholar Rescue Fund, Protect Education in Insecurity and Conflict (PEIC), Save the Children, UNICEF, UNESCO, and UNHCR and the Oslo Safe Schools Guidelines of 2015 are  great global initiatives designed at ensuring that learning is not disrupted during armed conflict. Zimbabwe can take a leaf from such initiatives and develop domestic guidelines to guarantee smooth learning during times of contestation and conflict.

Political party rallies have been consistently marred with violence, the White City bombing and the Bindura ZANU PF chaos being recent case studies. It is therefore imperative that learners are not exposed to the potential hazards associated with the volatile political gatherings.