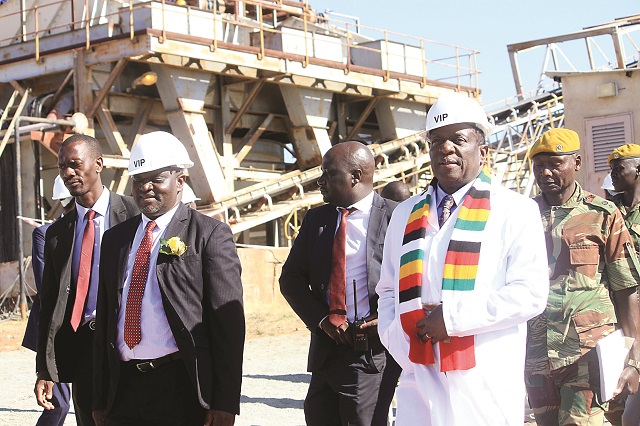 President Emmerson Mnangagwa yesterday officially reopened Eureka Mine, Guruve’s biggest gold mine, disclosing that an investor, Dallaglio Investment, had poured in US$60 million to capitalise the mine which will create employment in Guruve.

Eureka Mine, which employed over 400 workers at its peak, producing about 1,5 tonnes of gold per annum, had been idle for the past 20 years.

Mnangagwa conducted a ground-breaking ceremony in the run-up to the 2018 general elections.

Yesterday, he said his government’s thrust was to partner investors and reopen all mines that are lying idle as it pins hopes on natural resources to rebuild the economy.

“My administration stands ready to welcome investments in the mining sector, to explore opportunities availed by our rich gold, platinum, diamond, coal, hydrocarbons, chrome and lithium deposits among other minerals,” he said.

Addressing a rally after the event, Mnangagwa assured villagers that the resuscitated mine would not only provide employment for them, but build infrastructure.

The rally, Mnangagwa said, was organised by Zanu PF provincial chairman, Kazembe Kazembe behind his back.

“Your chairman has been so mischievous, I came to commission Eureka Mine. Little did I know that he had organised a rally behind my back, but nonetheless, his mischief is good because, at least, you have seen me and I also saw you,” Mnangagwa said.

He accused opposition parties of inviting sanctions which he said had caused untold suffering on villagers.

“We should all wish for a good country with good leaders, not those that beg for sanctions. We have gone more than 20 years with targeted sanctions called for by the opposition. We know they are among us in the country, but we should just ignore them and let life continue,” Mnangagwa said.

“It is also unfortunate that in Sadc, we are the only country that was not given funds to cater for COVID-19 pandemic vaccines, but thank God, to date, we have more than five million people who were vaccinated and less COVID-19 patients.”

Zimbabwe has 2,5 million fully vaccinated people against a target of 10 million required to reach herd immunity.

At least 3,2 million have received the first shot.