Mnangagwa’s ‘A Life of Sacrifice

This authorised biography tells the life history of Zimbabwean President Emmerson Mnangagwa, from childhood to presidency. The biography is 153 pages long. It consists of a foreword, an editor’s note by Rachel Jambaya, 30 brief chapters, and a conclusion.

Source: Mnangagwa’s ‘A Life of Sacrifice – The Zimbabwean 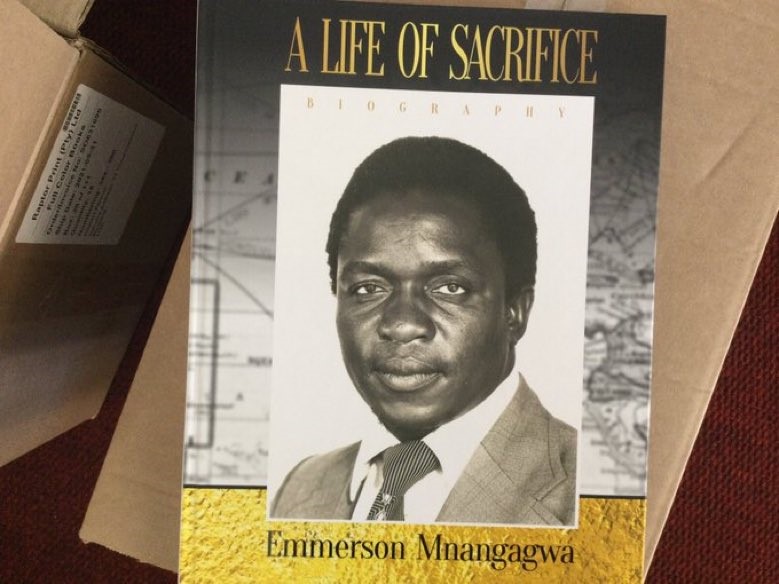 The biographer, Eddie Graham Cross, is an economist, a regular commentator on public affairs and former Secretary for Economic Affairs in the Movement for Democratic Change (MDC), a party he left in 2018 after 19 years of serving in a range of executive positions at national level. Cross drew on personal interviews with Mnangagwa in order to complete the biography.

Cross has written a controversial biography of Mnangagwa.

The biography depicts vice president Constantino Chiwenga, the former general who helped bring Mnangagwa to power in a military coup in 2017, in an unfavourable light. It is also replete with conspicuous historical distortions and silences. Nonetheless, the biography does have some strengths, such as its presentation of the true version of certain important events in Mnangagwa’s life.

Cross’s corrections bring to light Mnangagwa’s mythomania. Mnangagwa penned the biography’s foreword, graced its official presentation on 5 August 2021, delightedly signed copies of the book at the launch and he did not publicly rebut any of the biography’s contents. Consequently, it is fair to conclude that Mnangagwa wholly endorses his biographer’s work.

‘Military figures’
Cross writes that following Mnangagwa’s inauguration as president of Zimbabwe on 24 November 2017, “he set about selecting a new cabinet and senior staff in the president’s office. This was complicated by the demands being made by the senior military officers who had carried out what became known as the military assisted transition (military coup). Chief among these was the commander of the armed forces, General Chiwenga”.

Elsewhere in the biography, Cross states Mnangagwa “replaced General Chiwenga with General Philip Sibanda” as commander of the Zimbabwe Defence Forces and he avers that Sibanda is “possibly the best soldier in southern Africa and a man that was deeply respected in the army. Mnangagwa’s actions drew little attention but what the president was doing was closing the door on any possibility of the military assisted transition (military coup) being repeated. He needed to know that the security services were led by men in whom he had confidence as professionals”.

Additionally, Cross maintains that when violence and looting occurred in January 2019, the acting President Chiwenga “demanded that a state of emergency be declared and martial law be introduced. This would have effectively meant that the armed forces took over the administration of the state”. However, Cross continues, “General Sibanda refused. He said his orders from the President were clear. What had happened was that the President had stamped his personal authority on the state. He would not tolerate any challenge”.

‘Hardliners’
Cross makes reference to “hardliners” (Chiwenga ostensibly) who, before the July 2018 election, “argued that reforms to the electoral system and any relaxation of controls over the media and civil society would have serious impact on the ability of ZANU PF to win the election.

Moreover, Cross contends that a grenade thrown at Mnangagwa on 23 June 2018 during a ZANU PF rally at White City stadium in Bulawayo “was of Chinese origin and in use by the Zimbabwe National Army”.

From the foregoing, Cross appears to be casting aspersions on Chiwenga as a political operator. His biography suggests that Mnangagwa and Chiwenga are ill at ease with each other. Cross typecasts Chiwenga as obstructing political and economic reforms and as in favour of repressive and militarised state responses such as martial law. He intimates that Sibanda is a more “professional” soldier than Chiwenga who Mnangagwa trusts will not carry out a coup – a contentious assertion, given that Sibanda participated in the 2017 coup.

Corrections
Let me now turn to some of the ways in which the biography corrects falsifications of significant episodes in Mnangagwa’s life story. One example will suffice. Mnangagwa, in The Sunday Mail of 22 February 2015, narrated that he was spared the death penalty in 1965 for using explosives to cause damage to a railway engine, as part of early liberation struggle sabotage campaigns. According to Mnangagwa in 2015: “the age of majority then was 21. I was below 21, so I escaped the noose. My colleagues were, however, hanged”.

Cross corrects this account by reproducing the High Court of Rhodesia’s 1965 sentence in the biography.

The High Court’s sentence reads: the court accepts “the fact that you are 18 years and seven months old. That being so, in terms of this section of the Law and Order (Maintenance) Act, the court has a discretion as to whether to impose upon you the death penalty or to send you to prison for a period up to a maximum of 20 years. Generally speaking, it seems to me that where the Court has a discretion in dealing with an offender under the age of 19, the death penalty is appropriate for the worst type of case where, for example, petrol bombs have been cold-bloodedly and deliberately thrown into residential buildings occupied by persons causing them misery and suffering. This is not such a case, although it is a serious crime according to law. I do not therefore propose to sentence you to death in this case”.

Thus, contrary to Mnangagwa’s longstanding claim he was spared death because he was underage, Mnangagwa was in fact not sentenced to death in 1965 because his crime was considered by the judge as not grave enough to warrant hanging. Cross deserves commendation for setting the historical record straight in this instance.

Cross-checking
Although Cross debunks some of Mnangagwa’s mythomania, he too is a mythomaniac. For example, Cross writes that Mnangagwa “was designated as one of the leaders” of the crocodile gang in the 1960s and insinuates that Mnangagwa was involved in the killing of Pieter Oberholzer in Chimanimani in 1964. Mnangagwa was, of course, not a member of the crocodile gang and he was not implicated in Oberholzer’s killings, as scholarly works by Baxter Tavuyanago and Terence Ranger show.

Cross’s expertise as an economist encumbered his ability to generate a credible biography of Mnangagwa. Trained economists should probably stick to writing about economics, not liberation, military and political histories, which are beyond their knowledge.
For instance, Cross refers to the Zimbabwe People’s Revolutionary Army (ZIPRA) as the ‘Zimbabwe Independent People’s Revolutionary Army’.

In 1978, ZIPRA shot down two Rhodesian Viscount planes but Cross writes that the downing occurred in 1962 and, erroneously, uses it as an example of how the “guerrilla war was gaining momentum”.

Furthermore, according to Cross, in 1975 Herbert Chitepo was “assassinated in what is suspected as inter party violence and conflict”. This is a bizarre contention since the competing views on Chitepo’s assassination are that it was the result of an intra ZANU conflict or that the Rhodesian security forces carried out the hit. Is Cross suggesting, through the statement ‘inter party conflict’, that ZAPU assassinated Chitepo?

What is the evidence for this?

Zimbabwe entered the second Democratic Republic of Congo (DRC) war to assist Laurent Kabila to fend off a rebel insurgency in 1998, but Cross, incorrectly, writes that Zimbabwe intervened “to support the campaign by Laurent Desire Kabila to take power from the long standing dictator Mobutu Sese Seko”.

What is more, the Zimbabwe National Army (ZNA) was created through the merger of three rival armies – the Rhodesian army, ZANLA and ZIPRA but Cross, speciously, writes that five armies merged to form the ZNA.

Silences
Then there are the biography’s historical silences.

Despite crediting Mnangagwa as having taken charge of operations during the late 1990s DRC war, Cross is silent about United Nations and non-governmental organisation reports about corruption during Zimbabwe’s involvement in the second DRC war.

Cross also seeks to downplay the role of Mnangagwa and the CIO in the 1980s Gukurahundi. Cross would have us believe that Mugabe’s instructions on Gukurahundi only went directly to “the 5th Brigade and to the Ministry Of Home Affairs and the Police on the ground” and excluded CIO, which fell under Mnangagwa’s Security Ministry.
Yet, as the CCJPZ report Breaking The Silence: Report On The Disturbances in Matabeleland and Midlands discloses, CIO was in fact central to Gukurahundi operations and it functioned from within Mugabe’s office. Cross is also silent about Mnangagwa’s role in the strong March to June 2008 political violence.

The scholar Kristen Harkness points out that “British martial race doctrine, developed first in colonial India, stipulated that some ethnic groups were naturally more suited to combat and military discipline than others. Once groups were classified as martial they were preferentially recruited into the British colonial forces”.

It is precisely this colonial martial race doctrine that underlies Cross’s unevidenced contention that Mnangagwa was recruited in ZAPU in 1962 partly because of “his potential from a military point of view given his Karanga tribal background and physique” – the implication being that Karangas are “naturally more suited to combat”.

Indeed, Cross largely understands the politics and history of Africans through colonial tropes like “tribes” and “tribalism”. Never mind that the notion of “tribe” is, today, bereft of analytical purchase because it lacks a sense of social scale and complexity and it presupposes savagery, primitiveness, irrational violence and ancient hatreds in Africans.

A final important silence concerns Mnangagwa’s personal dimension. Bar his early family history, we get no real sense of who Mnangagwa is today, his actual character away from political performance and the composition of his immediate family, making for a rather impersonal biography.

The wives of politicians matter. Who is Auxillia Mnangagwa and how has she impacted Mnangagwa’s personal and political trajectories? What are the ideas, thinkers or books that have shaped Mnangagwa’s political outlooks?

Perhaps Cross will care to address these crucial questions and the aforementioned shortcomings in a second edition of his biography of Mnangagwa. – newZWire