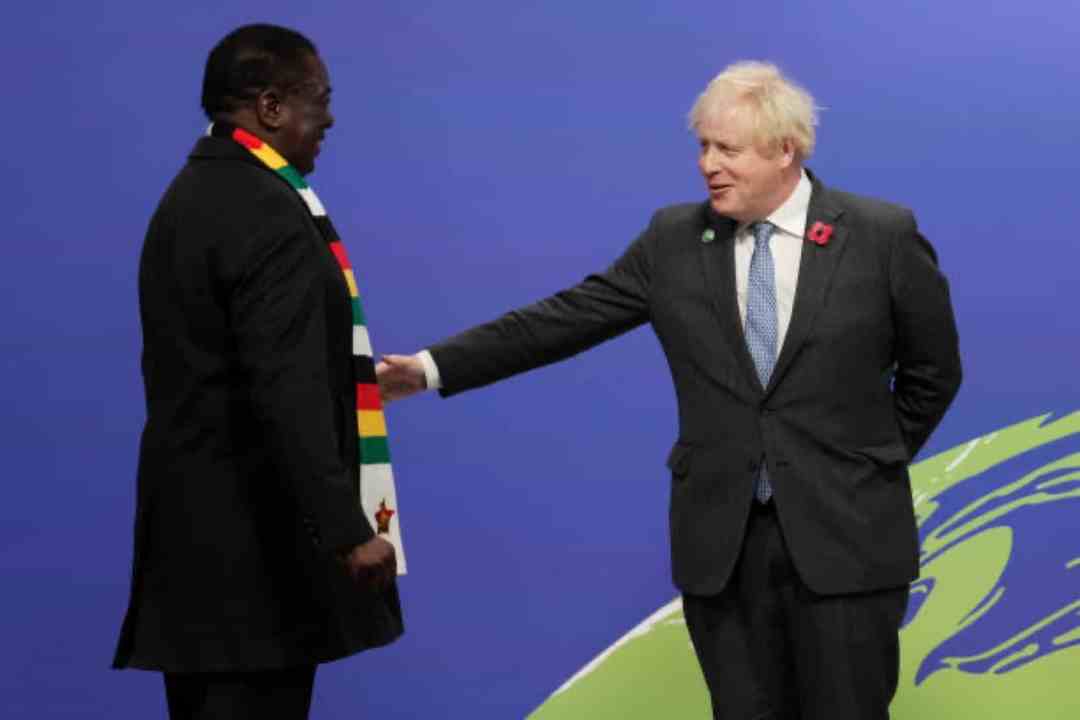 A PICTURE tells a thousand words, they say. Or it does not tell the whole story! The latter was the case when Zimbabwe’s President Emmerson Mnangagwa met with British Prime Minister Boris Johnson at the ongoing COP26 in Glasgow, Scotland in the United Kingdom.

So on Monday, Mnangagwa did meet Johnson, who as the host welcomed him to the conference, alongside the United Nations secretary-general Antonio Guterres. The entire episode last about 35 seconds, including the time for the photoshoot.

Within moments, the President’s Twitter account had splashed the pictures and enthused: “As the first President of Zimbabwe to visit the United Kingdom in a quarter of a century, it is clear that re-engagement is working!”

He tried to tie the findings of the UN special rapporteur, Alena Douhan, who visited Zimbabwe from October 17 to 28, 2021 to assess the impact of sanctions on the enjoyment of human rights by ordinary Zimbabweans to his invitation.

Varakashi, as his disruption squad on social media is known, dived in.

“President Mnangagwa’s re-engagement and engagement efforts to strengthen economic, political and social relations with the global community (are) ongoing and already bearing fruits,” one told us.

Another gushed: “President Mnangagwa’s re-engagement and engagement policy intends to strengthen economic, political and social relations with the global community! Zimbabwe will never be the same again!”

And yet another went: “President Emmerson Dambudzo Mnangagwa is a genuine leader not a searcher for consensus but a moulder of consensus, working hard in silence and let success make the noise … And when best leader’s work done, white heavy check mark. The people say: we did it ourselves.”

The level of desperation for attention and any sort of contact with international leaders is shocking to say the least.

It was a UN conference where every leader is invited to. The invitation would have applied to the late Robert Mugabe too. It had nothing to do with his re-engagement efforts. But hey, why waste a good opportunity to rub it to the faces of the pesky opposition that claims closer relationships with the West?

The European Union president Charles Michel also posted a picture of his meeting with Mnangagwa and added: “The EU stands ready to re-engage and support in implementing necessary reforms and tackling global challenges.”

The key message being: Implementing necessary reforms. The regime may not want to hear about it but the demand for reforms is not going to go away.

What Mnangagwa and his ilk seem to miss is that his successes domestically and internationally translate to the success of all Zimbabweans. All well-meaning Zimbabweans want him to succeed, but also want him to be fair, inclusive and be a leader of all the people, not just his supporters.

Pictures and videos with Western leaders at UN events will not get sanctions removed or end the isolation, but practical steps on the ground will.

Once he takes those practical steps, he would not have to address an empty venue because as a successful reformist, he would have something good to share with the world.