The Mutota ruins provided protection for the elderly, women and children

Mutota Monuments located at the heart of Chisora Village, Ward 6 in Mbire provided a fortress for women, children and was a resting haven for freedom fighters during the liberation struggle.

He said the Mutota Monuments played a huge part in the protection of women and children during combat.

The site is believed to hold supernatural powers and was not easily penetrated by the enemy.

Chief Nyatsimba Mutota, who exited Great Zimbabwe around the 15th Century, led his people to establish a new kingdom in this area where a smaller and less spectacular walled site was built using slabs of rocks.

To this day, the people of Chisora village are fighting hard to preserve this area which is of cultural value to them.

“The liberation struggle started in this area,” said Mr Gurupira. “All freedom fighters assembled here awaiting deployment to different areas. Those crossing into Mozambique using this front for their training also passed through this place.

“We kept Friday as a sacred day and freedom fighters were not allowed to go to battle or fire their rifles. Spirit mediums would be consulted for guidance and the freedom fighters’ weapons would be sanctified through traditional rituals.

“The ruins provided protection for the elderly, women and children. Food was also kept inside the shrine during the liberation struggle.”

Mr Gurupira said the other section was used by women to cook for the freedom fighters while the other compartment sheltered men.

“This is where strategies and meetings were held before fighters went outside the shrine for war,” he said, and added: “Mutota Monuments was a resting place for freedom fighters. Parents would mingle with freedom fighters knowing that the shrine would give them cover when fighting broke out.

“The Rhodesian forces were aware that this place is sacred and they never came. It is a spiritual place and the enemy would get lost or become mentally challenged.”

Another villager, Mr Chartwell Mumbamuchena said the National Museums and Monuments of Zimbabwe (NMMZ) had since declared the site a protected area, but illegal gold panners were ravaging the area in search of gold.

“During the reign of Chief Mutota, he stayed at the site with his family,” said Mr Mumbamuchena. “Only the parents ventured out in search of food and salt, they would pass through Tuwuyu Tusere on their way to Guruve.

“The fortress was built to protect them during their wars of bows and arrows.

“It was a resting place for travellers from Mozambique or Guruve.”

The community was fighting hard to preserve the area and teaching the younger generation the importance of the place.

He said they approached Mbire Rural District Council for assistance in maintaining the area.

“We are appealing for a fence so that there is one entrance into the site,” he said. “This way we will be able to guide people on the do’s and don’ts of this site and monitor.

“Traditional rituals like rain making ceremonies are done in this area. People are invading the place in search of hidden treasures. The place was once fenced, but it was vandalised.”

The community has kept the place in its natural vegetative state and they don’t allow cutting down of trees.

Mr Mumbamuchena led The Herald crew to one of the oldest baobab trees at the site. 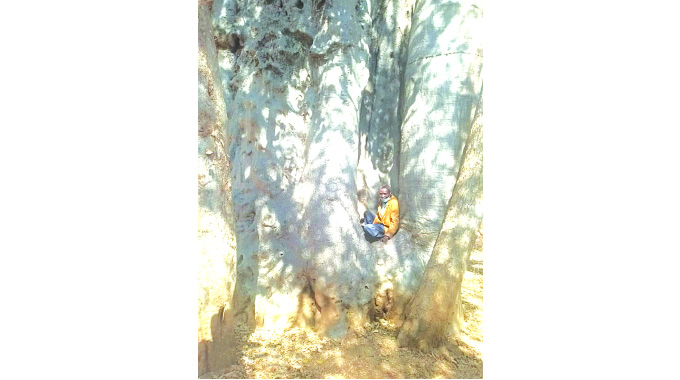 The tree has an entrance to an open space in its trunk which can accommodate a sizeable number of people.

The entrance, said Mr Mumbamuchena, was becoming smaller due to desecration of the area.

“It is forbidden for one to circle the tree or they risk getting lost,” he said. “Two white people who entered the site on their own were assisted after getting lost and one person lost his life.”

The community is not alone in preserving Mutota Monuments, Mr George Seremwe who runs Mavuradonha Wilderness said cultural heritage was a great attraction to tourism.

He said Mavuradonha Wilderness was on the list of UNESCO world heritage because of the Mutota Monuments and Tuwuyu Tusere, which is believed to be where the grave of Mutota lies.

“The Mutota Monuments is between Mbire and Muzarabani district and its ownership lies with the NMMZ,” said Mr Seremwe. “I have engaged them over securing the site and there are plans to fence it.

“We will engage the community over the protection of the site because without them preservation of the area will be difficult.”

Mr Seremwe said their rangers were patrolling the area, including the whole Mavuradonha Wilderness.

He said community resource monitors had been selected in the community under the CAMPFIRE project to protect the Wilderness and its biodiversity for it to attract tourists.

“We started bee keeping projects for four wards surrounding Mavuradonha Wilderness and they harvested around 300 kilogrammes of honey,” he said. “It is an incentive for the community to appreciate the mountain and its heritage.

“The Wilderness has the Sohwe Fall, water from springs known as ‘healing waters’. The water has a little bit of lithium which stabilises the mental well-being of a person. We have created 14 hiking trails which are scenic.”

They reintroduced 1 000 animals to make the mountain attractive to tourists.