The MDC exposed the sensitive details in a court application filed yesterday, in which  Tsvangirai is contesting the presidential election result. According to the court application filed at the Constitutional Court yesterday, MDC sensationally claims that registrar of voters Tobaiwa Mudede made several payments to Nikuv to assist the party in rigging the election between January and July this year. 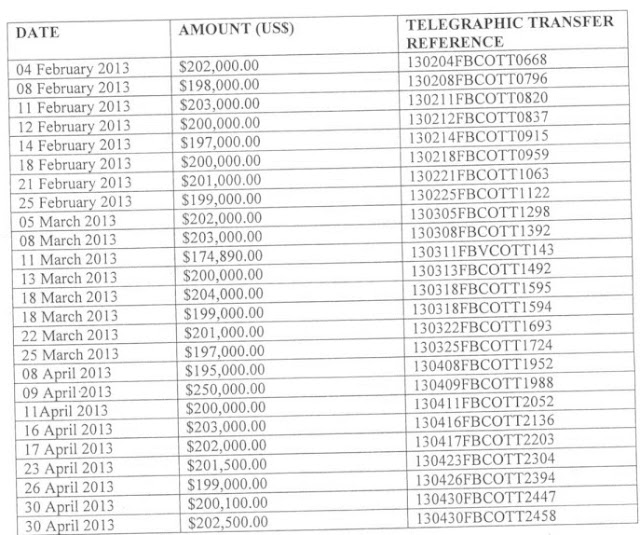 The Daily News has in its possession court papers with reference numbers of telegraphic transfers allegedly made to the Nikuv.

“What is also worrying is the involvement of an Israeli firm Nikuv Projects International, an Israeli firm in the development, management and manipulation of the voters’ roll.

In a letter dated 12 July 2013, Zec denied the involvement of Nikuv in the preparation of the voters’ roll.

“However, we have it on record that Nikuv has been operating in Zimbabwe since the 1990s.

“We present the table (below) payments that were done by the Registrar General’s office to Nikuv between February and July 2013,” the party claims.

The court document details how the Registrar General’s office made transactions involving several thousands of dollars to the firm through the telegraphic transfers. According to court papers, $10 578 335 was paid to the company for the job.

The MDC has claimed that systematic rigging and various election irregularities, including voters’ roll anomalies and the contracting of Nikuv, were used to manipulate the votes in favour of Zanu PF.

A private South African-based intelligence, Nasini Projects also sensationally revealed last week that the Israeli firm supplied a special watermarked ballot, which was used to give Mugabe and Zanu PF a resounding victory. This could not be independently verified.

Though Zec and the Registrar General have denied contracting Nikuv to work on the voters’ roll, the Israeli firm on its website cites Zimbabwe’s electoral process as one of its success projects.

“Using and implementing the most advanced state-of-the-art technologies in the field, NIP has successfully carried out large-scale projects in the government sector in various African countries,” the group wrote on its website.

The Israeli firm is alleged to have been involved in activities in Angola, Zambia and Lesotho among other African countries.

The controversial firm was taken to court in 1996 in Zambia on allegations of election rigging.

Its engagement in the country’s poll system was rejected after opposition parties unearthed the group’s record of meddling with the voters’ roll and their suspected rigging expeditions.

“Nikuv was hired to prepare the voter registers’ roll in 1995, prior to the 1996 parliamentary and presidential elections.

“These rolls were rejected by Zambia’s opposition, because preliminary checks revealed anomalies such as people being placed in wrong polling stations, incorrect names and in some cases, people who had registered to vote were simply omitted in the final registers,” a Zambian website, Zambiawatchdog.com revealed.

“While in the past voters were issued with voters cards on registration, under the new system voters had to collect cards at a later date. The registration exercise failed to capture a large number of eligible voters.

“Out of about 4,5 million eligible voters, only 2,3 million registered. In a number of cases, voters were registered under wrong polling stations and as a result, were unable to find their names in the registers on polling day.

A more serious problem to emerge was the large number of cases of people who had the same national registration numbers,” Zambiawatchdog.com wrote.

In Lesotho, the firm’s offices were recently raided by the country’s Directorate on Corruption and Economic Offenses over a suspicious  $30 million passport contract amid allegations of bribery, while in Botswana it got a controversial $9, 42 million contract with the country’s Home Affairs and registry offices.