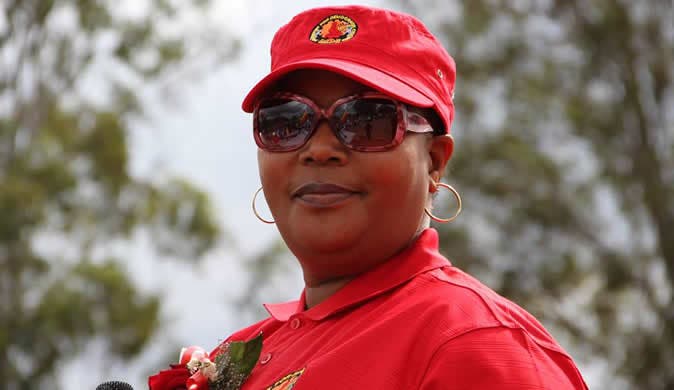 MDC-T leader Thokozani Khupe and her ally Douglas Mwonzora face a legal and political minefield following the crackdown against MDC Alliance legislators and councillors as part of their turf war against the party’s leader Nelson Chamisa.

Khupe and Mwonzora have in recent months recalled 21 MDC Alliance legislators and scores of councillors using a Supreme Court ruling that Chamisa’s elevation to succeed MDC founder Morgan Tsvangirai was null and void.

The ruling saw Khupe claiming control of the MDC Alliance despite the fact that the party defeated her MDC-T in harmonised elections two years ago.

The two have joined forces to launch an onslaught against Chamisa’s base and one of the strategies is to strip him of legislators and councillors that have refused to dump him.

Khupe and some of her allies are lining up to replace the recalled legislators with the Zimbabwe Electoral Commission (ZEC) already in the process of facilitating the former deputy prime minister’s return to Parliament through the back door.

Lobby groups and political analyst, however, say the MDC-T leaders risk falling foul of the law.

In a legal opinion, the Election Resource Centre said ZEC was violating the law by moving to replace MDC Alliance legislators with those from MDC-T while some court cases challenging the recall of the MPs were yet to be decided.

“In this case, there is room to challenge the constitutionality of the provisions, which compel ZEC to proceed with the process of filling vacancies even when affected Members of Parliament are still objecting to their recall,” the ERC said.

“These provisions of the Electoral Act, which leave ZEC with no discretion in the matter, are arguably unconstitutional as they interfere with the rights to a fair hearing and the right to fair administrative justice.”

Some of the recalled MPs argued in court cases that the MDC-T could not legally cause their ejection from Parliament since it was not the one that sponsored them in the previous elections.

“The ERC believes that it is premature for ZEC to proceed, as it has done, to issue a notice of vacancies when there are pending legal cases aimed at determining the legality of vacancies,” the ERC added.

“There are fundamental rights and freedoms, which are adversely affected by the hasty approach taken by ZEC in these matters.”

The lobby group said the replacement of MPs when there were still pending cases in the courts was a violation of the right to fair trial as enshrined in section 69 of the constitution as well as an assault on administrative justice as provided in section 68.

“This right, which includes legitimate expectations, would be meaningless if administrative bodies proceeded to implement decisions that are still under legal challenge,” the ERC said.

“For the same reason as the right to a fair hearing, the realisation of the right to fair administrative justice requires the legal process be concluded before a challenged decision is implemented.”

ERC argued that while ZEC can claim to be bound by section 39(4) to issue a notice of vacancies once notified by the speaker of the National Assembly and the president of the Senate, affected legislators still had a right to fair trial.

“The current provisions of the Electoral Act, which compel ZEC to act to fill the vacancies before the resolution of legal disputes over the circumstances leading to the creation of the vacancy, are arguably unconstitutional for the above-stated reasons,” it said.

ERC said the most important question ZEC should answer was whether the MDC-T was the right party to sponsor replacements for the recalled MPs.

“In the 2018 elections, the office-bearers who presented the party-list candidates to the nomination court did so on behalf of the MDC Alliance,” it said.

“It is, therefore, the party-list of the MDC Alliance.

“In addition, according to section 45E(2), a nomination paper is required to state the name of the political party and the address of its main office in Zimbabwe; the abbreviation of the political party’s name, which will appear on the ballot paper; and any distinctive symbol, which may accompany the name.

“The names, abbreviations and symbols that were put on the nomination papers of the affected Members of Parliament belonged to the MDC Alliance.”

ERC added: “Fourth, section 45D(1)(b) provides for the disqualification of a candidate where he or she has been nominated as a party-list candidate by more than one political party in the same election.

“Consequently, a candidate can only be on the party-list of one political party. In this case, that political party was the MDC Alliance. They could not have been nominated by the MDC-T in the same election.

“If that were so, they would have been disqualified in accordance with the Electoral Act.”

ERC said proportional representation MPs were awarded to the MDC Alliance candidates on the basis of votes obtained by the party as a single political party.

“Any separation could have produced an outcome that is wholly different from the current Parliament,” ERC said.

“There can be no doubt that the political party in question was the MDC Alliance, not any other party.

“It is common cause that ZEC recognised the MDC Alliance as a political party for purposes of the 2018 elections
.
“ZEC is required to invite the political party to submit a nomination to fill the vacancy.

“It has already been argued that based on the facts arising from the 2018 elections, the proper party that ZEC should invite to fill the vacancy is the MDC Alliance.”

The ERC said the reason why party-lists were filed was to ensure that the political party that fielded the candidate has the right to replace the MP if incapacitated.

“The ERC posits that the situation cannot be different if the vacancy arises after the election result is known,” the ERC said.

Ten residents’ associations from across the country have condemned the recalling of councillors by Khupe and Mwonzora, which they described as an attack on democracy.

“The rampant recall of elected councillors is a direct attack on representative democracy and seeks to throw away residents to the periphery of local governance, which has serious implications on both service delivery and answerability of officials to the electorate,” the residents’ associations said in a joint statement on Friday.

“Political parties must not act supreme over the voter; residents are the number one stakeholder in every political process and should be treated with respect.”

They said the recalls do not benefit the voters as they were motivated by a fight for power.

Obert Gutu, Khupe’s former deputy in the MDC-T, said although the recalling of MDC Alliance MPs was lawful, replacing them with members of a party they defeated in the last elections was morally wrong.

“However, a moral issue arises: It’s morally unsound and incredulous to replace the recalled MPs with people from another faction.
“Politically, it’s also not smart.

Gutu said he would not accept nomination into Parliament by the Khupe group on moral grounds.

“This is legally correct and bad politics, it is like telling someone who voted for Caps United that the result shows that he had voted for Dynamos,” the former Justice deputy minister said.

“Next time you still want to go and ask them for your votes. Will they trust you?

“This is a completely zero-sum game and I urge all the concerned parties to reach a compromise.”

“This is undermining the interests of voters because the people participated in an election where ballot papers were clearly marked and they knew the party and person they were voting for,” Mukundu said.

He said by including herself on the list, Khupe had shown that the recalls were motivated by greed and not the interests of voters.