Pakistan has become the first team to reach the milestone of 100 wins in T20Is. They have won 99 games outright and 1 match via a super over. Green shirts achieved this milestone against South Africa at QSL in Lahore. 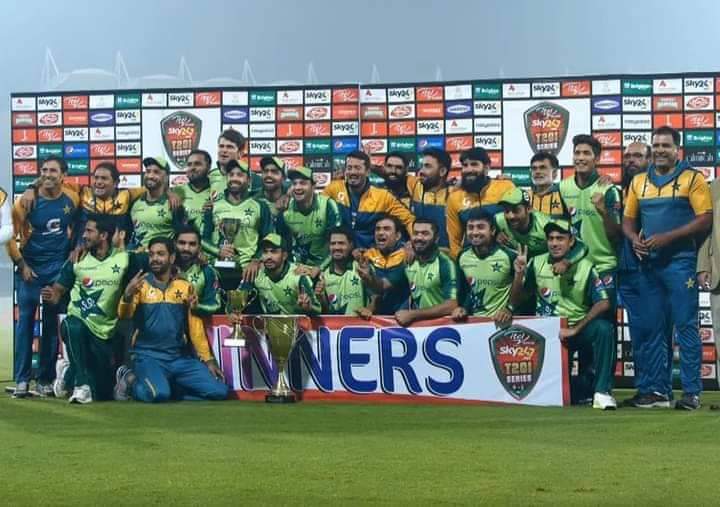 Pakistan captain Babar Azam won the toss and opted to bowl first.In 3rd T20 match, South Africa suffered an early setback after Hendricks was bowled by Mohammad Nawaz in the second over. The Proteas lost their second wicket soon after as Jon-Jon Smuts was caught out by Babar on Nawaz’s ball.Zahid Mahmood, who made his international debut in today’s match, got his first wicket when Proteas captain Heinrich Klaasen was caught out by Usman Qadir off Mahmood’s ball. He claimed his second wicket on the very next ball when Malan was ruled out lbw.Zahid claimed his third wicket in the 11th over, bowling out Dwaine Pretorius, the star of yesterday’s match.

South Africa set the score at a loss of eight wickets. The side’s top scorers were David Miller (85 not out) and Janneman Malan (27).From the Pakistan side, debutant Zahid Mahmood emerged as the top wicket-taker with a haul of three. Mohammad Nawaz and Hasan Ali took two each and Usman Qadir took one.

Pakistan lost their first wicket in the seventh over as Haider was bowled out by Shamsi. After two overs, Muhammad Rizwan out in ninth over. The hosts lost their third wicket to the left-arm spin bowler as well when we bowled out Hussain Talat.Later on, underperformed Babar Azam was bowled in the 14th over by Pretorius. The Green Shirts, chasing a 165-run target set by the Proteas, managed to win with four wickets in hand with eight balls to spare.

Player Of The Match : Mohammad NawazPlayer Of The Series: Mohammad RizwanPakistan won the first match by three runs while South Africa took the second by six wickets, both in Lahore.Pakistan Cricket Board Chairman Ehsan Mani has congratulated the Pakistan men’s national cricket team on victories in the Test and T20I series over South Africa.