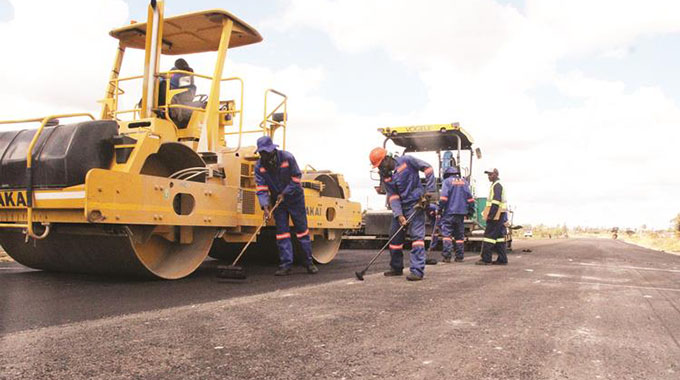 Staff from the Zimbabwe National Roads Administration (ZINARA) get down to work on the Harare-Mutare Highway yesterday as President Mnangagwa’s road rehabilitation programme moves into overdrive. – Picture by Memory Mangombe

Herald Reporter
Increased funding for massive roads rehabilitation projects being implemented countrywide by President Mnangagwa’s administration is beginning to have significant multiplier effects on people’s livelihoods as 4 000 skilled and semi-skilled jobs have been created so far, while 267 local companies have been engaged to supply materials.

The targeted public works being carried out under the Emergency Road Rehabilitation Programme (ERRP) have also created thousands of jobs in both downstream and upstream industries feeding into the project.

Development economists consider public works as economic stimulus projects through the demand they create in industries.
President Mnangagwa told a rally at Chipadze Stadium in Bindura, Mashonaland Central on July 7 that Government had lined up multiple economic stimulus programmes set to create thousands of decent jobs.

Overall, 38 local engineers and 84 technicians are superintending over the resurfacing, grading and construction of new roads and bridges across the country.

“Not only has this guaranteed efficiency in procurement, including timeous delivery of supplies, but it has also helped some industries retool,” said Mr Chinyanga.

“The reason for employing our own people is that we have gone through a rough patch over the past 18 to 20 years and our industry was almost dying as projects dried up. So it is a deliberate policy by Government to make sure that involvement of our own people, our own contractors, will make the industry active.

“They will start retooling because they are making a bit of money from what we are doing; they will then stand a chance to compete with whoever will come for bigger projects because they will have been empowered.”

Eng Chinyanga indicated that prices from local suppliers had been benchmarked to ensure Government got the maximum value for the lowest possible price.

“We have also fixed the rates for hiring equipment so that we, as Government, don’t compete to get services,” he said. “If you are in Mbire District (Mashonaland Central), you will get a grader at the same price as those in Harare.”

More than 30 companies have been roped in as equipment suppliers, while an additional 36 companies have been contracted to supply bitumen, tar prime (a ready to use, job-proven primer formulation of acrylic polymers that allows sealer), Stable 60 and Cat mix.

Further, there are more than 34 firms providing tippers, among other critical supplies for the road works.
Most of the country’s roads had become impassable over the past two decades as Government, which was constrained by meagre allocations to capital projects, was unable to rehabilitate the country’s road network.

A Government-sponsored Visual Road Condition and Inventory Survey – which was bankrolled to the tune of $1,7 million by the Zimbabwe National Roads Authority (Zinara) and was carried out in 2016/2017 by the country’s road authorities – indicated that more than $5,5 billion was needed to periodically maintain and rehabilitate the country’s roads to bring them to trafficable state.

However, under the new Government, Treasury-funded road construction projects have gone up by over 200 percent this year.

Also, during the first six months of the year, 18 600km of rural gravel roads were graded, 914km regravelled, 40 damaged bridges repaired, while 317 new culverts were constructed.

“This is unprecedented,” he said. “I have been provincial roads engineer for 10 years and I have never received this much money from Treasury. We have people who have been working in the Department of Roads since Rhodesia and they have not done this much road construction in a year.”