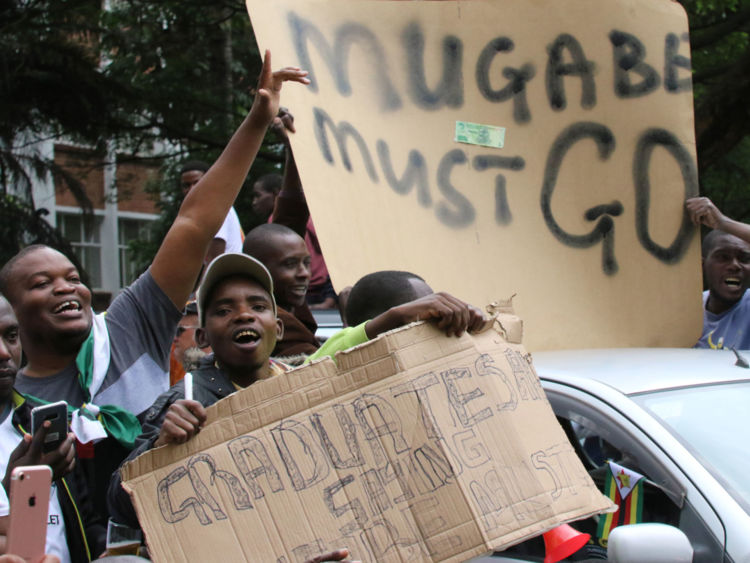 The leader of Zimbabwe’s war veterans has threatened to unleash the mob if Robert Mugabe does not resign his role as President.

The threat was made by war veterans’ leader Chris Mutsvangwa as he walked into a meeting of the ruling Zanu-PF party.

If Mr Mugabe refuses to step aside, he said: “We will bring back the crowds and they will do their business.”

He said he hopes Mr Mugabe “gives in” and tenders his resignation to avoid “the prospect of the military shooting at people, trying to defend him”.

He added: “The choice is his.”

Youth league leader Yeukai Simbanegavi said Mr Mugabe should take a rest as an “elder statesmen”, while his wife should be expelled from the party “forever”.

She said: “It is unfortunate that the president allowed her to usurp executive authority from him, thereby destroying both the party and the government.”

Those at the meeting are expected to sack Mr Mugabe as party leader on Sunday. He has so far refused to leave office and could face impeachment when the Zimbabwe parliament resumes on Tuesday.

Zanu-PF is also preparing to remove his wife, Grace Mugabe, as head of the women’s league.

Ousted Emmerson Mnangagwa is set to be reinstated as vice president of the party.

On Saturday, Mr Mugabe’s nephew insisted his uncle and Grace Mugabe were “ready to die for what is correct” and said the embattled President had no intention of stepping down.

Speaking from a secret location in South Africa, Patrick Zhuwao told Reuters that Mr Mugabe had hardly slept since the military seized power on Wednesday.

He added that Mr Mugabe’s health was “good”, but he would not legitimise the “coup” that overthrew him.

Mr Mutsvangwa, a former state security chief known as “The Crocodile”, is thought to be in line to head an interim unity government that will focus on stabilising Zimbabwe’s shattered economy.