Bob’s back from the grave again….not for the last time either…2018 beckons

On a sunny afternoon, a day before Zimbabwe’s elections on July 31st, Robert Mugabe fielded questions from foreign journalists. Seated on the patio of State House, his official residence, the 89-year-old joked about his much-predicted demise. He said he was supposed by his enemies to have died many times. “But they never talk about my resurrection.” 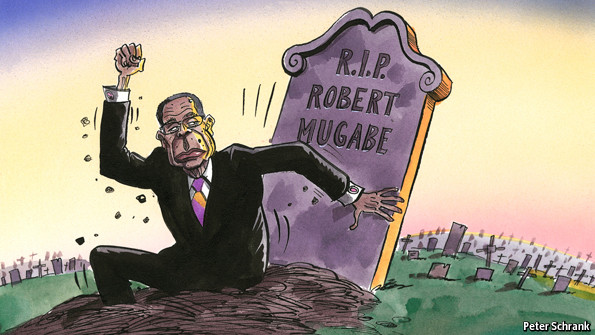 Bob’s back from the grave again….not for the last time either…2018 beckons

A few days later it became clear that Mr Mugabe’s political fortunes had revived in a way few were expecting. With 61% of the 3.5m votes cast in the presidential poll, he trounced his main opponent, Morgan Tsvangirai of the Movement for Democratic Change (MDC). Mr Mugabe’s Zanu-PF also overwhelmed the MDC in parliamentary elections, winning 158 out of 210 seats.

This was some resurrection for a man who is widely despised in his own country. Mr Mugabe’s political life briefly hung in the balance in March 2008 after he lost the first round in a presidential election to Mr Tsvangirai by 43% to 48%, based on an official count released five weeks after polls closed. The delay allowed results to be massaged so that Mr Tsvangirai was denied the majority that would have given him outright victory. A run-off was held in June but Mr Tsvangirai, horrified by violence that left 200 of his supporters dead, took no part in it.

Months later he joined Mr Mugabe in a unity government brokered by Zimbabwe’s neighbours. This was supposed to pave the way for a free and fair election the next time round. But having dragged his feet for years over the necessary reforms, Mr Mugabe suddenly called elections in June, wrong-footing the MDC and the Southern African Development Community (SADC), the regional body overseeing the process. An appeal to the constitutional court failed to delay polling day.

The MDC had said it would not contest elections unless there was sufficient time for it to register voters and to verify the voter roll. But with an election date set in stone, its leaders began to campaign. Some opinion polls suggested they could win, given popular disgust at 33 years of misrule by Mr Mugabe.

That judgment proved too optimistic. Within hours of the last ballots’ being cast, Mr Tsvangirai declared the election a sham and listed the rigging tactics used by Zanu-PF. A crucial ploy was to keep control of voter rolls. Likely MDC supporters, such as city-dwellers and the young, were kept away from polling stations. An analysis of the rolls on June 19th by the Zimbabwe Election Support Network, an independent body, showed that 68% of urban adults were listed, compared with almost 100% in the countryside. Many registered voters were turned away from local polling stations and redirected to faraway wards.

The MDC may have been cheated out of up to 1m votes. But that still leaves unexplained how someone as unpopular as Mr Mugabe could garner 2.1m ballots. It appears that a bedrock of support for Zanu-PF was augmented with the help of various fixes. Traditional rural leaders were a vital part of the Zanu-PF election machine. Given or promised money, they bullied their folk into asking for assistance with voting, for example by claiming to have trouble reading the ballot paper (even though Zimbabwe has a literacy rate of about 90%). A headman or official then accompanied them into the ballot booth and checked they voted for Mr Mugabe.

Zanu-PF also inflated the count with ghost voters. More than 100,000 centenarians were on the electoral roll. Many names of supporters were duplicated. The opportunity to vote could be secured by producing a registration slip, easily counterfeited. The pinkie finger of each voter was supposed to be marked to prevent double voting. But the ink used may not have been indelible. In key wards, boys below voting age were bussed in to claim a ballot paper.

The MDC is compiling a list of such grievances to challenge the legitimacy of the election in court. It seems destined to fail. Zanu-PF controls the courts, as Mr Tsvangirai has acknowledged. Nor will the opposition receive much support from neighbouring countries. Jacob Zuma, South Africa’s president and SADC’s pointman for Zimbabwe, pre-empted the final judgment of his election observer team by offering his “profound congratulations” to Mr Mugabe and urging others to accept the result. The head of the African Union mission to the elections, Olusegun Obasanjo, a former president of Nigeria, called the poll “fairly fair”. Weariness of Zimbabwe among the neighbours is palpable. They are relieved at the lack of violence.

The MDC now faces a battle to stay in one piece. Critics say Mr Tsvangirai made avoidable errors of judgment. It was naive, they say, to take part in an election without first seeing the voter roll (it was delivered just days before the election and then only in paper form). Some now wonder whether it was wise to enter into a coalition government with Mr Mugabe in the first place. It gave a severely weakened Zanu-PF time to regroup. By ceding the key ministries that oversee the profitable mines as well as the security forces and courts, the MDC in effect gave Mr Mugabe’s party the power and cash that ensured its election. Meanwhile, MDC bigwigs, distracted and seduced by office, failed to build a big enough presence in rural areas.

It is not clear at what point Mr Tsvangirai could have pulled out of the election without looking weak and scared. The MDC joined a unity government for the best of reasons: to rescue a country beset by hyperinflation, cholera and starvation. Mr Tsvangirai was often outwitted by Mr Mugabe but even the wiliest political operator could not easily have prevailed against an opponent who controls the army, police, courts and state broadcaster.

How will Mr Mugabe now govern? He has promised to create jobs, but last time Zanu-PF was in sole charge of the country white-owned GDP halved. Campaign promises to force businesses to hand over majority stakes to black Zimbabweans are unlikely to attract much-needed investment. Money is already draining from the country. On the first trading day after Mr Mugabe’s win was announced, the local stockmarket index dropped by 11%, largely because of selling by foreign investors.

Optimists suggest that Zanu-PF insiders must know there is not much in Zimbabwe left for them to rob. But will they row back from their election pledges? Mr Mugabe’s choice of finance minister to succeed Tendai Biti, the MDC’s secretary-general, will be a first clue. With luck he will choose a competent technocrat.

Yet no matter who gets the job, the outlook for the economy is worrying. Financial stability and low inflation returned four years ago with the adoption of the American dollar as legal tender. But that is under threat. Talk by Zanu-PF bigwigs of once again creating a local currency encourages the hoarding of cash. Banks have kept plenty of dollars in reserve in case depositors wish to withdraw funds to avoid the risk of a forcible conversion to a new currency. As long as uncertainty persists, growth will be scarce and the country will struggle. The mood in Harare is depressed. Mr Mugabe’s political resurrection has cast a deathly pall over Zimbabwe.