The Five Pillars of the State

I was talking to a friend on Saturday and he said to me that a Head of State has to manage 5 principle segments of the State in order to be successful. These are:

Source: The Five Pillars of the State – The Zimbabwean 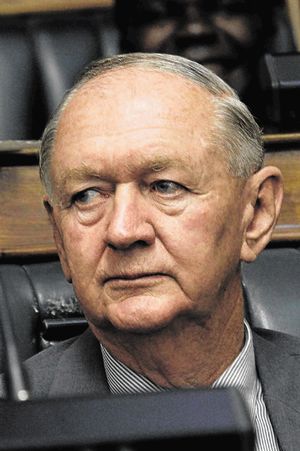 I said to him that this was a very neat and tight construct and that he should write it up. He is a chicken farmer and probably will not get around to doing so I thought I would have a go at it myself.

Firstly, our natural resources. It is often claimed that Zimbabwe has more resources per capita than Saudi Arabia. We have an amazing variety of minerals – over 40 at the last count and we seem to be finding more all the time. Several are of global significance – iron ore, gold, the platinum group of minerals, lithium, chrome, nickel, manganese, diamonds; the list goes on and on. However, these are locked in the ground on which we live and have no value if they are not extracted and processed and then sold on the global market. If you prove the resource by drilling and reach a certain level of discovery and geophysical mapping, you can sell a resource in the ground, but only if you can find a buyer who has the knowledge and the money to exploit the resource.

Unless we can do these things we remain poor while sitting on riches. We are a deeply corrupt State and in the past, we have thought that if we secured the title rights to a resource we could simply sell that title for real money. It’s not like that – when ESSAR, the Indian giant steelmaker signed a deal to spend US$10 billion on a new steel plant on a 40 billion tonne resource of iron ore, the deal was delayed and then collapsed because the individuals who held the title would not release the title unless they were paid several hundred million dollars. ESSAR spent US$60 million drilling and proving the resource and was then forced to abandon the project and go back to India.

Or a company with the knowledge and the money to exploit a resource, discovers it and is then is stripped of its rights by the Minister of Mines who subsequently oversee the exploitation of the resource on a corrupt basis and virtually all the output is exported with very little coming back into the country. That is what happened at Marange and it cost Zimbabwe at least US$15 billion in lost export profits. What a difference that would have made if it had been managed on the same basis as Botswana. Our gold industry, one of the largest in the world, is rapidly deteriorating into a war for resources between marauding gangs, often sponsored by politicians and corrupt business. The big loser is Zimbabwe and I estimate that less than a quarter of all gold produced is finding its way into proper channels. The system is not only shambolic, but it is also impoverishing hundreds of thousands of our people.

Then our infrastructure. When the settlers arrived here in 1890, they built railways and roads that have survived until today. It was all paid for by private companies or taxes and often to a surprisingly high standard. When Zisco Steel operated it was the largest integrated steel plant in Africa and the liner trains that supplied it with coal travelled at 75 kilometres an hour and had a turnaround time of 17 hours over 600 kilometres of track. Kariba Dam was the largest civil engineering project in the world in 1956 and was completed on time and in budget. It was fully paid for in 25 years.

Today our railways struggle to handle less than 10 per cent of the traffic they handled 50 years ago. No mining company or any other large enterprise can make an investment here today if they are not willing to invest in the infrastructure – trains speeds of 10 KpH are common and the roads are congested and dangerous. Our border posts are almost totally corrupt and it takes days to transit to a neighbouring State. Electrical energy and diesel supplies – well no comment is needed! Before the land reform exercise, Zimbabwe provided 8 per cent of European demand for vegetables and flowers – today we could never handle that volume – insufficient aircraft land at our main airports.

Then our human resources. We have a reputation, well deserved, for our educated and hard-working population. But today over half of all adult Zimbabweans work abroad, many will never come back. Migration in Africa is qualitative – we lose our best and we do not allow inward migration. In addition, let’s face it, our State school system is a total mess – children come out of the system after 7 years neither literate or numerate. Our Universities, once totally globally competitive, are a shadow of their former status as academic institutions. As for research – when last did you ever hear of any significant breakthrough’s. I can recall a time when the Department of Research and Specialist Services in Agriculture was the envy of the agricultural world.

There are two aspects to human resources – education and health. Both are in deep crisis and if we do not do something about this Zimbabwe will never be able to compete globally, in anything.

Then our Financial System. In my view, we are making real progress here. By and large, our banks are sound, our financial and accounting professions are among the best in the region and you can get advanced financial services when required. In addition, Zimbabwe is far ahead of many western countries in the field of electronic banking systems and transfer. Almost 100 per cent of our population uses cell phones for banking and payments.

In the recent past, our problem has been macro-economic management of our financial system. We have been deeply delinquent and thought that we could print our way out of trouble. We have learned the painful lesson that this simply destroys value and even currencies. But let’s face it, in 2019 we took many tough decisions and my, did it hurt – we devalued our inflated debt to manageable levels, we depreciated incomes that were higher than we could afford and be competitive and we brought our State expenditure under tight control. We also floated our currency and lifted all restrictions on the current account. I agree with the Minister of Finance and the IMF, our treasury is in good shape for the first time in many years, even decades.

Finally, our social cohesion and support. We are lucky to be settled by the people who live here in Zimbabwe. 85 per cent speak Shona and that in itself is a great advantage, so often in Africa, our ethnic divisions are a source of instability and conflict. The Zimbabwean population is also innovative and hard-working – ask anyone living in the region and they will endorse these as being national characteristics.

When we approached Independence in 1977 we voted for a transitional government and 83 per cent of our population voted for one Party. After Independence in 1980, 81 per cent voted for one Party. When the Military assisted the transfer of power from the Mugabe era in 2017, it was accompanied by an outpouring of national support and consensus that persuaded the world that the new Government had national support.

But Mr President, you must not take this cohesion and support lightly or for granted. It is conditional and we have been patient in 2018 and 2019 as you have sought to put us onto a new road. We expect you to manage the five pillars so that corruption in our affairs is dealt with, our people stop fleeing to other countries to survive and we can all work together to make Zimbabwe the great little country it can be.