Reading the media in Zimbabwe, even since the November 2017 military coup d’etat – which toppled long-time tyrant Robert Gabriel Mugabe, replacing him with his decades-long right hand man and protégé, Emmerson Dambudzo Mnangagwa – has been nothing short of traumatic, troubling, and downright angering, as the so-called ‘new dispensation'(whose ‘newness’ is in name only, considering that those presiding over it, are as worn out, and overplayed, as a 1980 vinyl music record) has unforgivably seemingly gone out of its way to make the lives of ordinary Zimbabweans a living hell.

Source: The greatest threat to Zimbabwe’s peace and security are not foreign entities, or their ‘stooges’, but it’s ZANU PF itself! – The Zimbabwean 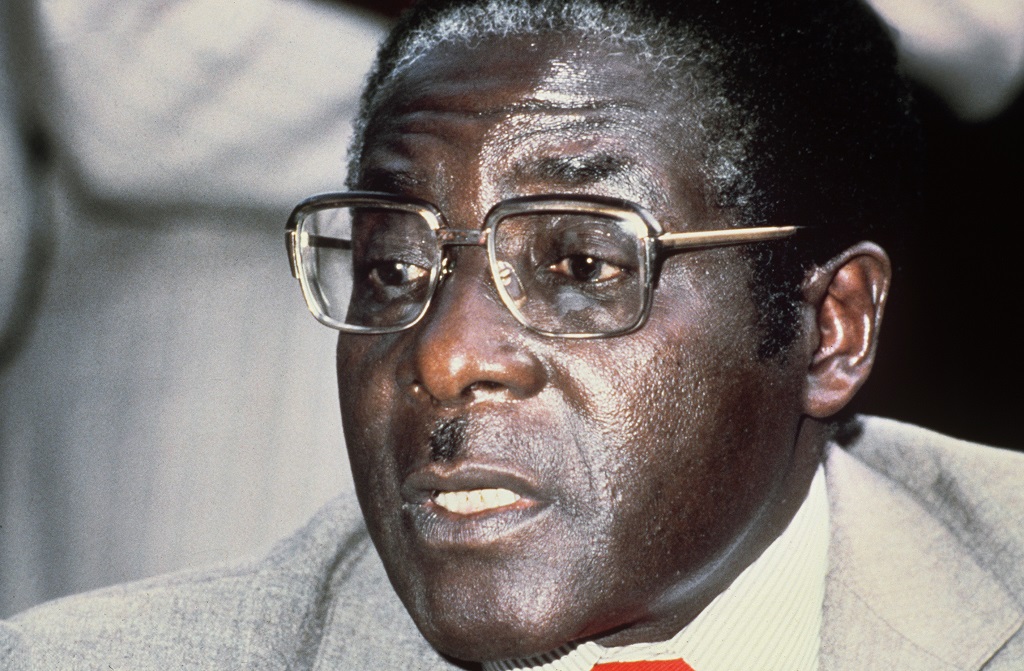 Robert Mugabe, is seen, in March 1980, in Harare. The Zanu party has won the general elections in Rhodesia, now Zimbabwe, with an overwhelming majority. (Photo by – / SCANPIX SWEDEN / AFP)

When does a single day lapse without reading how the ordinary man or woman on the street can not afford to buy even the most basic staple food, has no access to vital life-saving medication, has no capacity to pay for their children’s school fees, has no way to meet accommodation rentals  – as prices of practically everything essential to any semblance of a dignified life, worthy of any God-created human being, continue on their untamed and untameable skyward rabid explosion?

Not one, of the country’s long-burdened and economically oppressed citizens – outside the ruling powerful elite club – has been left unscathed by the ZANU PF regime’s cruelly untoward, unacceptable, and unbearable wanton and sadistically deliberate destruction of this once ‘Jewel of Africa’ into a pitiful, shameful, and tragic ‘Disgrace of Africa’ – whose everyday uncomfortable and traumatic topic of discussion, amongst its citizens, has been reduced to expressing sorrow, pain, and unbridled anger at how their lives have been atrociously turned upside down by this ruthless regime.

Why do I say deliberate?

Well, quite frankly, the economic challenges being unfairly foisted upon the generality of Zimbabweans are not that hard to resolve, literally overnight, had the ruling administration possessed a genuine desire – yet, the very thought of doing the right and proper thing…that is, sincerely stamping out corruption at the very highest echelons of power (where, the most ruinous and catastrophic effects of grand looting and plundering of our national resources, affects the entire economic ecosystem of the country), appears to thoroughly terrify them.

Let’s we forget that, this is not the first time that the country has been misled and misguided by the very same ruling (or, some say, ‘ruining’) ZANU PF party, as the dawn of the second millennium was greeted by the most brazenly barbaric, disastrous, and even murderous economic policies – characterized by the most toxic so-called land reform program, which resulted in the cold-blooded killing of multitudes of White farmers and their workers, with the subsequent acute food shortages; as well as hyperinflation that reached the millions (if not, billions) of percentages, resulting in a local currency that literally transformed all Zimbabwe citizen into the poorest multi-trillionnaires on the face of the planet.

However, in spite of repeated and concerted calls by all normal-thinking Zimbabweans for the government to dump the useless local currency, for the more stable United States Dollar (USD) – those in power stubbornly opted for self-serving, self-aggrandizing, but nationally horrendous economic policies, which only immensely lined up the pockets of those in power, yet severely crippling and destroying the lives of everyone else in the country.

Not until thoroughly losing the presidential elections in 2008 – and the ensuing most brutal and savage butchering of hundreds of opposition supporters, by the losing ZANU PF party, thereby forcing the establishment of a Government of National Unity (GNU) – did the regime finally adopt a much more sane ‘multi-currency system’, effectively abandoning the Zimbabwe Dollar, for the USD…resulting in a decade of relative economic stability.

So, why did the ZANU PF administration have to put the people of Zimbabwe through so many years of underserved and dreadful calamities – whereby, millions lost their life savings, investments, pensions, and insurance policies, on top of unbridled company closures, resulting in the loss of employment of millions more – whilst, fully aware of the literally ‘overnight’ obvious panacea of simply ditching the worthless and ever-depreciating local currency, for stronger and well-founded foreign denominations?

Of course, typical of this greedy, heartless, and remorseless kleptomaniac military-backed junta, their own self-interests always take precedence over the livelihoods of everyone else – no matter how much suffering they may endure – as those seemingly lunatic economic policies certainly carried some tremendous benefits for those in power.

Fast forward to November 2017, after the somewhat smooth years from 2008 – despite the cash shortages, culminating in the introduction of the local Bond Note in December 2016, ostensibly to buttress the liquidity crisis – the ‘old new military dispensation’ decided to revert to its default “the ruling class comes first, and the rest of the population can go to hell” economic policies – most notably, through evilly-planned decisions to declare the local currency not being at par with the USD (leading to a swift depreciation of the Bond Note, which had been acting as a temporary ‘substitute’ for USD-peged salaries and prices), re-introduction of the long-buried Zimbabwe Dollar, and making it the sole legal tender, in spite of the fact that the country desperately lacked the necessary fundamentals to fortress the local denomination.

Furthermore, the junta has been on a “tomorrow will never come” unashamed looting and pillaging spree, whereby billions upon billions of USDs have been unaccounted for, and have apparently vanished into thin air – from agriculture, mining, social security pension schemes, COVID-19 personal protective equipment procurement, amongst a whole host of flagrant rot.

Such have been the major drivers of the dismal and unbearable economic meltdown, which has embarrassingly hogged the media headlines for the past two years.

Zimbabweans are suffering, not because of some imagined economic sanctions imposed by the US and her allies in the country meant to cripple the economy, and trigger anarchy (which are in fact, merely targeted restrictions on 141 senior officials and entities fingered in state-sponsored violence, human rights abuses, and electoral fraud – in the form of travel bans, asset freezes, prohibition of any transfer of defence items and services, and suspension of non-humanitarian government-to-government assistance), nor was it originated by foreign-funded and inspired regime-change agendas, or local saboteurs and ‘elite opportunists’.

Our untold poverty and suffocation is solely blamable and attributable on the ZANU PF regime’s insatiable greed for self-centeredness and kleptomania – fulfilled through its corruption and unreasonable polices, that are singly intended to enrich the already overly ‘fat cats’ in power (and their cartel mafiosos).

Similar to the early 2000s, the solution to these current tribulations bedevilling the people of Zimbabwe, can be switched off at the flick of the fingers – via, earnestly and honestly stopping unfettered and repulsive corruption at the highest offices, and implementing economic polices that benefit the majority – and, given the nature of our economy, re-dollarizing is the best forward forward.

If the ZANU PF (mis)leaders truly wanted to make our lives livable, they could achieve these – just as in 2008 – with a simple policy announcement – but, the fact that they are reluctant to do so, proves beyond any shadow of a doubt, that they have absolutely no interest in ameliorating the lives of ordinary Zimbabweans.

Therefore, how does the ZANU PF regime honestly expect the over-burdened people of Zimbabwe to react to this clearly government-originated and engineered suffering? Do they expect us to simply sit back, whilst we wallow in abject poverty in silence? The citizenry has had enough!

We are not as stupid, shallow, and docile, as those in power clearly very erroneously and dangerously conclude.

We do not need any foreign intervention or plots, local saboteurs, or ‘elite opportunists’ – all presumably, consumed by an unquenchable thirst for regime-change inspired anarchy – to arouse our conscience.

We know fully well what we want and deserve, and we shall not foolishly watch, whilst our lives are cruelly turned upside down, yet the powers-that-be fatten themselves at our expense.

Even a dog knows when it has taken enough of any abuse by its owner, and will inevitably bite back – no matter how loyal it previously seemed. Yet, we are far much better and more advanced than any animal – as we were wonderfully and fearfully made, just below the angels, in the image and likeness of our Creator Jehovah God.

We have all been crushed under the massive boulder of this administration – whose only thing they have managed to administer, is their own citizens’ death and destruction – from nurses, teachers, soldiers, police officers, and private sector employees, to the self-employed, small, medium, and large businesses, and students, whose futures have been virtually shattered.

No one can ever steal that away from us, as we definitely know when to peacefully, but fearlessly and relentlessly, claim back our rights – no matter what the consequences. We are fully cognisant of the ruthlessness of this military junta, but that has never stopped a determined and empoverished people, who no longer have anything to lose.

We have the country’s constitution, our own bravery, as well as a fearless desperate desire to restore and reclaim our God-given dignity, on our side…and nothing can stop a determined people.

© Tendai Ruben Mbofana is a social justice activist, writer, author, and speaker. He is also available for those requiring editing, writing, and/or researching services for non-fiction and fiction books; advocacy and publicity material; press/media releases, and articles; policy blueprints; public speeches; manifestos; corporate or organization reports, documents; and university thesis/dissertations, etc. Please feel free to contact him on WhatsApp/Calls: +263733399640 / +263715667700, or Calls Only: +263782283975 / +263788897936, or email: mbofana.tendairuben73@gmail.com.