Western governments and the UN have expressed alarm as top Zimbabwe opposition figure Tendai Biti appeared in court after a dramatic attempt to flee to neighbouring Zambia and claim asylum. 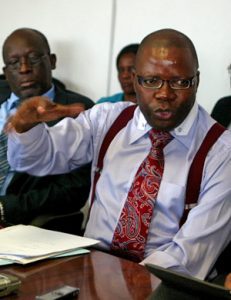 Biti, a veteran figure in the opposition Movement for Democratic Change (MDC), was taken handcuffed into a courtroom in Harare under a heavy police presence to face charges of public violence as well as the illegal declaration of election results.

“We will keep on fighting,” he told reporters, before being granted bail of $5 000 and having to surrender his passport.

Biti made a dash across the border on Wednesday, facing allegations of inciting protests last week by proclaiming victory for the opposition in Zimbabwe’s first elections since the downfall of Robert Mugabe in November.

Mugabe’s successor at the head of ruling party Zanu-PF, Emmerson Mnangagwa, was later declared the winner according to the official results, but the MDC has charged that the election was rigged.

Zambian authorities rejected Biti’s plea for political asylum and handed him back to Zimbabwean police on Thursday morning, in defiance of a court ruling, according to his lawyers.

The UN refugee agency said it was “gravely concerned” by reports that Biti, an internationally-respected finance minister in Zimbabwe’s 2009-2013 power-sharing government, had been deported while trying to claim asylum.

“Forcibly returning refugees and asylum-seekers to their country of origin is a serious violation of international refugee law,” the UNHCR said in a statement.

It urged Zambia to investigate the incident, which comes after accusations that Zimbabwe’s authorities are pursuing a heavy crackdown on the opposition as it pursues its claims of electoral fraud.

Zambian government spokesperson Dora Siliya said authorities had only received the ruling blocking Biti’s expulsion after he had been returned.

“His asylum was denied on the basis that in his country there is no breakdown in the rule of law,” she told AFP, adding that Biti himself was “running away from the due process of the law” as he was wanted by authorities.

Western nations said they were “deeply disturbed by continuing reports that opposition supporters are being targeted by members of the Zimbabwean security forces”.

In a joint statement, the EU, US, Canadian and Australian missions to Zimbabwe urged authorities to “guarantee the physical integrity and safety of Mr Biti, to ensure that his constitutional and human rights are respected, and that he will be treated in full accordance with the rule of law”.

His deportation was likely to come up in talks between South African President Cyril Ramaphosa and his Zambian counterpart Edgar Lungu in Lusaka on Thursday.

At a packed court hearing, prosecutors accused Biti of egging on protesters on August 1, urging them to pull down a Mnangagwa campaign poster while telling them: “Remove that poster, we don’t want thieves in this country.”

The protesters went on to burn the poster while damaging property at the Harare offices of ruling party Zanu-PF.

The army opened fire on protesters that day, killing six people and prompting an international outcry.

Mnangagwa, who is seeking to reverse Zimbabwe’s economic isolation and attract desperately needed foreign investment, had vowed the elections would turn a page on Mugabe’s repressive 37-year rule.

But the aftermath of the polls has been marred by allegations by rights groups as well as the MDC of a crackdown on opposition members, including beatings and arrests.

Chamisa said on Thursday that he would launch a legal challenge against the results by the end of the day, but the party had not done so by the time the Constitutional Court closed. Friday is the deadline.

Mnangagwa won the July 30 election with 50.8% of the vote – just enough to avoid a run-off against Chamisa.

He said the party would reveal “a secret weapon” in court, but analysts say the challenge is highly unlikely to overturn the declared results.

The Zimbabwe Election Commission – synonymous with fraud under Mugabe – insists the elections were free and fair this time around.

International monitors praised the conduct of the election itself, although EU observers said Mnangagwa benefited from an “un-level playing field” and a degree of voter intimidation.