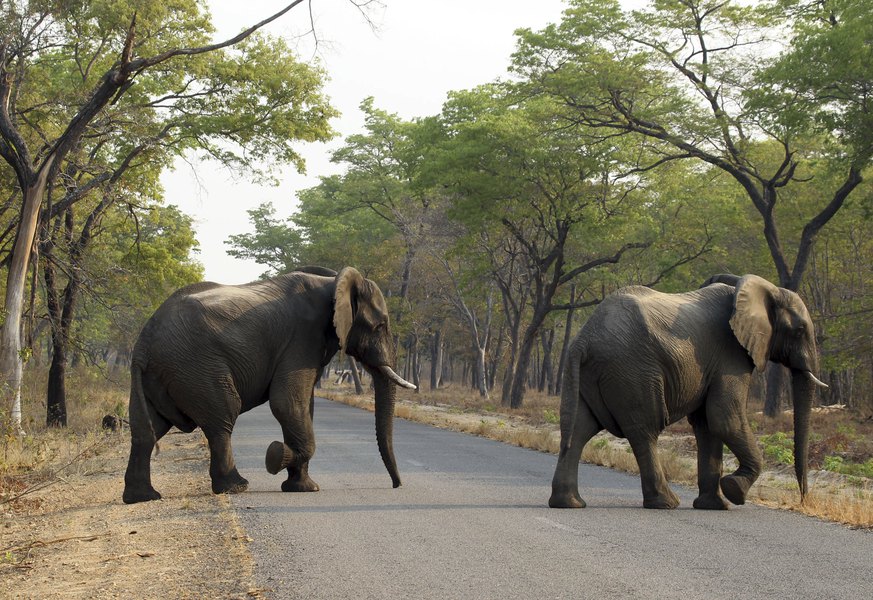 South Ogden author Cliff Graham — one of 16 U.S. residents to get controversial federal permits this year — says he is ‘adamantly opposed’ to trophy hunting in Zimbabwe.

Editor’s note: This story has been updated with additional information.

A Utah hunter appears to have been caught up in a contentious debate over whether trophy hunting of elephants and other endangered wildlife improves species’ chances of survival, or instead ushers them toward extinction.

South Ogden resident Cliff Graham was among 16 U.S. hunters awarded permits by the U.S. Fish and Wildlife Service (FWS) this year to import elephant trophies from the African county of Zimbabwe — even though there was a short-lived ban on such imports in place at the time, according to recently filed court papers.

Graham’s permit, identified in federal court filings, was awarded Jan. 25 by FWS — four days after President Donald Trump took office — and was set to expire after a year. Available records do not indicate whether he actually killed an elephant or brought any trophies home.

In response to a Salt Lake Tribune query, Graham said Tuesday he is not planning to hunt an elephant. An author and producer, he said he instead sought the permit as part of film project about trophy hunting.

“The filmmakers are anti-trophy hunting but everyone is keeping an open mind,” Graham wrote on an email. “I respect the ban, and even though I would say that I have seen the benefits of trophy hunting in some local communities, in Zimbabwe, I am adamantly opposed to the idea that the government there can adequately manage any trophy hunting,” he wrote.

Last month, the Interior Department announced it was lifting the Obama-era trophy import ban with a Nov. 17 posting by FWS officials on the Federal Register, sparking controversy and lawsuits.

Federal law says that trophies from endangered exotic wildlife cannot be imported to the U.S. unless wildlife officials have determined that hunting “enhances” the species’ chances of survival. Officials with the Obama administration ruled in 2014 that Zimbabwe’s elephant-hunting program could not guarantee that taking trophies actually helped boost elephant populations, and instituted a ban suspending the imports from south African nation.

Last month, Connecticut-based Friends of Animals— joined by the environmental group Zimbabwe Conservation Task Force — filed suit in U.S. District Court in Washington, D.C. challenging FWS’ lifting of the ban and claiming the agency had “abused” its discretion by issuing the permits.

“It is outrageous that despite finding that Zimbabwe has no effective program to conserve the African elephant population in that country, that FWS would covertly issue this year 16 permits authorizing the killing of elephants in that country by American hunters,” said Michael Harris, director of Friends of Animals’ wildlife law program.

“These permits were issued without any opportunity for non-agency scientists and other interested parties to provide information regarding the impact the issuance of these permits would have on African elephants in Zimbabwe, which will be completely devastating,” Harris said in a statement.

On Monday, while declining to comment on the litigation, FWS denied it had violated the prior ban by issuing the 16 import permits to U.S hunters, including Graham. “They were only for animals legally hunted during the Obama administration and prior to the 2014 suspension,” the agency said.

In the meantime, though, President Trump has confused the discussion and seemed to undercut his own administration by announcing on Twitter he was putting a hold on issuing new permits going forward.

“Big-game trophy decision will be announced next week but will be very hard pressed to change my mind that this horror show in any way helps conservation of Elephants or any other animal,”Trump wrote on Twitter Nov. 19.

The Republican president’s announcement did not prevent groups from filing lawsuits the next day.

“It takes more than a tweet to repeal an agency decision,” said Tanya Sanerib, a lawyer for Center for Biological Diversity, which is also suing over lion-trophy imports from Zimbabwe. “We need something real and tangible from this administration.”

“A hunter, with aid from his professional guide or outfitter, will generally donate all the meat from the elephant to help feed local villages and communities,” Babaz wrote. “Hunters and the business they bring to countries like Zimbabwe and Zambia help provide jobs for local residents as guides, cooks, drivers, etc. Hunters often also make personal contributions to anti-poaching units and help provide financial support for community projects like the building of wells, schools etc.”

Safari Club had unsuccessfully sued to overturn the Obama trophy ban and Babaz contends banning trophies would not stop the killing of African elephants.

“Without the removal of elephants by U.S. hunters,” Babaz wrote, “others will find the need or the opportunity to kill those elephants, both for illegal and legal purposes.”

Friends of Animals and other groups, however, say claims that trophy hunting helps wildlife are self-serving myths debunked by research. Lawful trophy hunting promotes trophy markets which, in turn, creates financial incentives for poaching, they contend.

The largest land animals currently roaming Earth, elephants once numbered in the millions, but they have become increasingly rare despite international protections and the rise of wildlife preserves patrolled by armed game wardens. Elephant numbers have dropped by 6 percent between 2007 and 2014, according to The Great Elephant Census, an Africa-wide count of the animals completed in 2016.

In addition to habitat loss and conflicts with human communities, poaching remains a major threat to elephants, with the animals killed and harvested for the valuable ivory contained in their tusks.

According to pro-hunting groups, regulated hunting should be encouraged because it creates incentives for impoverished nations to manage elephants, rhinoceros and lions sustainably. That idea is reflected in FWS’s Federal Register rule-changing post on elephants, but the posting’s links to documents that purport to explain the rational for the agency’s“enhancement finding” are either broken or contain no content.

Through Freedom of Information Act requests, Friends of Animals obtained copies of the 16 permits FWS awarded this year, while the ban was in place.

But the group said it has yet to receive the underlying permit applications, which would indicate either whether the elephant had already been killed, or where and when the animals were to be hunted, including specific map coordinates. The applications would also provide descriptions of the trophies to be imported and the name and address of the person shipping them.

According to FWS, trophies may include “bones, claws, hair, head, hide, hooves, horns, meat, skull, teeth, tusks, or any taxidermied part,” such as a rug, head, shoulder, or full mount. Trophies do not not include articles made from a trophy, such adornments, curios and jewelry, whose importation requires a different application.

Trophy-permit applicants must certify that they personally hunted the animal taken and are using trophies strictly for personal purposes. Trophies may not be sold, donated or exchanged in any way that would resulting economic gain. And ivory may not be exported once it enters the United States.

The FWS order lifting the import ban in November was made retroactive to Jan. 21, which would cover the Graham permit.

But critics complain that nothing actually changed that day regarding the nation’s elephant hunting program. Zimbabwe lacks the resources to implement its conservation plan or enforce its requirements, according to the Friends of Animals lawsuit. And the country’s 500-elephant hunting quota remains unchanged, although, the suit claims, the number lacks a scientific basis.

Critics are also concerned there are no guarantees Zimbabwe will live up to its conservation commitments or that money the country collects from hunting fees will not line a corrupt officials’ pockets instead of supporting elephant conservation.

Meanwhile, the lifting of the trophy ban also coincided with the overthrow of the country’s long-time dictator Robert Mugabe.

“It’s terribly embarrassing that the administration is finding a government can manage its elephant population in the midst of a coup,” said Sanerib, the lawyer for Center for Biological Diversity. “With the political instability in Zimbabwe — a country with a long history of corruption — now is not the time to say, ‘Yes, you can take care of your wildlife.’ ”

Clarification: Cliff Graham of South Ogden told The Tribune Tuesday he is not planning to hunt elephants in Zimbabwe. A prior version of this story mis-characterized his statements about his intentions.