US Govt: President Mnangagwa Remains Under Heavy Sanctions Until He Proves He Is Better Than Mugabe

Source: US Govt: President Mnangagwa Remains Under Heavy Sanctions Until He Proves He Is Better Than Mugabe | ZimEye

Staff Reporter| President Emmerson Mnangagwa was yesterday told he is to remain under the heavy slab of sanctions until he has proven that he is a change man. 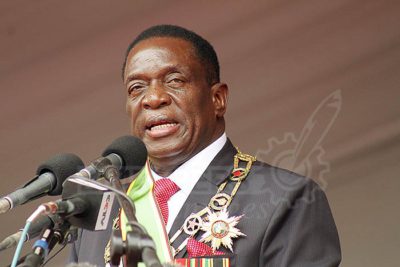 This was announced by a US government representative at a senatorial session last night.

When asked on accountability for atrocities, Mnangagwa could be an even more repressive leader than Mugabe, …. how the US government levels that?, the Principal Deputy Assistant Secretary, Bureau Of African Affairs, Hon. Stephanie Sullivan, replied saying,

“One of the things we will be looking for is for the people of Zimbabwe to organise some sort of truth and reconciliation process so that they can work through these traumas of the past. As far as President Mnangagwa , he remains under US sanctions, and again the government is in front of us right now and we are going to try to work to engage positively; he in his inauguration speech really wanted people to look forward, forget about the past, we are going to deal with him and other members of the government but again not just appeal to … but try to help the government and the people of Zimbabwe who have gone through this very dismal track of human rights.”

When asked, to expect the government led by someone who has participated, responsible for horrific violations, horrific human rights atrocities; to expect there to be a real Truth And Reconciliation Commission from a government led by someone who has a record that the whole state department sees to be this horrific this, should we really be as expecting a real Truth And Reconciliation process?, Stephanie Sullivan said, “We certainly don’t believe this will be a spontaneous course of action without a great deal of pressure and discussion and its not just the United States, its also as I mentioned the like minded partners and a very active civil society;

“there were so many people out in the streets, celebrating the prospects of a new Zimbabwe, and we think in some ways, maybe not dramatically, yes but the line shave moved and the kinds of oppression that people felt obliged to withstand in the predecessor regime, I think that its been a bit of a game changer despite the fact that its the same people who are running the show at this point.”