Seeing a picture of vintage or classic vehicles is enough to sooth the soul of a discerning car enthusiast.

These come in the form of sedans and station wagons of several makes, colours, and sizes. In fact, these timeless automobiles, especially those manufactured in the 19th century, have left many tech-obsessed modern drivers yearning for the good old days.

The safari business is located some 60km south west of the Beitbridge border post, at the centre of the Greater Mapungubwe Transfrontier Conservation Area (GMFTCA).

The area is rich with a lot of animal species and cultural heritage sites which include dinosaur fossils in the Maramani communal lands.

It is also made up of components of national parks from Botswana, South Africa, and Zimbabwe and has been a destination of choice for international tourists for over 15 years. In general terms, antique cars are 45 years or older, while classic cars are 20 years or older and the vintage collection is at least 30 years old from the date of manufacture.

Mr Bristow boasts of a fleet of Land Rovers of all classes at the safari. Land Rover vehicles have been evolving since 1948 when they became the second-oldest four-wheel-drive vehicles in automotive history after Jeeps.

The vehicle has been named ‘Morocco’, as Mr Bristow intends to drive it from Beitbridge to Morocco.

“It took me 18 months to fix the vehicle and this is an important possession. A prized collector’s item. In fact, it is very valuable in England if exported there and the original restoration is done,.

He said he got the body from a scrapyard in Bulawayo where the vehicle was about to be cut up into scrap metal.

A friend, who knows his passion notified him of its availability and he managed to negotiate with the owners who sold it for R12 000. Mr Bristow said he has a lifelong passion for Land Rovers and did not hesitate to act when his friend notified him about the vehicle. 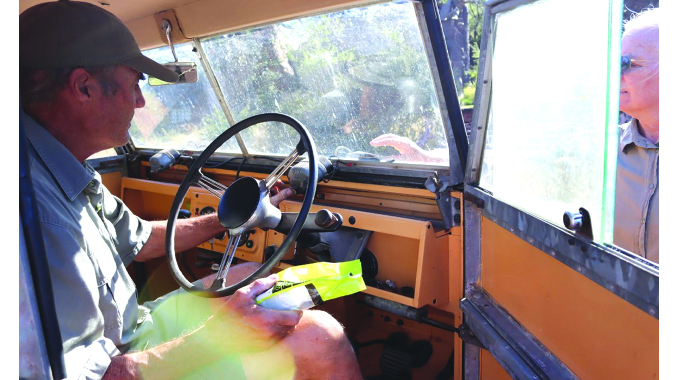 “I like their style, the history of the vehicles, design, and the technical construct. On fuel transmission, the four-wheel-drive vehicle uses diesel. It’s a 2,5 litre diesel engine,” he said.

“When I got it, the car was a non-runner, but the body was still in great condition. It was green and had no engine.

“I rebuilt the engine from scratch. Its maximum speed downhill is 50 miles per hour.”

The vehicle has since been painted orange and is yet to be registered with authorities.

Mr Bristow, who is popularly known as Digby in Beitbridge and in tourism circles, said he loves driving around the farm and was very tempted to drive to Morocco in his antique possession. He is a self-taught mechanic.

“I’m a farmer and grew up with Land Rovers. I have been collecting them for years. They are like big Meccano sets. They were designed for one to be able to pull them apart and put them back together again,” he said.

“I have rebuilt most of them,” he said.

Mr Bristow said he was yet to drive “Morocco” farther than the farm and that he was hoping to go to Gonarezhou National Park with other Land Rover enthusiasts in September or October this year.

He said although the vehicle was roadworthy, he was struggling to get windshield wiper blades.

His wife and children, he said, had been very supportive for the last 18 months when he was rebuilding “Morocco”.

“This was a Covid-19 lockdown project. It gave me something to do while our safari clients were unable to travel during 2020.”

He said rebuilding a vehicle is never easy and needs commitment and dedication.

In some cases, Mr Bristow would struggle to access spares as most of the vehicles moved off the assembly line ages ago.

“Some original spares are no longer available but there is a big body of Land Rover collectors all over the world so one joins a Land Rover Club or group of enthusiasts.

“These are platforms to network for the obsolete spares one needs,” he said.