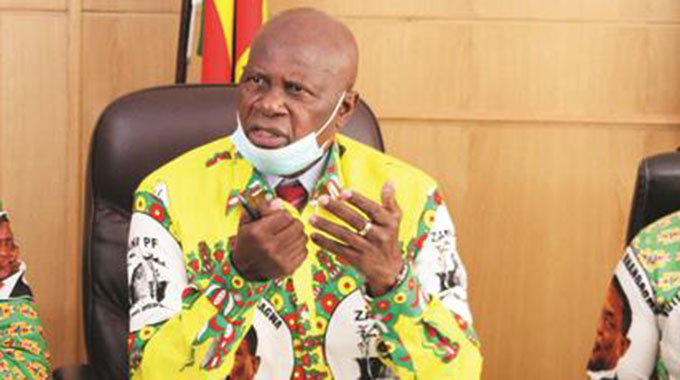 ZANU PF has axed and suspended some party officials for name-dropping, while investigations are underway to name and shame more such malcontents, the governing party’s acting spokesperson Cde Patrick Chinamasa has said.

This comes as President Mnangagwa has declared zero tolerance to corruption, saying any corrupt person, regardless of political status or connections, will be arrested and prosecuted in accordance with the laws of the country.

The latest move by Zanu PF to crack the whip on wayward members also comes at a time when some unruly elements both within Government and the party have been abusing the names of the First Family to cover up their repugnant criminal activities.

Consequently, Cde Chinamasa told the media yesterday that the revolutionary party will not hesitate to weed out people who abuse the names of the First Family, with action has already been taken against certain individuals.

“We have noted with concern that these name-droppers are abusing the names of senior leaders in the party, Government and the First Family. They allege that they are relatives of senior leaders and go about conning people in the name of our leadership.

“That should stop forthwith. Here at the party, we have fired some of these name-droppers, conmen and con-women who abuse the name of the party and leadership. We challenge all media players to expose these fraudsters and extortionists whenever you come across them. In the next press conference after full investigations, we will name and shame them,” he said.

Already, the revolutionary party has fired four employees and suspended another four from various departments for abusing the names of the party leadership, while some cases are still under investigation.

Government has expressed concern with growing cases of name-dropping whereby some people claim to be connected to critical offices in order to evade arrest.

The First Family in particular has suffered the most from name dropping as unscrupulous elements have often evoked names of members to wriggle themselves from arrest.

On Sunday, First Lady Auxillia Mnangagwa had to issue a statement after a man who is implicated in the gold smuggling case involving Henrietta Rushwaya falsely claimed that members of the First Family were involved.

And comprehensive investigations that were carried by the police have since established that the accused man, Gift Karanda, lied to police officers in order to obstruct or defeat the course of justice.

But despite the actions of the name-droppers and some elements who seek to besmirch the First Family, Government will not be deterred by those who are still living in the past and continue to use tired tactics to advance their corruption agendas.

Addressing a press conference on Monday, Information, Publicity and Broadcasting Services Minister Senator Monica Mutsvangwa said malicious reports that seek to link President Mnangagwa and his family to corrupt individuals are by no means a coincidence; rather they are a well-coordinated attacks on the system, which is intended to agitate Zimbabweans into demonstrations and uprising.

“Predictions by the country’s detractors to the effect that the economy would implode by year end have been shown to be wishful thinking; on the contrary, the country has achieved macroeconomic stability and tamed inflation much to the disappointment of purveyors of doom,” she said.

The goal of the Second Republic, Minister Mutsvangwa said is to grow the economy transparently and to foster the spirit of hard work in citizens.

The Government is currently working on infrastructural developments in all sectors of the economy, such as roads rehabilitation, power generation and dam construction, among others initiatives to stimulate economic growth and attract more investments.