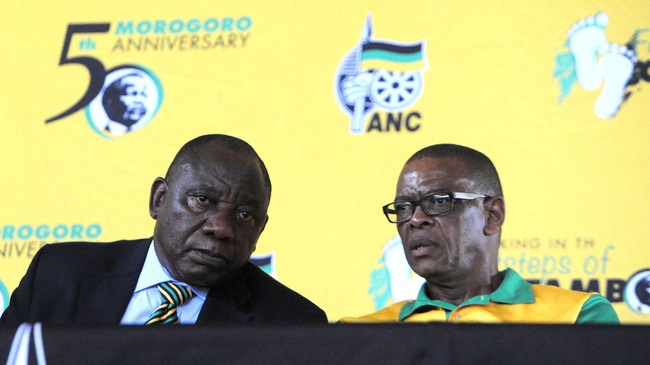 ANC secretary-general Ace Magashule was last week suspended by the party and ordered to “step aside” in a party resolution that ordered all leaders that were implicated in acts of corruption to temporarily step aside until their cases were finalised.

Magashule last year led the ANC delegation to Zimbabwe to deal with the political crisis here.

He defied his suspension last week and instead, counter-suspended South African President Cyril Ramaphosa, whom he alleged had corruption allegations to answer to also.

Zanu PF spokesperson Simon Khaya Moyo yesterday said his party would not interfere in the fight.

“What is happening in the ANC is purely an internal matter for the ANC and if there is need for them to let us know and be aware of anything, we shall obviously welcome that, but certainly that is a purely internal matter.”

On Friday, Moyo told journalists that Zanu PF would not be sending a delegation to interfere in ANC internal processes.

“One thing you should be aware of is that President Cyril Ramaphosa shares notes with President Emmerson Mnangagwa. They share notes on what’s happening. The President is abreast with what’s happening and they share notes more often. When the ANC sent their delegation here, it was their decision. As Zanu PF, we believe in non-interference. You want us to send a delegation to wine and dine in hotels and nightclubs?”

Zanu PF and the ANC last year crossed swords after the South African ruling party insisted that there was a crisis in Zimbabwe which needed immediate intervention.

However, Zanu PF insisted that there was no crisis in Zimbabwe and blocked the ANC delegation from meeting civic society and opposition parties to discuss the crisis.

“Nothing has changed. South Africa remains a key player in our region and especially for our country. We believe South Africa is a democracy and has strong institutions that can mediate any internal issues that might arise,” she said.

“The same applies to the ANC as a political party. It is certainly different from Zanu PF that meddles in the affairs of State institutions and forces them to parrot their narrow partisan views. We remain hopeful that our brothers and sisters across the Limpopo will help us in resolving the huge challenges we face. South Africa remains a regional power.”