Zimbabwe’s national vaccination programme remains the leader in sub-Saharan Africa with 27,27 doses of Covid-19 vaccine administered for every 100 people and 16,6 percent of the total population having at least one dose by Saturday.

This is significantly ahead of second-placed South Africa in sub-Sahara which has given 19,86 doses for every 100 people and with 15 percent of the population having had at least one dose.

In both measures Zimbabwe is running at almost four times the African average of 7,16 doses per 100 people and 4,7 percent of the continent’s population having had at least one dose.

Last week Zimbabwe hit a number of milestones in its programme. On Thursday last week the four millionth dose was given, just 15 days after the three millionth dose, on Tuesday the number fully vaccinated with both doses went over 1,5 million, and on Saturday the number entering the programme by getting their first dose went over 2,5 million.

By Saturday evening 4 109 734 doses had been administered with 2 513 353 people having had their first shot and 1 596 381 now having had both and so are fully vaccinated. The number of fully vaccinated people is now over 10 percent of the entire population. 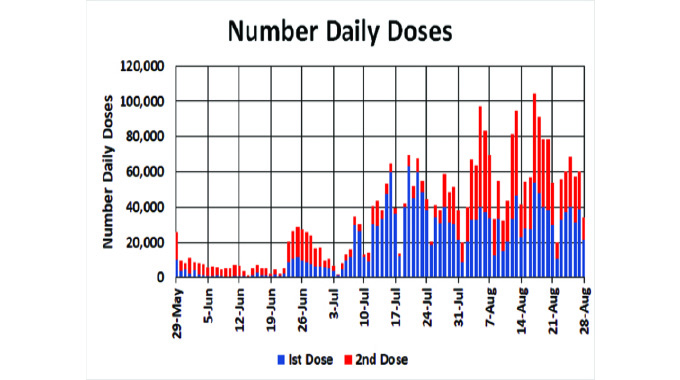 At the same time, the infection rate continues to fall with the seven-day rolling average dropping to 268 a day by Saturday, about a tenth of that seen at the peak of the third wave and only a little over seven times the average between the second and third waves.

The average death rate last week tended to stick at just over 20 deaths a day, a sharp drop on the almost 80 at the third wave peak.

One worrying factor last week was that the number of vaccine doses administered fell just over 30 percent to 357 112 from the 517 933 the week before.

Almost all of this drop came from the fall in the number seeking a second dose, reflective of the rate of administration of first doses four weeks earlier, but there was still a small drop in those wanting a first dose.

Zimbabwe has now sorted out its supply chain with payment in advance and a good relationship with its two main Chinese suppliers so deliveries come well in time.

At the same time vaccination teams run by or approved by the Ministry of Health and Child Care have shown that they can easily surpass 500 000 jabs a week with a number of measures now being implemented to push this even higher. So any drop appears to arise from fewer Zimbabweans ready to stand in line.

Vaccination rates do fall at weekends, and especially on Sundays, since most local authority clinics do not have shifts for general work such as vaccinations, but Zimbabwe has seen more than 100 000 jabs given on a single day midweek.

The fall last week, which was still the fourth best week on record since the programme started in February, implies that more people need to be encouraged to step forward.

Last week, the Government also authorised vaccination for 14-17 year-olds. Those aged 18 and above were already included in the programme.

This came at the same time as the announcement that schools will re-open for a long four-month second term starting from today and already there have been strong suggestions that vaccination teams could visit high schools to vaccinate those who wish to take up this new move.

At the same time a growing number of those church and civil leaders who before were reluctant to embrace vaccination now giving their endorsement of the vaccination programme.

While Zimbabwe leads the statistics in sub-Saharan continental Africa, with a procurement programme now rated at First World levels, it ranks sixth in the African Union. 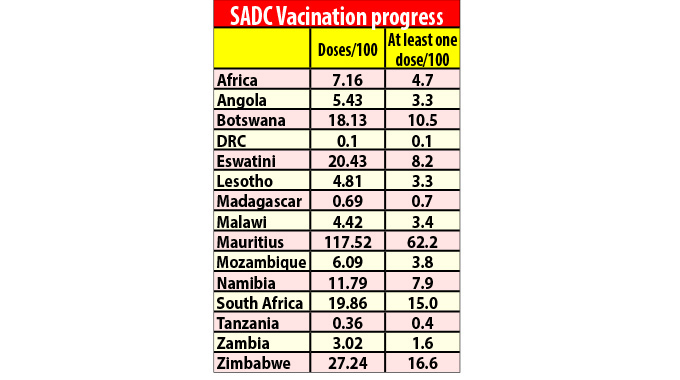 Two very small upper middle income Indian Ocean island states, Seychelles and Mauritius, have the top two slots and another tiny island state, this time Cape Verde in the Atlantic Ocean, also ranks high. Small island states with their low populations concentrated in a very small area find it easier than most to get the vaccines out.

Zimbabwe’s initial target is 10 million people, about 66,6 percent of the total population and thus a far higher percentage of adults, and now more than a quarter of that target have had their first dose and almost 16 percent are fully vaccinated.

The target might have to be adjusted to take into account the extension of the programme to teenagers.

Most vaccines, including the five approved in Zimbabwe, are now known to be safe when given to teenagers, but there is continuing research on safety to see if younger children could be vaccinated.

There is a growing trend around the world to allow the vaccinated to move into a more normal life. This is seen in Zimbabwe where already the fully vaccinated can now attend church services and eat in restaurants. As countries reach higher vaccination rates more relaxations have been granted to the vaccinated.