They call it Blackie or Green Waters and it has accounted for over five deaths in the last five years.

Rarely do people live to tell the story when he strikes.

He rules the waters and when he is around daredevil antics cease.

Fishermen have braved the waters of Lake Kariba in search of the delectable Kariba bream and occasionally, the tiger fish.

In man’s quest for the famed fish, fishermen have had to develop a heart of steel as they seek to conquer the territory of an established hunter and king of stealth with mean jaws.

Such is the bravery that thousands of people daily venture into the lake shores with their nets and fishing rods.

One such venture ended badly for 34-year-old Elgin Tirabu of Nyamhunga 1 in Kariba when he was attacked by the infamous crocodile, Blackie or Green Waters.

He sustained deep lacerations on his hands which needed specialised care.

In the aftermath of the attack, Tirabu now has plastered hands which were threatened with amputation.

On the fateful day, July 12, 2020, Tirabu went to the Green Waters Bay where he normally gets his haul of fish to sell in Kariba Town.

“We laid nets together with my partner. I was leading in the front when suddenly I was attacked by a crocodile,” said Tirabu. 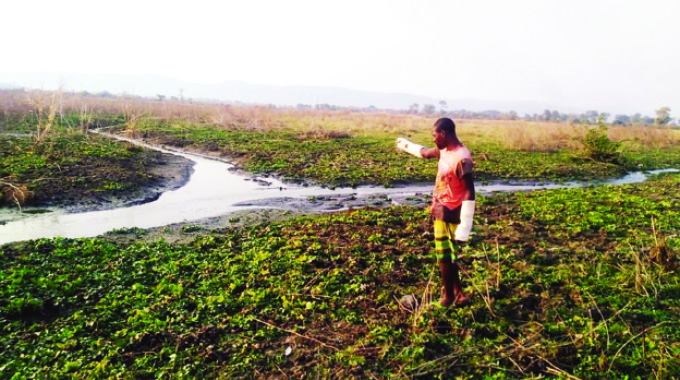 Tirabu is lucky to be alive after he was attacked by a crocodile while fishing in Lake Kariba recently. — Pictures: Walter Nyamukondiwa.

“It grabbed my left hand, but in a state of panic I did not scream or try to resist. By God’s grace I managed to maintain presence of mind and grabbed its mouth in a bid to open it with my right hand.”

“That gave me a window of opportunity to push my left hand further into its mouth,” he said.

The effort resulted in the crocodile opening its mouth and sneaking away leaving Tirabu free to tell the story.

His partner who was handling the other end of the net bolted in panic, leaving him to fight for his life.

Once free, Tirabu walked out of the lake only to discover that his hands had been seriously injured by the jaws of the crocodile.

Colleagues who were going about their business noticed what had happened and came to offer assistance.

He was taken to Kariba District Hospital where his condition was deemed to be serious and transferred to Chinhoyi Provincial Hospital.

The fisherman said life has not been rosy since falling victim to the crocodile.

“I went to Chinhoyi Provincial Hospital where I could not get much assistance as doctors demanded US$800 to attend to me,” he said.

“They insisted that I pay the US$800 which I did not have. This prompted my friend to explore other ways of ensuring that I got attention.”

Friends and relatives then pushed that he be attended at Mutenderi Hospital in Chirundu, Zambia.

After some time, they were told that Tirabu was now expected to have one of his hands amputated.

His friend Moses Sabana said they managed to take him to Mutenderi Hospital where they paid about US$20 to get him admitted and attended to.

“We were stuck after being told that we needed to pay US$800 which was later reduced to $500 after negotiations.

“He could not get assistance after we failed to raise the required amount,” said Tirabu’s friend Sabana.

A visit to the area where Tirabu was attacked showed that water levels had subsided leaving only a small stream.

Blackie has also retreated into the remaining waters where he occasionally rears his head to assert his dominance.

Fishermen who use nets and a technique known as kujobora, where a small net fixed on long sticks are used to scoop fish, said they live in fear of the crocodile.

Assuming a dark hue which has led fishermen to call it Blackie, the crocodile is usually spotted basking in the sun.

“When it is not basking in the sun, it is hiding in the water hyacinth waiting to pounce on unsuspecting fishermen and animals.

A fishermen identified only as John said they scout the area for Blackie before venturing into Lake to get fish.

“We come here and inspect if Blackie is in the water before we start fishing. It is only bravery to venture into the water at Green Waters because we have mastered how he operates.

“However, there are times when we miscalculate or when Blackie manages a perfect disguise where we fail to spot him,” said John.

Once spotted, it means automatic dismissal for everyone.

“He is the terror of Green Waters Bay who occasionally leaves the bay. He is now a hunter who patrols the shoreline. Whenever he arrives everyone is dismissed and goes home because he is bad news,” said John.

Several people have lost their lives along at Green Waters Bay which derives its name from the greenery as a result of weeds that grow from nutrients discharged from a nearby crocodile farm.

Where and when to plan your Kruger National Park Safari