Zimbabwe Sees Inflation as High as 53% at Year-End: Sunday Mail 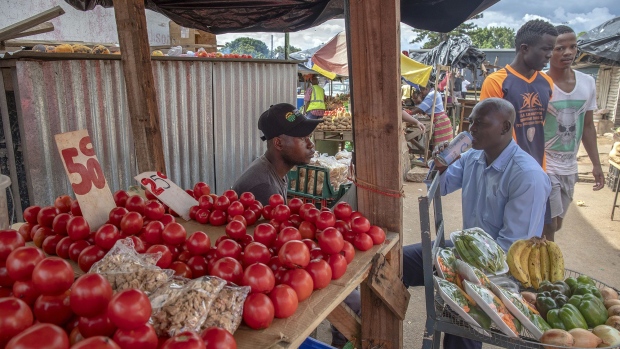 A vendor sits by his fresh fruit and vegetable stall as he waits for customers at a market in Harare, Zimbabwe, on Thursday, Jan. 17, 2019. Hopes of an economic revival in Zimbabwe lie in tatters 14 months after President Emmerson Mnangagwa took office, as the nation reels from foreign-exchange and fuel shortages, strikes and a dearth of political leadership. Photographer: Bloomberg/Bloomberg , Photographer: Bloomberg/Bloomberg

Zimbabwe’s central bank has revised its year-end inflation outlook for a third time, to as high as 53%, the Sunday Mail reported, citing John Mangudya, governor of the Reserve Bank of Zimbabwe.

“Annual inflation is likely to end the year between 35% and 53%, up from the revised targets of between 25% and 35%,” Mangudya was quoted by the Harare-based weekly newspaper. The bank’s initial annual inflation forecast for year-end was under 15%.

A rise in global commodity prices, a planned increase in power tariffs and a weakening of the local currency against the U.S. dollar on the black market were cited inflationary factors. Annual inflation rose in September to 51.55%, the first increase in eight months.