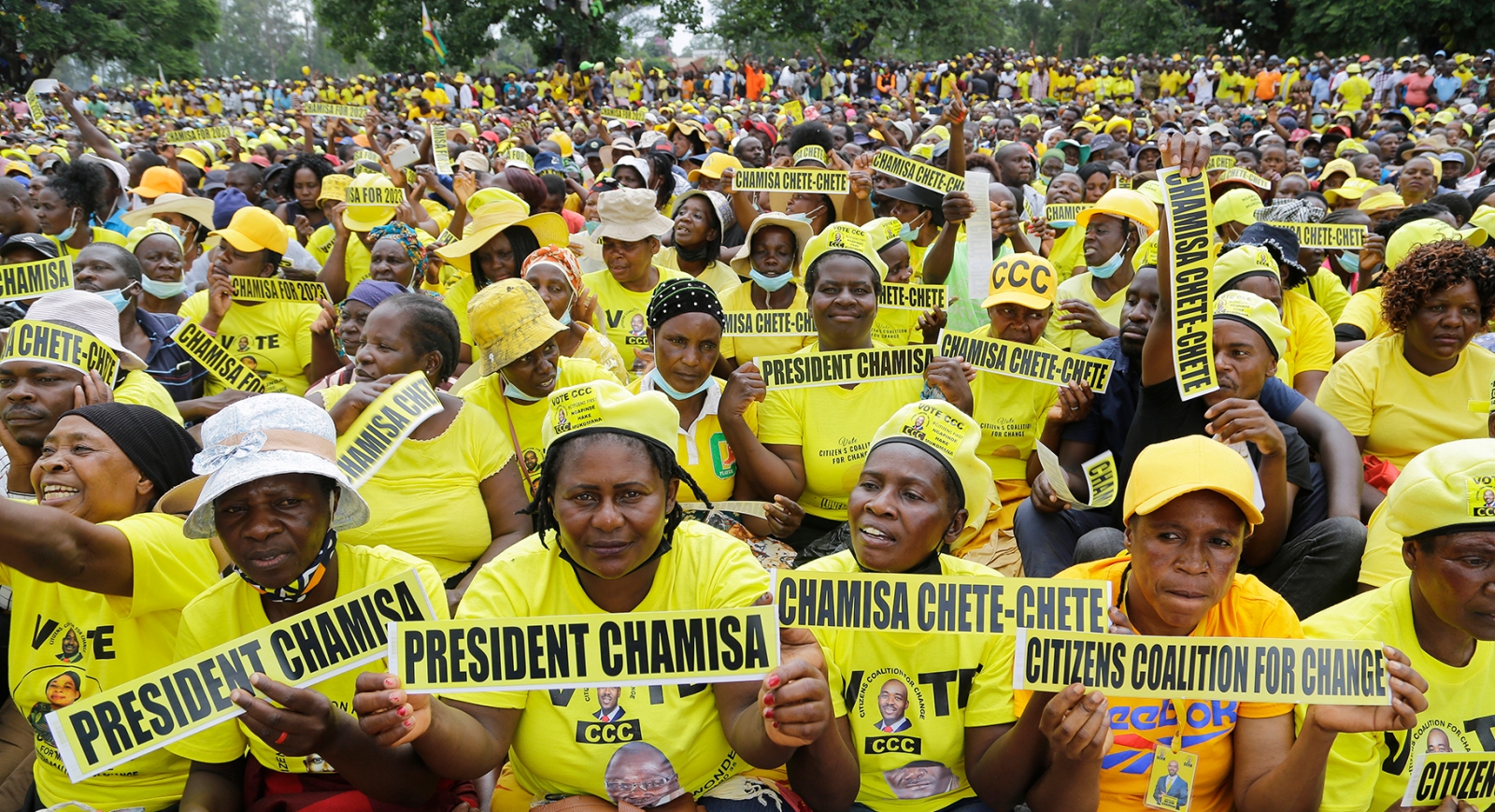 As by-elections approach in Zimbabwe at the end of March, seen as a dress rehearsal for the general election in 2023, the launch of a new political party has led to a marked escalation in state-sponsored violence against the opponents of Zanu-PF. The ruling party is back to its old tricks because it’s scared of democracy.

On Monday, 24 January, the former Movement for Democratic Change (MDC) leader Nelson Chamisa announced the formation of Zimbabwe’s newest political party, Citizens Coalition for Change (CCC). Chamisa explained that he and his supporters had dropped everything related to the MDC Alliance and had formed a new party and registered it with the Zimbabwe Electoral Commission.

The CCC has yellow as its colour and a new symbol: an index finger pointing upwards. Judging by the number of people that started wearing yellow from 24 January to date, it is evident that the party was well received.

The positive reception of the new party was met with an equally negative reaction from the Zimbabwe Republic Police (ZRP) and Zanu-PF militia, who have assaulted civilians wearing yellow clothes.

These are some of the attacks that have been recorded:

On 14 February, veteran activist and former MDC MP Tendai Biti, now a CCC candidate for the Harare East constituency, was arrested while holding a rally at Letombo Spar in Harare. The police refused to advise him and his lawyers on what charges they were arresting him. He was later released without being charged.

Days later, on 16 February, Biti’s campaign alleged that his supporters had been attacked for wearing yellow by thugs with iron bars. They reported the attack to the Mabvuku police station in Harare.

On 18 February, police were filmed beating up screaming CCC members whom they had arrested in Harare CBD allegedly for holding a car rally. In another video, police and a man in civilian clothing who was holding a sjambok were filmed forcing CCC supporters to crawl on all fours.

The CCC’s spokesperson, Fadzayi Mahere, confirmed that police had arrested 13 CCC members and were holding them at the Harare Central police station.

A day later, the 13 were taken to court handcuffed to each other. The way the police paraded them in front of the media in their handcuffs was clearly a message to everyone that if you dare support the CCC you will be arrested and tortured.

Before they had a chance to apply for bail, the magistrate who was assigned their case, Yeukai Nzuda, said she was tired and would not be able to hear the matter. It was a long weekend, which meant the 13 would be in jail until Tuesday.

This was seen as evidence of judiciary capture as the magistrate was seemingly colluding with the police to keep the political prisoners in custody without a fair hearing.

On 26 March, Zimbabwe will hold by-elections in 28 parliamentary constituencies with vacancies arising from recalls, deaths and the dismissal of MPs. In addition, there are 105 council seats up for grabs. Political commentators describe the elections as “a dress rehearsal for the general election in 2023” (watch a Sapes Trust discussion on the elections here), and it’s clear that Zanu-PF is already scared.

On 19 February the CCC decided to hold a rally in Highfields to launch its mobilisation for the upcoming by-elections. The police responded to their notification with a list of instructions that elicited outrage from CCC supporters. This was because Zanu-PF had held rallies and had not been given similar restrictions.

For example, one of the instructions read: “Busing in people from other constituencies is strictly prohibited.” Yet Zanu-PF had held a rally in Epworth constituency a few days before and had bused people from all over using state-owned Zupco buses.

The government was clearly in panic mode.

This was the first time Chamisa would be addressing a rally as leader of the new CCC party. On the day of the rally, dubbed #YellowSunday on social media, police set up roadblocks and caused traffic jams in a bid to prevent people from attending the rally. Some people decided to walk and some cycled to the venue. Despite the attempts to prevent attendance, the stadium was full by the time Chamisa gave his speech.

Zimbabweans from all over the world also watched the rally on Facebook Live and some followed on Twitter Spaces. The turnout on social media was unbelievable despite the erratic internet service. NetBlocks, a London-based organisation that tracks internet network disruptions and shutdowns, said the incident was “consistent with the slowing, or throttling, of service”.

The mood on the ground was electric. The crowd was singing and dancing and when Chamisa got on the stage the stadium thundered with cheers, whistling and ululating as the young and old endorsed his new political party.

Sending a warning to President Emmerson Mnangagwa and Vice-President Constantino Chiwenga, Chamisa said to loud applause: “One declaration we will make today, is that CCC will be the next government in Zimbabwe!”

After this, it was unlikely that Zanu-PF would allow Chamisa to hold another rally without trouble. True to form, on the morning of Saturday, 26 February, the CCC received news that police were revoking the permission earlier granted for them to hold a rally in Gokwe.

A letter signed by a chief superintendent, T Chikono, advised the CCC organising secretary that they were prohibited from holding the rally because police allegedly did not have enough manpower to provide security at the rally. They said this was because Mnangagwa was also holding a rally in the Midlands province, in Kwekwe, 140km away from Gokwe.

The CCC, represented by human rights lawyer Obey Shava, immediately challenged the prohibition in court, where the ZRP lied to Justice Sylvia Chirau, claiming that they had not issued an order to stop the rally. On that basis, the judge ruled that the only proof she had before her was that police had authorised the rally and the authorisation stood.

However, when the CCC got to Gokwe, they were met with maximum force from the police. Surprisingly, the same police that had claimed that the rally must be postponed as they had no manpower to provide security, had enough manpower to forcibly stop the rally. They fired water cannons and tear gas at supporters and unleashed dogs.

The crowds fled from the police but regrouped, leading to a chase between the police and defiant crowds.

This defiance was unexpected as rural supporters are known to be terrified of Zanu-PF’s ruthlessness. On that day, they chose to defy the unjust order to disperse. The rally continued as supporters decided to follow Chamisa’s convoy around.

While this was happening in Gokwe, 140km away, in Kwekwe, Zanu-PF was holding its own rally with no interference from the police. Vice-President Chiwenga gave a speech in which he told Zanu-PF supporters that there was nothing that the CCC would achieve as they, Zanu-PF, would “crush them like lice”.

Many Zimbabweans condemned the speech, saying Chiwenga was instructing Zanu-PF supporters to unleash violence on the CCC. Human rights activists said it was unacceptable for the vice-president to use such inflammatory language.

That Saturday night, CCC youths who were pitching tents in Chitungwiza constituency in preparation for a rally the next day were viciously attacked by Zanu-PF militia.

Despite the attacks, the rally went ahead. On the day of the rally, Zanu-PF youths abducted a CCC youth on his way to buy refreshments and beat him up with whips and metal rods. They then dumped him by the roadside and he had to be hospitalised.

That same day the CCC had another rally planned at Mbizo complex in Kwekwe. When the rally started, small groups of suspected Zanu-PF youths attempted to disrupt it. They tried several times to cause commotion but the crowd managed to stop them each time.

When Chamisa got on stage a group of men carrying stones, machetes, spears and petrol bombs descended on the crowd. Chamisa’s security quickly whisked him away but not before he said to his supporters, “Please keep calm, do not be violent.”

The militia threw stones at the CCC supporters and attacked them with spears and machetes that left several people hospitalised. One CCC supporter, Mboneni Ncube, was stabbed and later died from the wounds.

The level of violence has sent shockwaves through Zimbabwe as the public witnesses people using spears and machetes against defenceless citizens peacefully striving for change.

On Monday, police claimed they had arrested 16 Zanu-PF youths responsible for the violence. They said they had been apprehended while hiding at Jersey Gardens about a kilometre from where the violence occurred. Jersey Gardens is a property allegedly owned by the recently fired minister of state security Owen Mudha Ncube. The 16 youths were charged with murder.

While it is encouraging that police quickly arrested the suspects, it is unclear why they did nothing to stop the violence in the first place. The previous day, the same police had unleashed tear gas, water cannons and dogs on a peaceful crowd, but in the face of a violent confrontation, they chose to allow the attacks to happen. DM/MC