DD – a true hero who, even on his sickbed, urged me to continue struggle for justice and better life for all Zimbabweans

If ever I was to be asked my definition of a hero, without any hesitation or faltering, I would sum it up in only two words – “Dumiso Dabengwa”, as that name is the personification and epitome of everything that the word ‘hero’ stands for – gallantry, selflessness, humility, love, kindness, and gentleness.

Source: DD – a true hero who, even on his sickbed, urged me to continue struggle for justice and better life for all Zimbabweans – The Zimbabwean 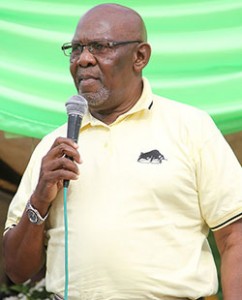 Yet, before the year 2016, the only knowledge I had of this gentle giant, both figurative and literally, was largely through my study of our country’s history – especially, his (and other valiant liberation struggle icons) self-sacrificial and indomitable struggle for Zimbabwe’s independence from colonial rule, whereby he earned the adoring monicker of the ‘Black Russian’ (which I gather was due to his, and other ZIPRA cadres’, military and intelligence gathering training in Russia, and his fluency in the language).

Of course, the other platform where I got to learn about this man, who was also affectionately known simply as DD, was through his immensely invaluable and immeasurable contribution towards, and the fight for, social justice and a better life for all Zimbabweans – a feat that did not go unpunished, as the ZANU PF regime subjected him (and other principled genuine liberators, such as the late Father Zimbabwe, Joshua Nkomo), to untold suffering, persecution, and brutality, which culminated in the notorious 1980s Gukurahundi genocide, when over 20,000 innocent civilians were massacred in cold-blood by the military’s 5th Brigade, mostly in the Midlands and Matebeleland provinces.

A crime which is still unaccounted for today, as no one has been brought to book for such heinous and blood-thirsty atrocities.

As much as he initially agreed to be part of an Inclusive Government – formed when his party ZAPU, reluctantly agreed to a unity accord with ZANU in 1987, as the only means to stopping the merciless and senseless butchering – he, nonetheless, never subscribed to the ZANU PF regime’s repressive, destructive, and corrupt policies, as well as unquenchable thirst for innocent blood, thereby breaking away from this ill-fated unity arrangement, after the passing away of Father Zimbabwe, and reverting to ZAPU.

However, the turning point in my knowledge of this highly principled and upright man, was when I was introduced to him by a dear friend of mine – veteran broadcaster, and renowned author Jill Baker – in 2016, something I consider as one of the most impactful event of my entire life.

Having read and studied so much about the ‘Black Russian’ – a hero amongst heroes – I never expected him to take any notice of me, let alone want anything to do with an unknown nobody from Kwekwe.

Yet, not only did the man I later got to refer to simply as DD – as did all those close to him – took a strong interest in me and my activities, particularly my social justice writings and activism, and would often call me, talking for hours – the cementing of this new friendship being his invitation to meet him whenever he passed through Kwekwe, or when I was in Bulawayo – his home base.

I had never experienced such humility in my life, whereby a person, whose status was larger than life – and, should have been too ‘big’ for me – would exhibit such genuine and unpretentious interest in anything I did – yet, he effectively placed me under his wings, as a mentor and father figure.

As much as I had started writing social justice articles for local media since 1989 – when I was still doing my Form Three, at Kwekwe High School, after witnessing the depth of the ZANU PF regime’s depraved heartless sadistic cruelty – I had not been very prolific in my contributions, but as a direct result of DD’s inspiration and encouragement, my passion, which had already been within me, for a better Zimbabwe for all Zimbabweans, was ignited into a raging fire, if not an inferno.

It was as if, he had passed on his gallantry, and unsurpassed love and passion for the people of Zimbabwe down to me – I felt like an Elisha in the presence of Elijah.

However, the most touching moment in this great and unforgettable journey with DD – short as it was – was when he phoned me sometime in 2019 – whilst, I was attending to some business in the Kwekwe CBD – at which, he broke the news that he was seriously ill (although, I had known that he had not been well for some time, but this time he was critical), bedridden in a hospital in South Africa, and that he did not believe that he would make it, but urged me never to give up the struggle for justice and a better life for all Zimbabweans, further adding that, my articles were keeping him strengthened during that most painful time.

I can never forget that day, as immediately tears started flowing from my eyes, right there in the city centre.

As the nation, and all those who knew the great man DD, remember him today – a day that he would have turned 81 years old – one can not help be inspired by a renewed sense of energy, determination, and urgency to advance the cause of the millions of politically and economically marginalized, subjugated and impoverished citizens of Zimbabwe.

The struggle for Zimbabwe is not over, and continues with an intensified vigor and resolve – as the only true way of commemorating amd celebrating this gentle and humble hero of heroes, and giant of giants – since, all that he ever wanted, since the day he joined the liberation struggle, was to see each and every Zimbabwean live a dignified, respectable, and honorable life, that they surely deserve…yet, cruelly denied by a ruthless, selfish, and kleptomaniac elitist ruling clique, that feels entitled to all this nation’s wealth and resources, whilst the rest of the population suffers in abject poverty.